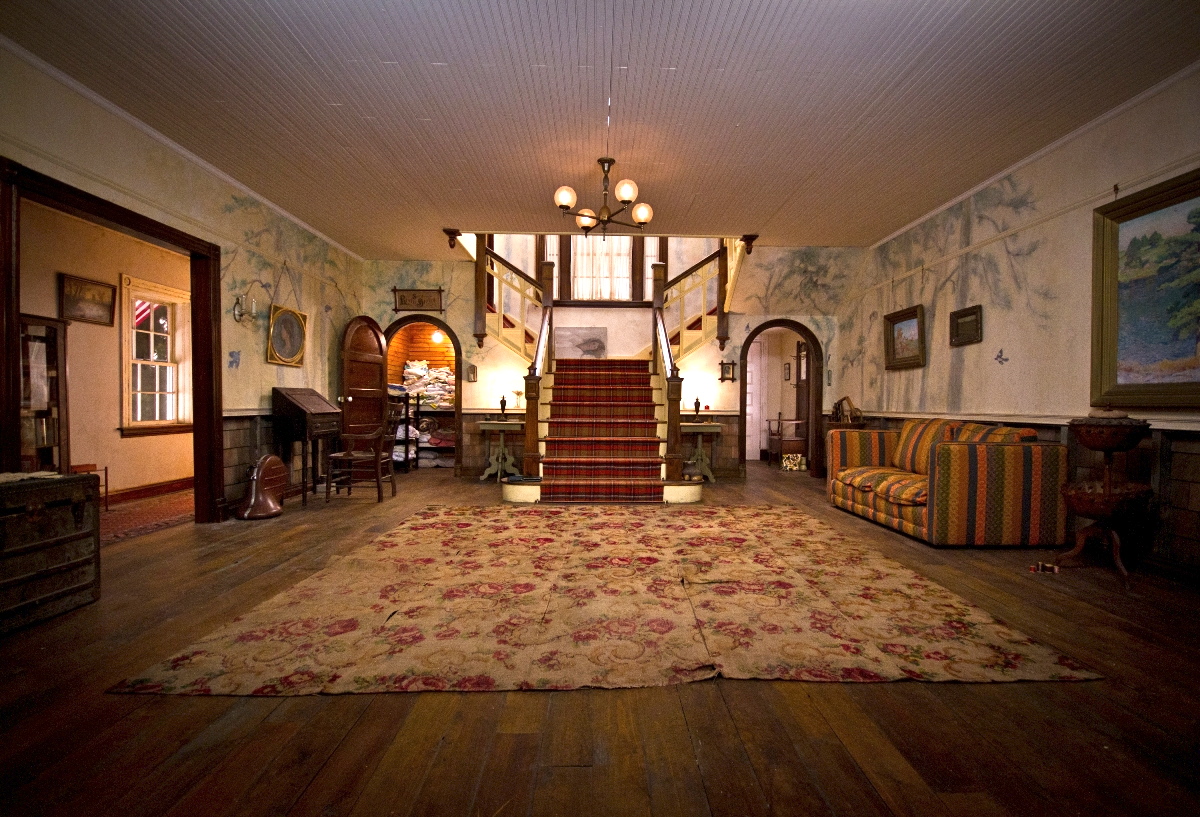 Have you seen Moonrise Kingdom?
It's an adorable movie about young love set in 1965 on a fictitious island.
Within the first ten minutes of the movie, I lost count of plaid sitings.
Beginning with the tartan plaid stairs! 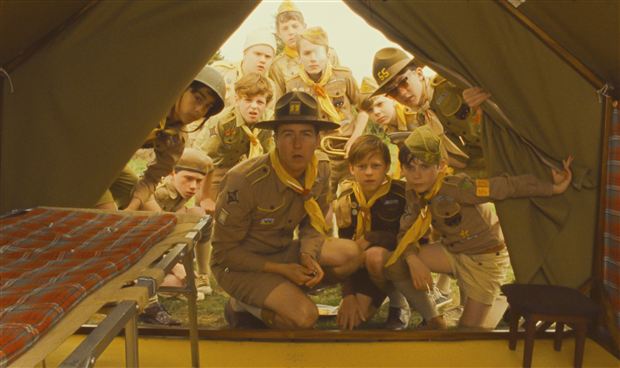 When 12 year old Sam decides to leave his troop and run away with 12 year old Susie, the first to discover his absence was Scout Master Ward and the rest of the campers.
As the tent was unzipped, I was amazed that the whole inside was lined in plaid, including his plaid sleeping bag!
"Jiminy Cricket, he flew the coop!" 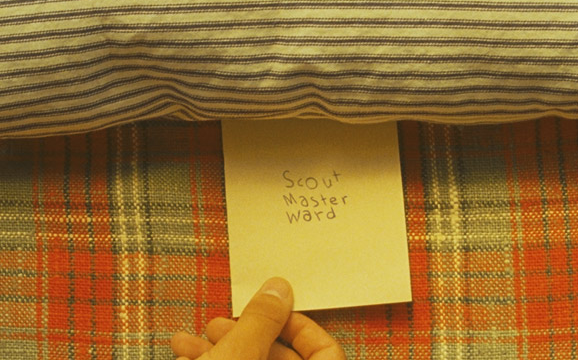 A close up of the note Sam left for Scout Master Ward.
Love the ticking and plaid! 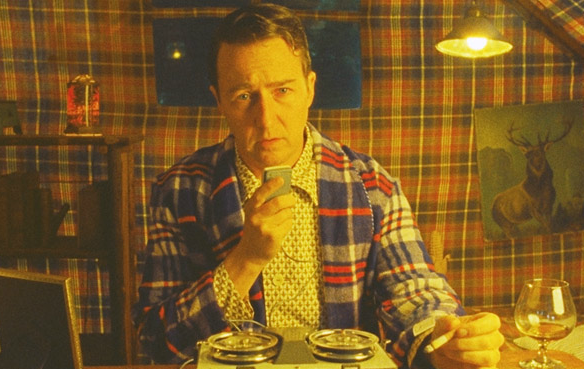 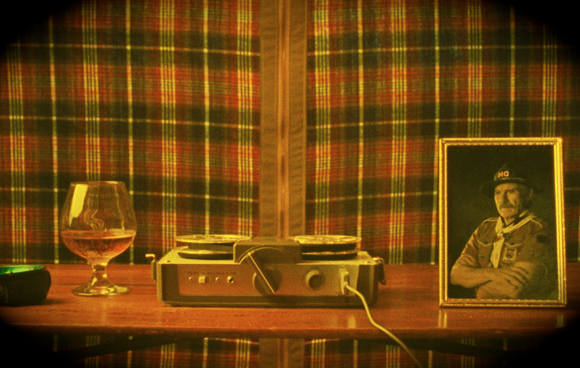 Of course we all know that tents don't exist with plaid lining.  Only in the mind of the director, Wes Anderson and the production designer, Adam Stockhausen.
It was all part of the nostalgia invoked in this movie. 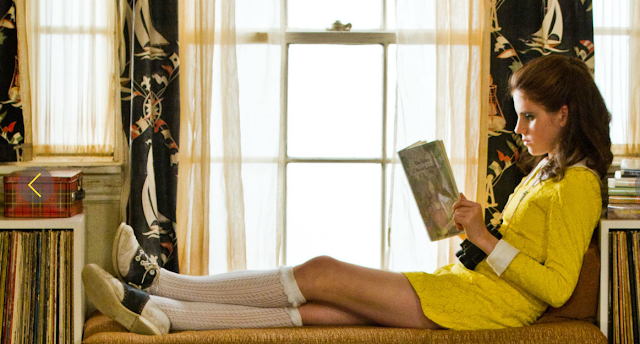 Here's Susie's reading nook.
Love the plaid lunch box!  I have the same one!
Oh, and I had those very same shoes back in the early 60's.  I think they were called saddle shoes! 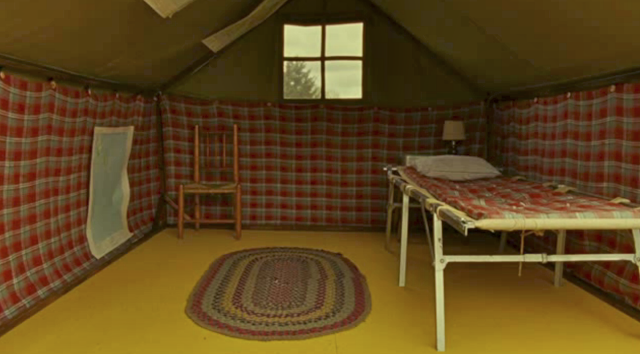 Another interior tent shot.
The set design is amazing, with such attention to detail harking back to a simpler time when we listened to records on record players, read library books and made phone calls with rotary phones.
It was quite nostalgic for me! 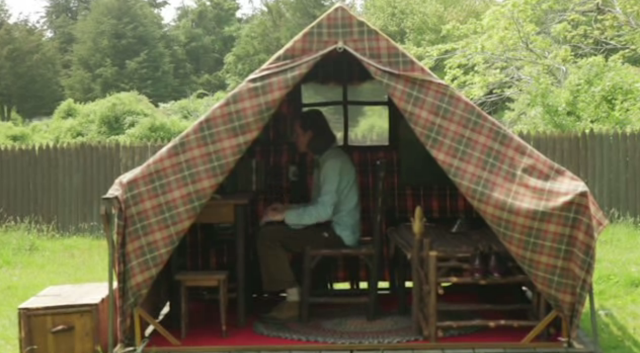 The director, Wes Anderson inside the tent.
If I could, I would love to ask him if he is obsessed with plaid as much as I am.
I've noticed several photos of him in plaid shirts or a plaid scarf, so I would imagine he is.

Here is the official trailer to whet your whistle.
Check it out!

Was this movie made just for YOU?
Perfect. ha ha
I love the nostaglic feel from these pics. Looks like a cute movie.

Delores, I saw this delightful movie while in Santa Fe earlier in the summer. I thought at the time, plaid is so 60s! Perhaps that is why I'm still in love with it. I think the tartan stairs are my favorite. Thank you for pulling this post together. Very clever of you. ;-)

I'd definitely recommend this movie, even if one isn't a fan of plaid. LOL
Have a perfectly plaid kind of day..........Sarah

Delores,
I loved this movie and the plaid had to be a subliminal reason! Such a fun story and probably my favorite Wes Anderson movie ever.
Karen

Now I'm dying to see the movie! Loved all of the plaid! Very Ralph Laurenish! I had those same shoes as well! Glad you shared this fun and great looking post! I would go camping if I had a tent like that!

YOU HAVE SUCH AN EYE FOR DETAIL!
My husband and I thought the moving was cute.

Delores - I was thinking about watching this movie....definitely will now. You see, I'm also mad for plaid :-) And, I heard the movie is quite good.

BTW, do you remember the Vogue Sept 1991 issue with Linda Evangelista in all plaid and on the cover?
xoxo,
Loi

I saw this movie and LOVED it! So did my Mom. The set decoration was amazing. I especially loved the house on a rainy day. He captured exactly how it felt to be inside on a rainy day when I was a kid. Yes, vey nostalgic and a super good movie too.

This is so much more than i needed!!! but will all come in use thanks!!
Landscape designer VA