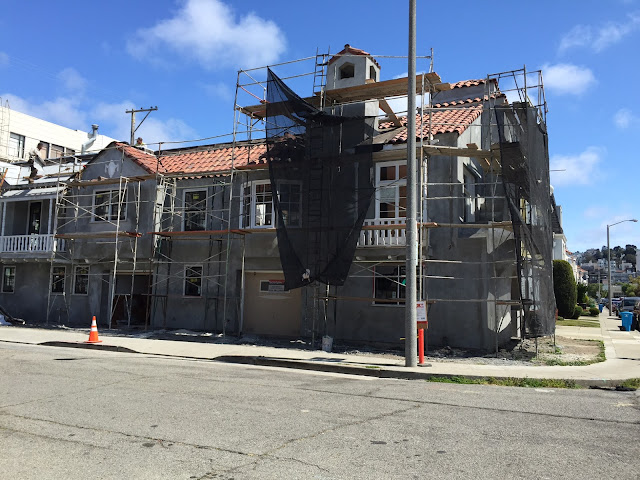 "When will the house be finished?"
Well, that is a good question!  We've had a few setbacks and I'll admit that I'm a little discouraged.
We don't have sheetrock yet, but I'm hoping by the end of the month we do. 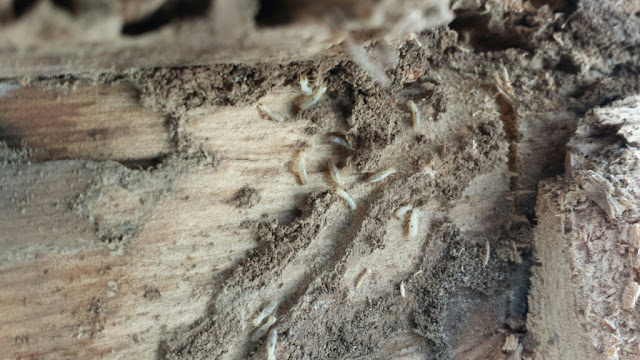 One of the first setbacks was finding live termites and dry rot in many places.
I guess that's the advantage of having the entire house opened up.
The good news is that we exterminated them and repaired the rotten wood. 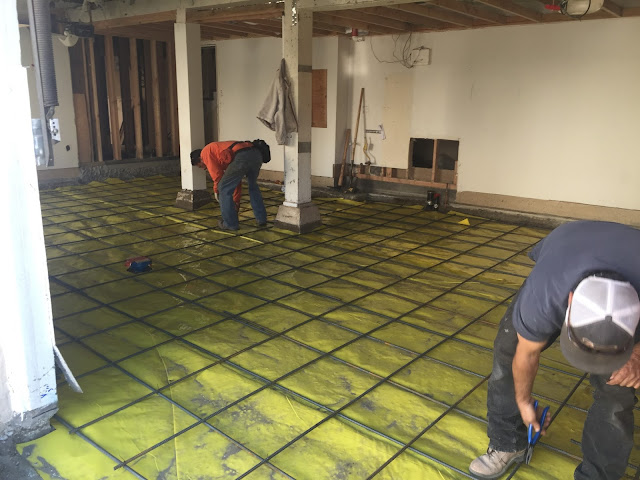 Another surprise was finding out our garage floor was only an inch and a half thick!
So, it was jackhammered up and new concrete was poured over rebar.
Now it's not only thick, but safer--especially if we have an earthquake. 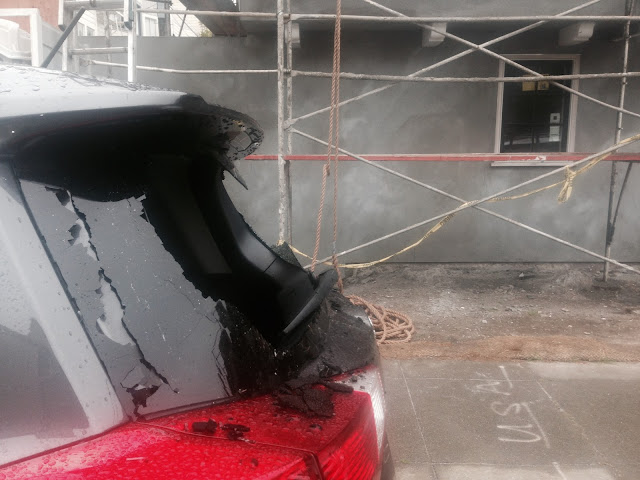 The one setback that really got to me though was when thieves broke in to our house and stole the contractor's tools, building permits and job cards.
As you can see, they even broke the window of a car parked in front.
Just for fun.
I mean, who does that? 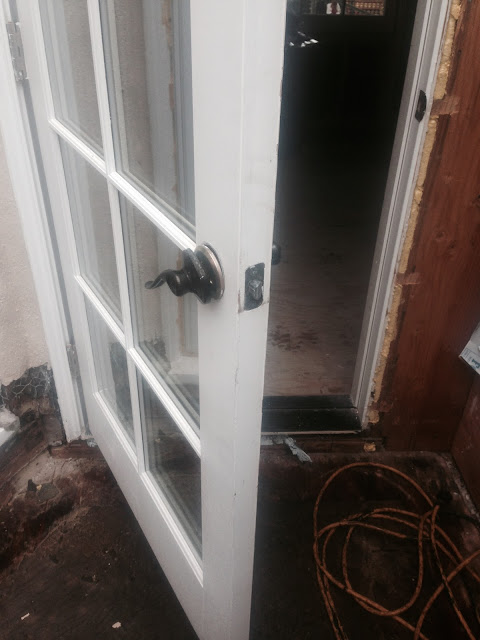 They literally climbed up the scaffolding to get to the roof, then went down into the atrium and broke the lock on the kitchen door to get in. 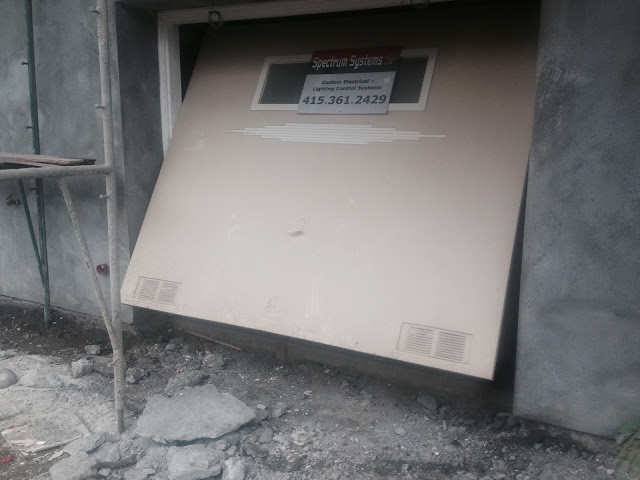 Then to get out, they forced the old garage door open.
I'm so thankful my new garage doors weren't installed yet and that they didn't break any new window glass to get out.

Today, the scaffolding came down.
To celebrate, I bought four quarts of paint to sample on the stucco.
The concrete will be poured this week for the sidewalks and "driveway."
Things are shaping up!
Trying to stay positive here....

Posted by vignette design at 5:27 PM

Oh D!, that is just terrible. What a world we live in anymore. You are totally rebuilding this beauty, and it will be glorious when it is all done and you put your touches on it. Hang in there. Waiting is hard and you have already been into this a long time, but there will come a point when everything will start moving quickly. Thinking of you,
Kathysue

Oh my goodness. Hang in there to say you could write a book about your adventure is an understatement. Thinking good thoughts for the rest of this journey. fondly ~lynne~

I think you've had more than your share of problems. A friend of mine always says do not ask the universe 'what next' - because it will answer thinking you want more problems.

Oh, no! Sad to hear about all these issues. Why would they steal the permits?
Hope it is easy to resolve all of this. The structure improvement will be for the best. Glad you found that their was a problem before completing the remodel. Keep a positive outlook. You'll be finished and look back on this with a big smile.

I am so sorry to hear that Delores!! How awful. Just hang in there. If your previous house is any indication, this house will be drop dead gorgeous and it will all be worth it! I for one can NOT wait to see everything you do!

I am so sorry, you are just getting hit from every side! Keep your chin up and I hope things start getting better and you get sheetrock soon!

Sorry about all of those set backs. Keep your chin up Delores! Everything will work out in the end! If there's a will there's a way!

I am so sorry to hear about all of the problems that cropped up! Sending you good vibes for smooth sailing here on out!

I would have bought 4 quarts of ICE CREAM!

Oh, no! I'm so sorry to hear of all of this happening and the break in. So glad you weren't living in your house when they broke in. What's this world coming to? Sending good luck vibes your way.
Be a sweetie,
Shelia ;)

hi Delores,
So sorry about all your troubles. It's shocking and sad to be a victim. Lately I've heard of so many jobsite burglaries, it makes you wonder. I'm glad no one was hurt and that there wasn't more damage to your beautiful (soon!!) house. And, on the positive side, it's great you found the termites and rot now, rather that later!! Yuck just imagine the trouble that would have been!! Now all you can do is try to stay positive and hang in there, before long you will be moving in to your gorgeous new home and arranging furniture!
xo Heidi
PS We had another tree down here!! It closed the road overnight, stranding some people, and took out the power to 15 families , some still dealing with it. I am starting to wonder if living in the woods is such a great idea!!

I had to unsubscribe, but I will try to resubscribe. Some ads kept popping up in front of your post, so that I could not see the post and they would not go away. I was able to go directly to the post without a problem.

I am so sorry this series of bad luck events has happened. I guess you have to ask yourself if you really want to live there. If you do, then persevere. If not, then sell it!

Well, what color of paint is the stucco going to be?! : - ) So, personally I think the kind of person that "does that" doesn't believe in Hell. At least I wouldn't do it bc I do.

Construction sites are common targets for vandals and thieves. One thing you can do is hire a person to stay on the job site at night. You can install closed circuit tv cameras that give a continuous feed off-site. As you add more to the house, especially appliances, it is even more common to have thefts and break-ins....thieves can be the people working on the job site, the delivery crews, or the neighbors watching and waiting. I assure you, I live in an upscale area, and this happens continuously. A prime score for theft is copper wire.
You have to decide how vigilent you will be.....

We're sorry that this happened. People can be real jerks. You need to know your blog followers are thirsty for more. These pictures are terrific! I love seeing the placement of the house, the roof, the workers in action. Show us your dirt! It is soo interesting to watch the Phoenix rise from the ashes!

you're doing it right: get the whole thing done instead of piecemeal (like me). don't be discouraged about your theft, short of having a guard seated in front of the property with a shotgun and another seated at the back of the property and then a guy with a dog who walks the perimeter, it's almost impossible to prevent thefts from a construction project (i'm a do-it-your-selfer/owner-builder/retired cop and i had a thieving dry wall guy.....). grit your teeth and install cameras, if you can. if neighbors have cameras, ask them to train one on your property. be sure that all of your tools and your subs' are marked with driver's license number in BIG UGLY LETTERS. take photos of the space with the tools, every night if possible, so you can provide that info as necessary. be sure to make police reports and provide as many numbers as possible for entry into the computer. you'll soon be enjoying your beautiful home and the termites will be a fleeting memory.

Son of a gun, that plain stinks. Wise words from your readers and I am sorry. Chin up buttercup!