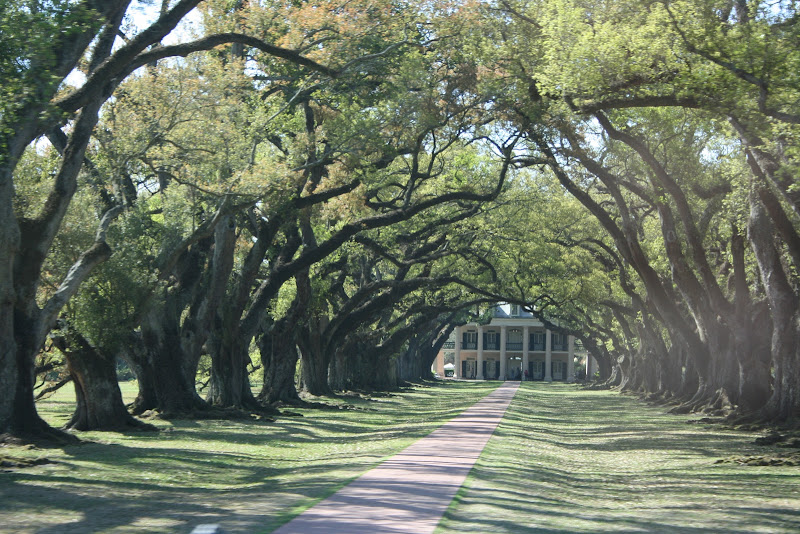 What a treat to visit Oak Alley Plantation!
Situated on the Mississippi River, it is one of the few preserved plantations open to the public near New Orleans.

This Greek Revival home was built in 1837 and was situated to take advantage of an alley of oak trees that were planted by early settlers in the 1700's.

These trees are 300 years old and are expected to live another 300 years! 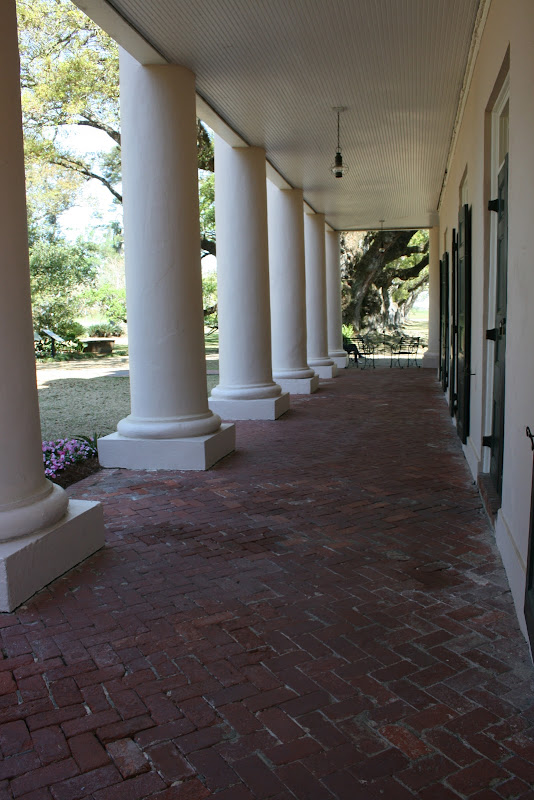 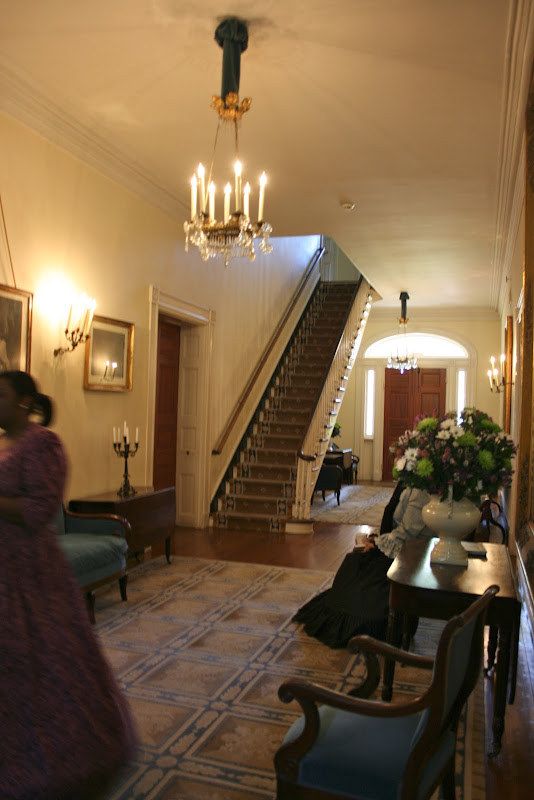 Starting with the grand entry. 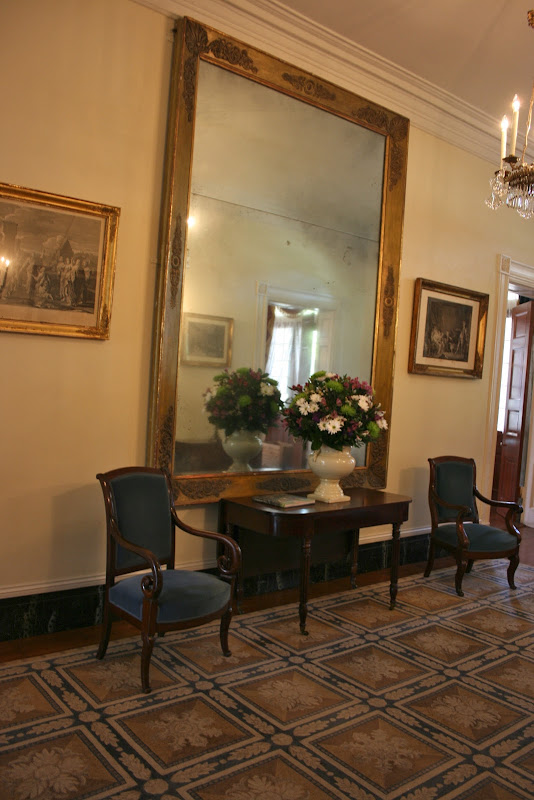 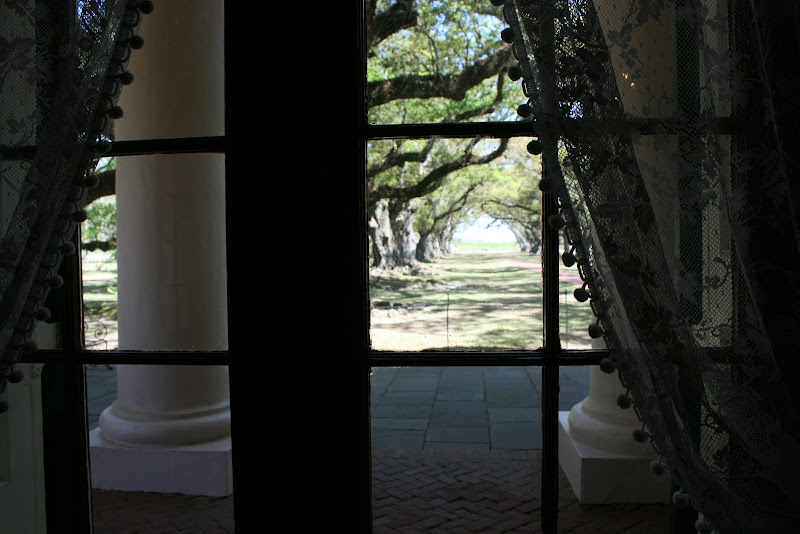 A large veranda, as seen from the living room, surrounds the entire home, both top and bottom, providing shade during the hot summer. 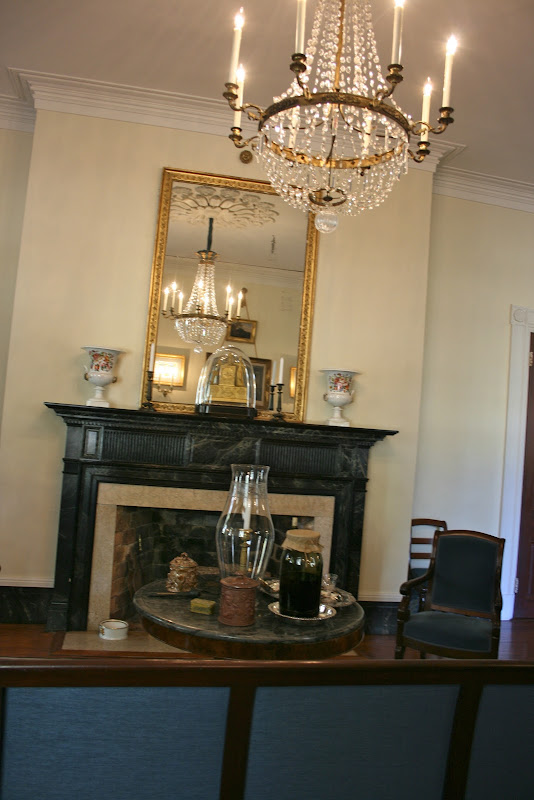 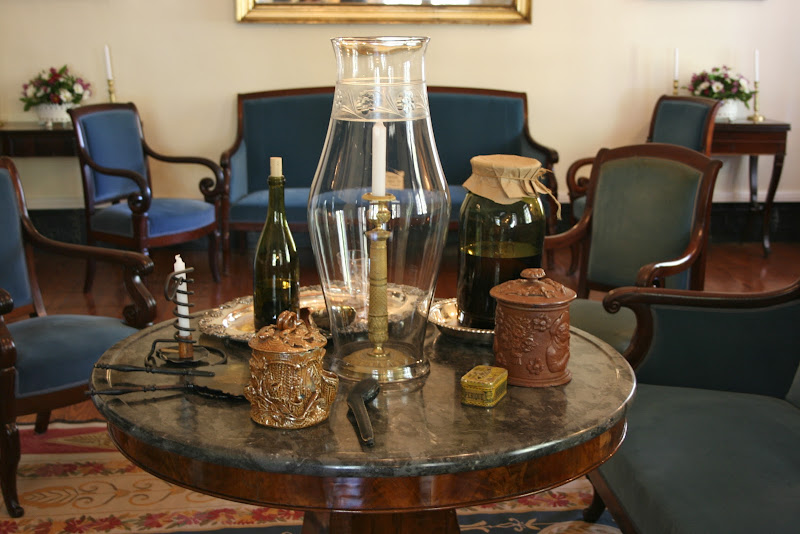 The parlor table is set with rum for the men, and a jar of fruit soaked in rum for the women.
Since it was unseemly for women to drink liquor, they got around it by eating the rum soaked fruit! 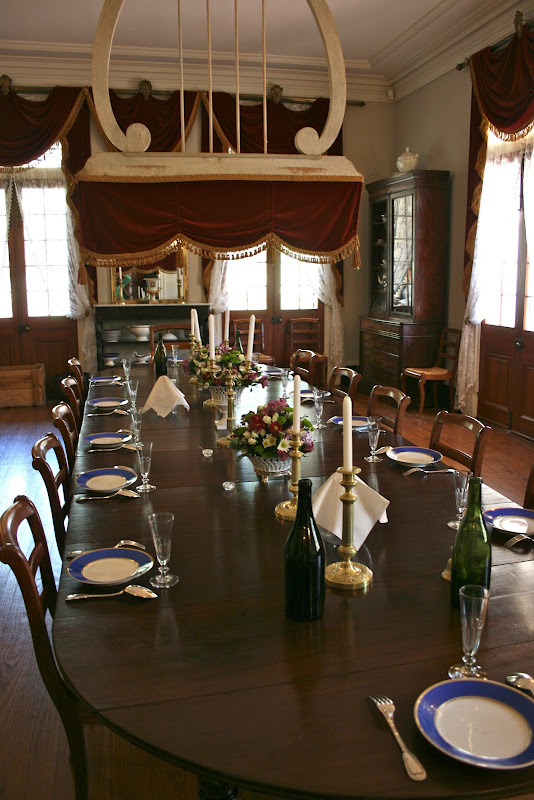 The dining room can seat 16 people. 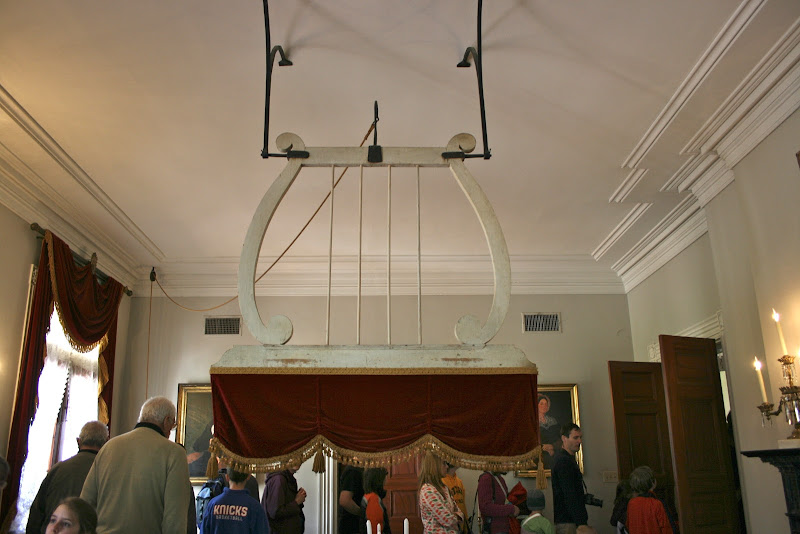 The large object hanging from the ceiling is actually a fan, not a chandelier.
A rope is attached to it, and during dinners, a slave would stand in the corner and pull it so the guests were fanned.  There was an art to this:  too much and the candles blew out! 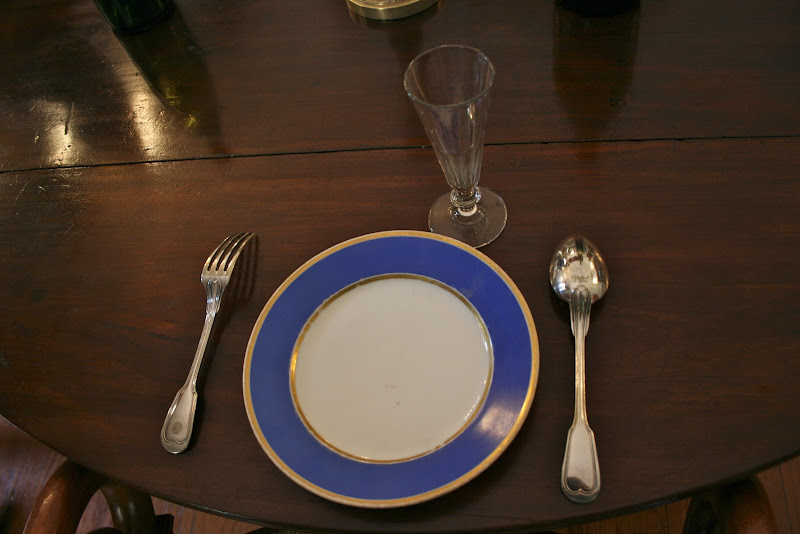 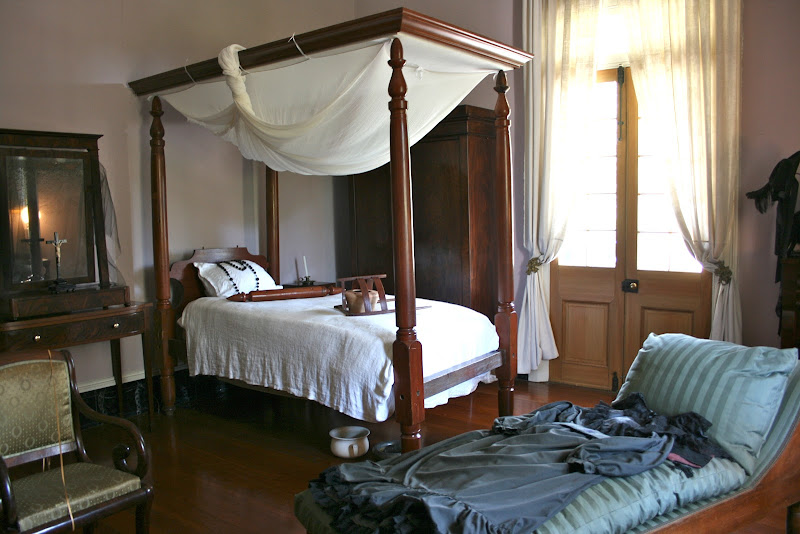 At the top of the stairs is the mourning room.
When someone died, the body was laid out for viewing here.
The room was also used as an isolation room when someone was ill.
Yellow Fever was common and two of the original owner's children died from it. 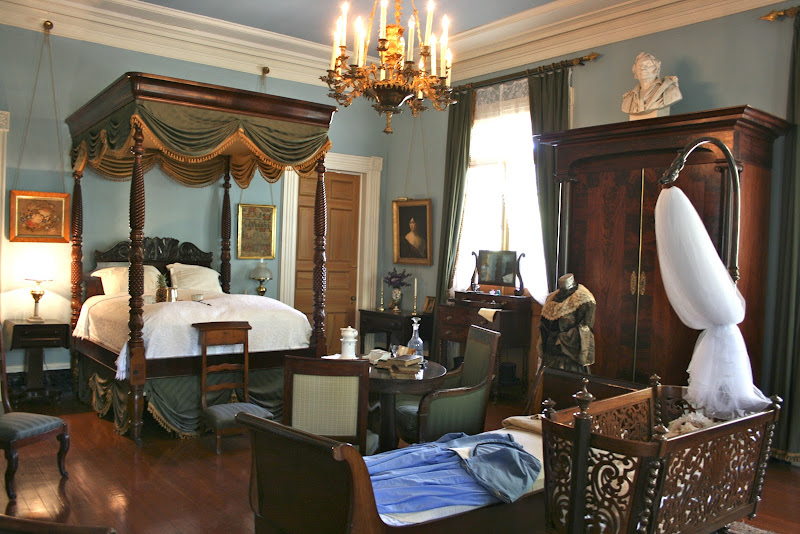 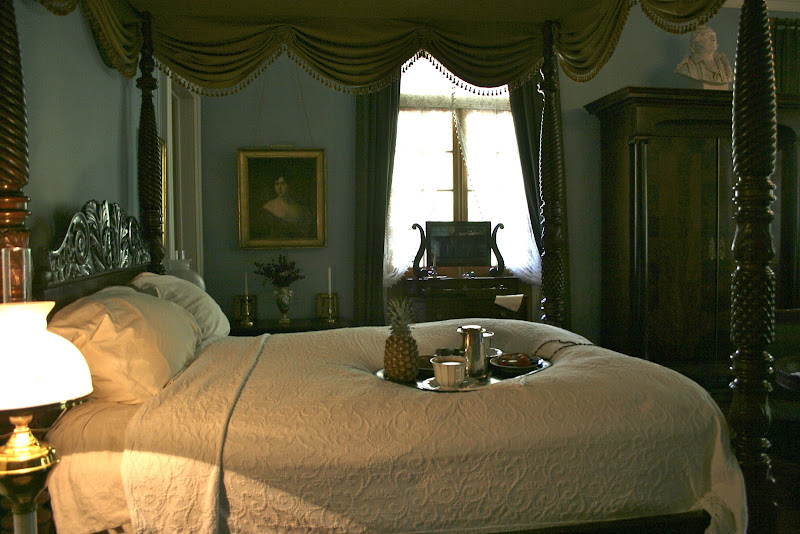 ...with a gorgeous hand carved bed. 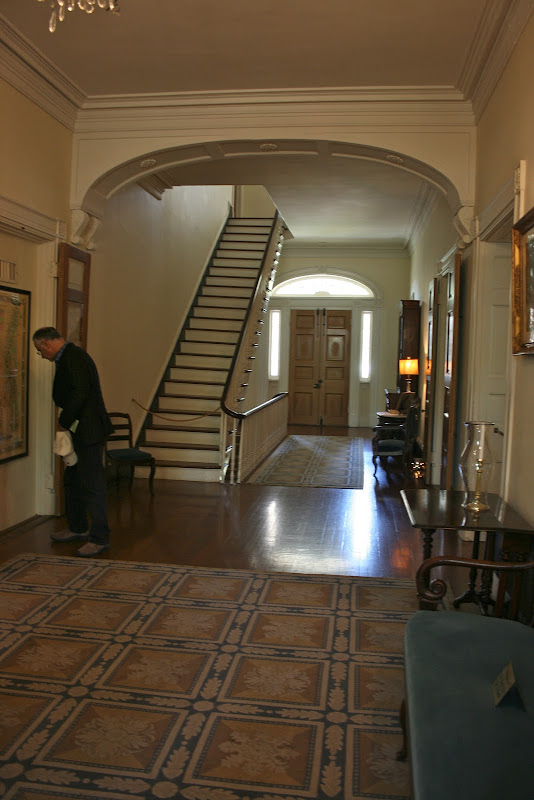 The upstairs hallway.
Notice the stairs going up another floor.
Unfortunately, we didn't get to explore up there. 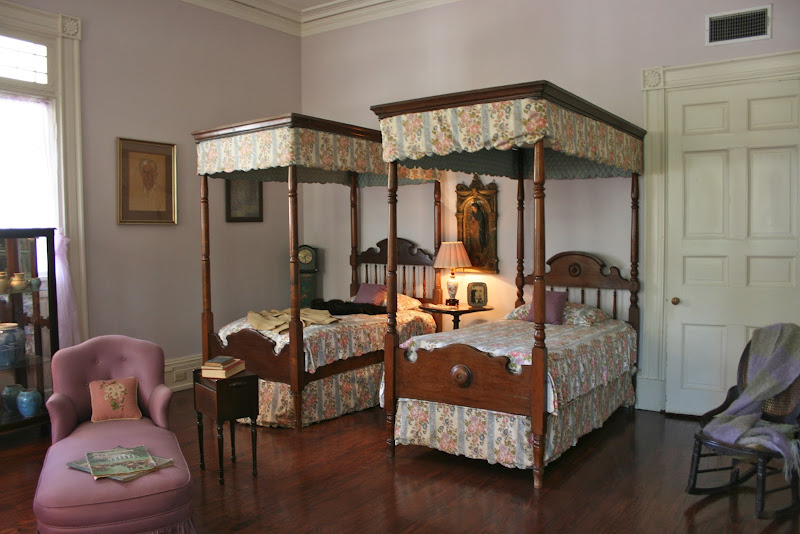 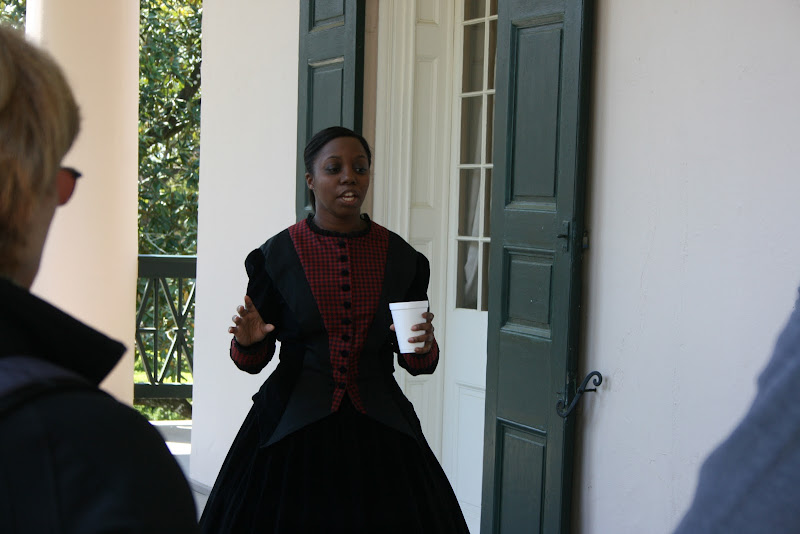 Our tour guide in costume. 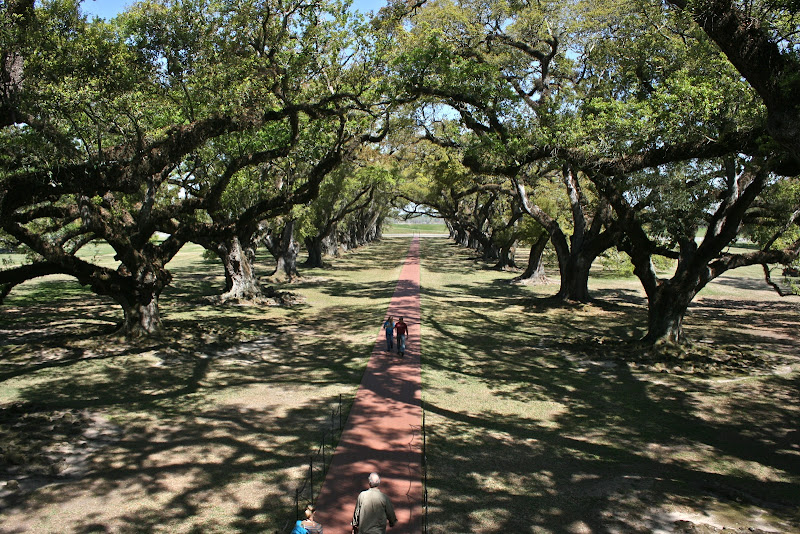 This is the money shot!
A breathtaking view from the veranda, looking down oak alley towards the Mississippi River. 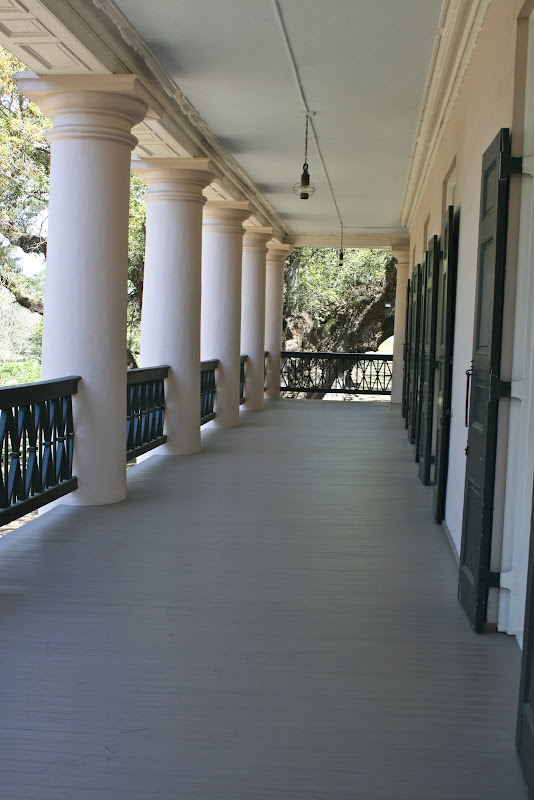 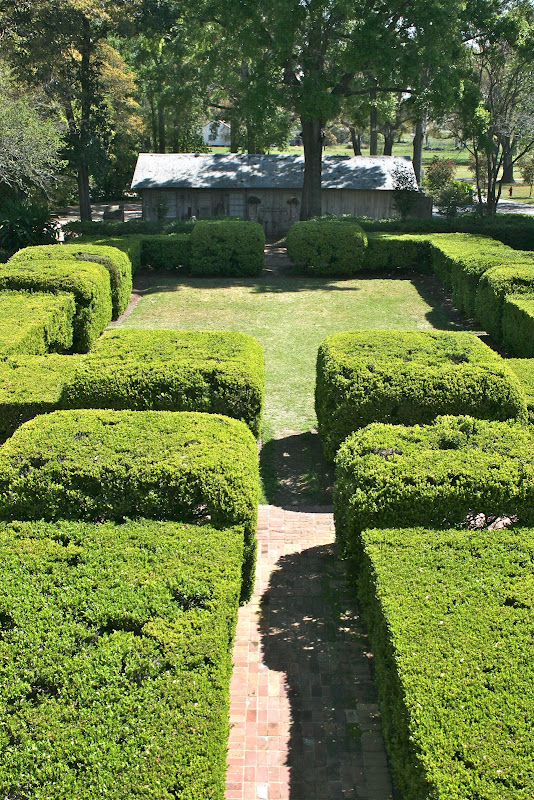 Outside, there are beautiful boxwood gardens planted by the last owner, Mrs. Stewart.
At one time there were roses too.
The building in the distance is a garage with two antique cars. 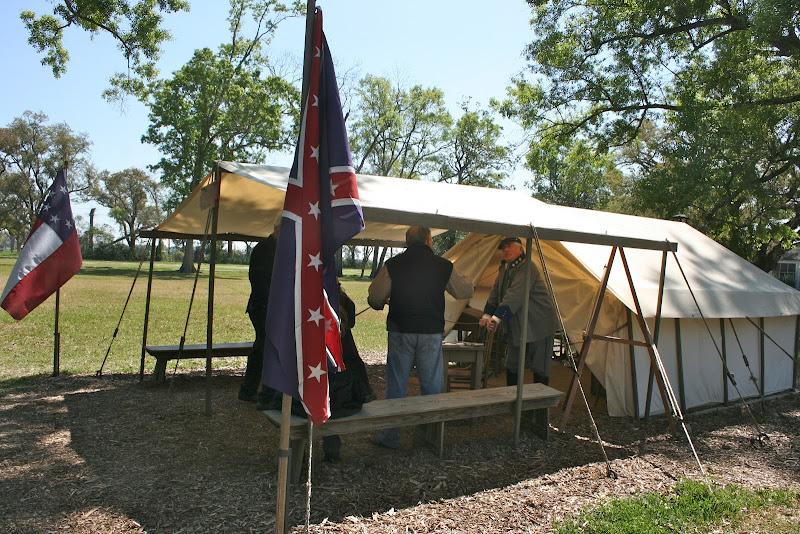 There is a Civil War replica tent set up on the grounds. 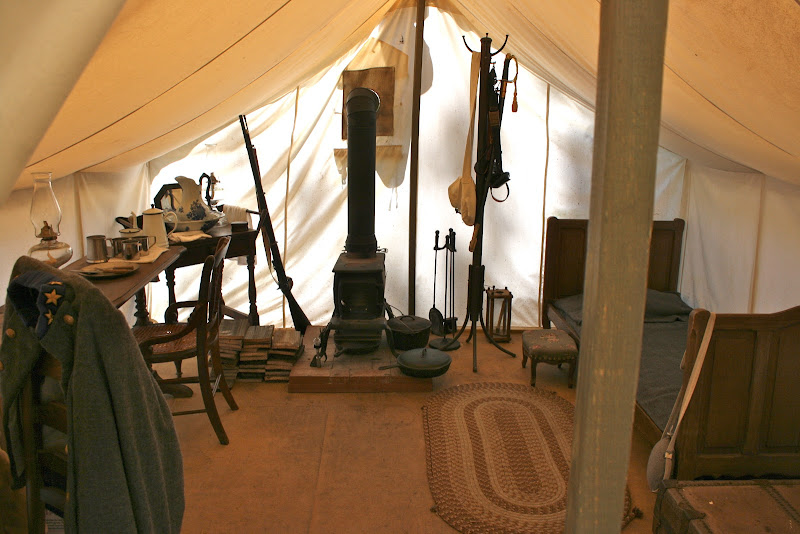 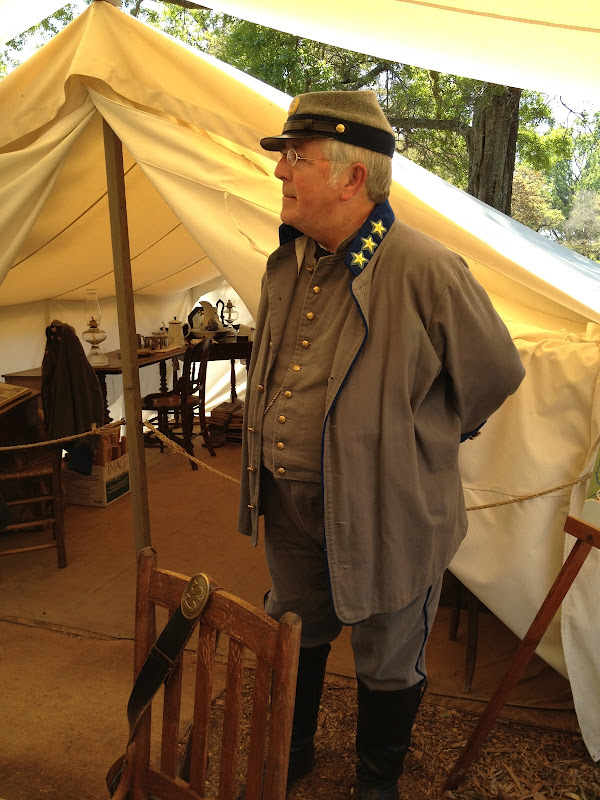 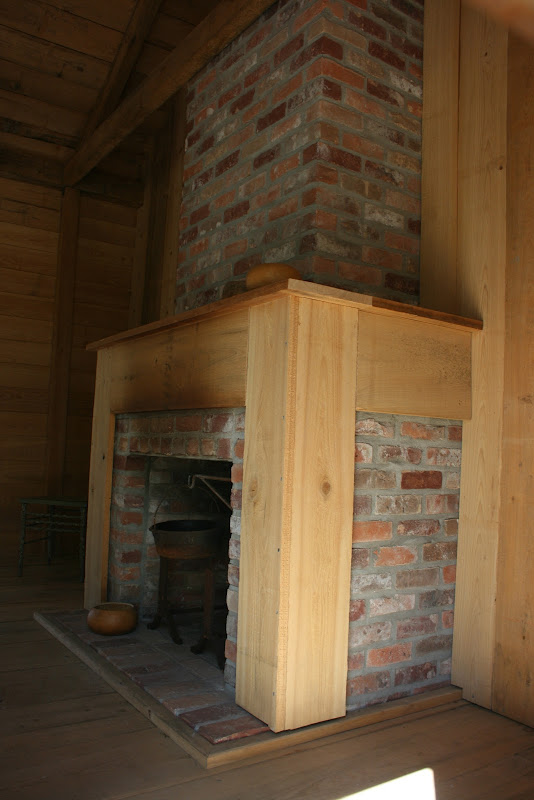 Recently, Oak Alley Foundation reconstructed a slave quarters exhibit.
This is a typical fireplace in one cabin. 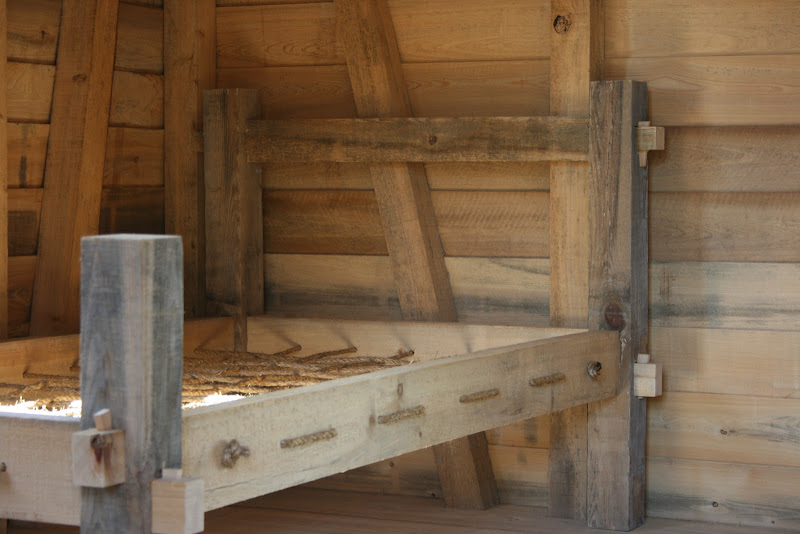 A mortise and tenon rope bed. 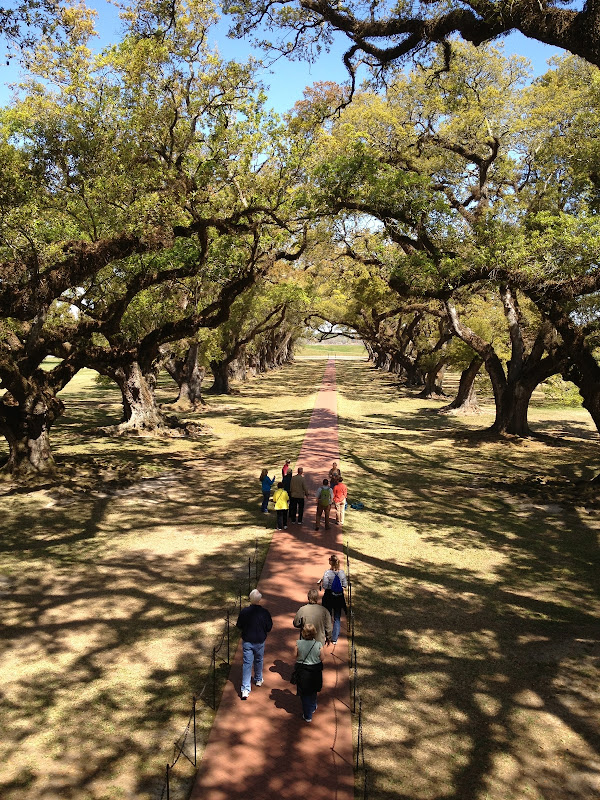 Seeing Oak Alley Plantation was worth the two hour bus ride from New Orleans.
It felt like we were back in time during the Antebellum South days.

For more information, watch this short video, or visit their website here.

Posted by vignette design at 6:33 AM

Thank you for taking us to this historic plantation. They really knew how to create a place that could withstand time and the elements back then. Amazing home.

Lovely location for amazing photographs. Definitely worth the bus ride.

Thank you for your blog and beautiful pictures of this historical plantation. I would hesitate to call it the South's golden days since it was dependent on human bondage.

Oh honey, you are making me homesick. I grew up two hours north in Alexandria.

Glad you are back in bayou country. I am from there. Oak Alley is where Tom Cruise vampire movie 'lestat' was filmed.

Gorgeous! So wish I could go tour!
Blessings,
Cindy

Thanks for the tour. Your pics are great and your story line perfect. I felt like I was there with you.

Looks like you two are having a grand tour through the south. Enjoy! Wishing you a Happy Easter Weekend. ~ Sarah

Hi D! What a wonderful experience! So fun seeing it through your eyes.You and Mr. A are having a wonderful trip!So happy for you both. Enjoy the rest of your trip, Happy Easter Weekend to you both,
xo Kathysue

Lovely tour. DId you get to see San Francisco or Parlange plantation? Our daughter was down there this week visiting.

As a native of Louisiana, I am so glad you are visiting! I hope you continued a bit further up the River Road to Laura Plantation. A very unique Creole plantation. Enjoy!

We love it! -- Staff of Oak Alley Foundation

Great pictures Delores! I went there several years ago and had forgotten how pretty it is!

I was born and raised in Louisiana, too. Nottoway just down the road from Oak Alley was always my favorite to visit - I believe it was the second largest plantation home ever (the first burned)at 53,000 sq ft! Well, they needed the space as they had 11 children :) However, since I was last there years ago, they have apparently turned it into a highly commercialized wedding/convention venue, which makes me terribly sad. Once upon a time, you could stay overnight in the bedrooms in the house, wander around on your own in the quiet, empty house at night and imagine you lived there in the 1800's - it was amazing!