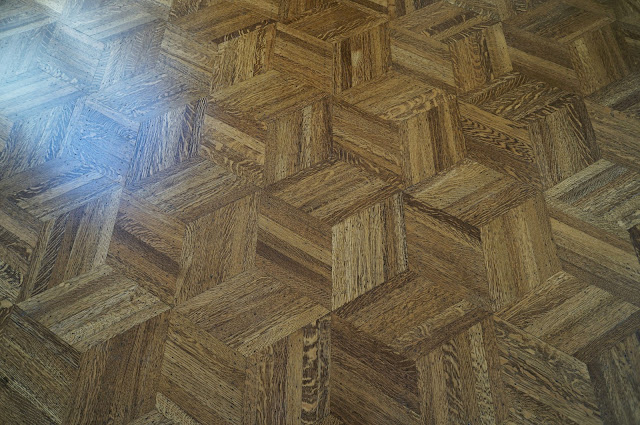 This is the parquet floor that was original to the house, circa 1935.
It was in the entry, the living room and the dining room. 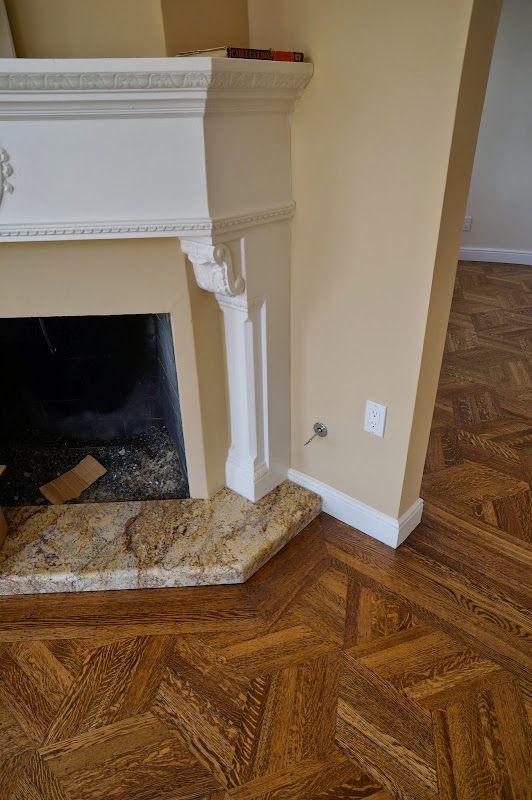 I can't imagine how this floor was installed 80 years ago because to duplicate it today would be crazy ridiculous, both price-wise and labor-wise. 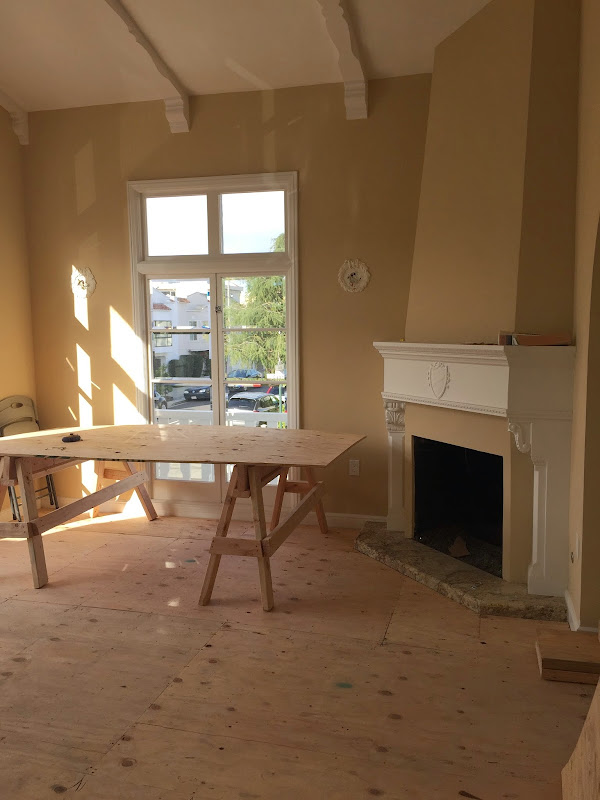 I planned on keeping the floors, but ended up covering them up with plywood to further strengthen the house in the event of an earthquake.
My contractors highly recommended it and assured me that we would make the new floors even better than the old ones. 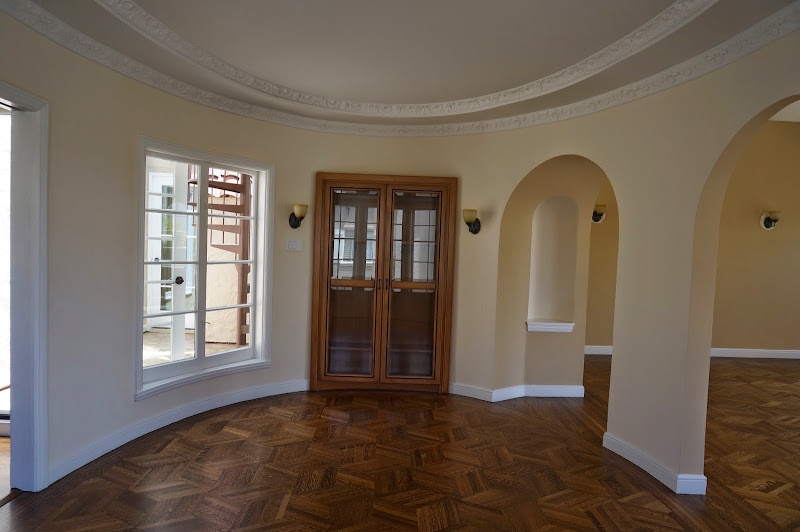 I have been pretty skeptical of that all along!
Really?
Better than those gorgeous parquet floors in the oval dining room?   I mean, how would we make the new floors awesome in here? 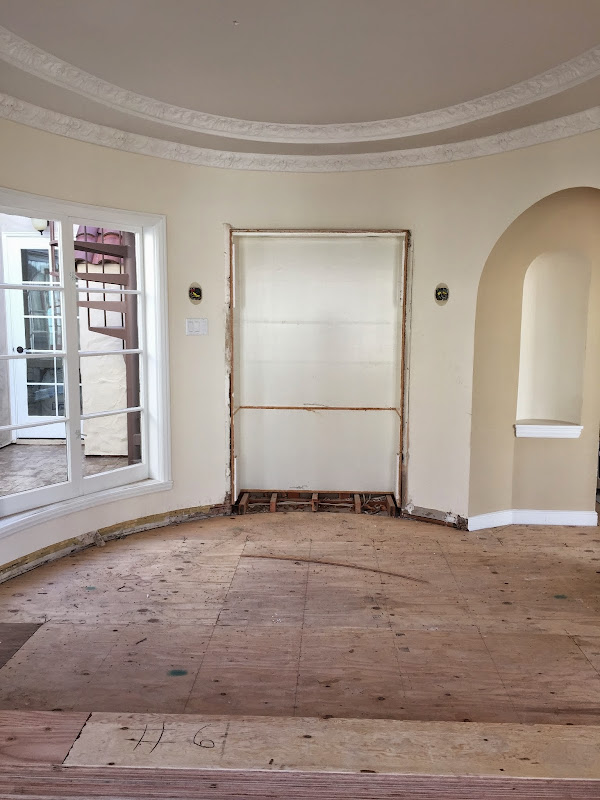 Herringbone was the answer, but only in the dining room.
It would be too expensive to put it in the living room and entry too.
But then we found herringbone floor that is already pre-cut, making the installation almost easy! 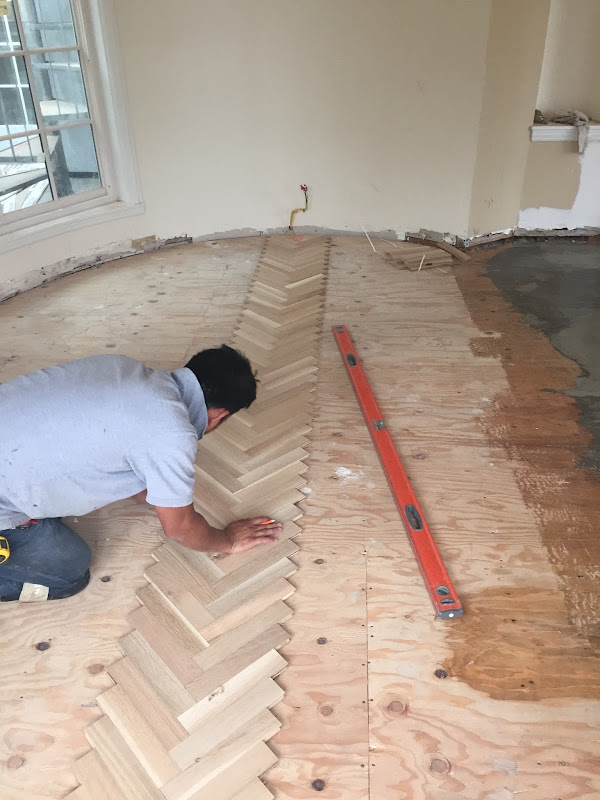 We compromised in the dining room and eliminated a border... 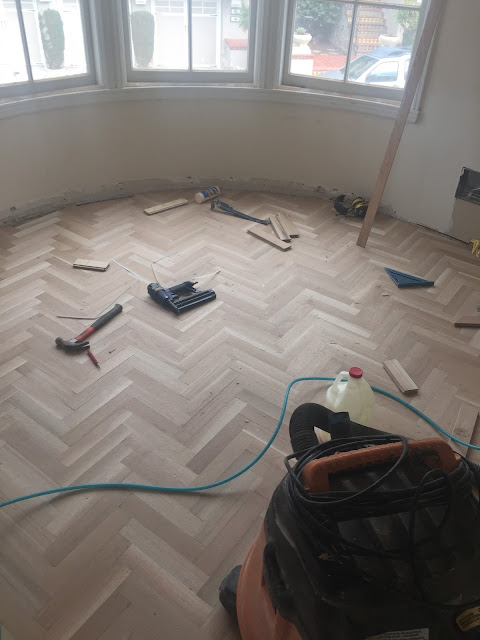 ...and just installed herringbone right up to the walls. 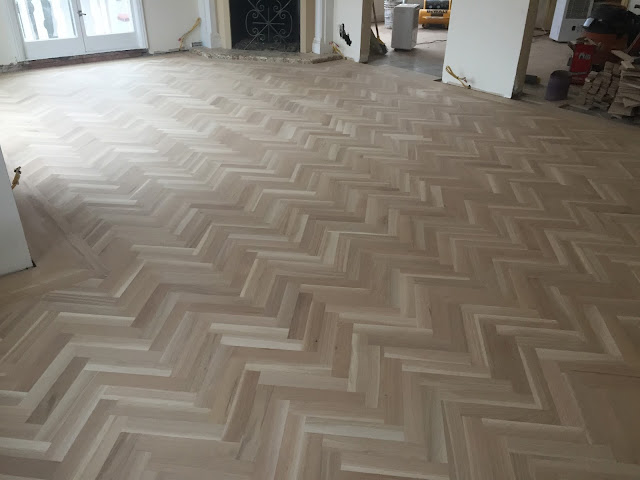 The living room got a border though... 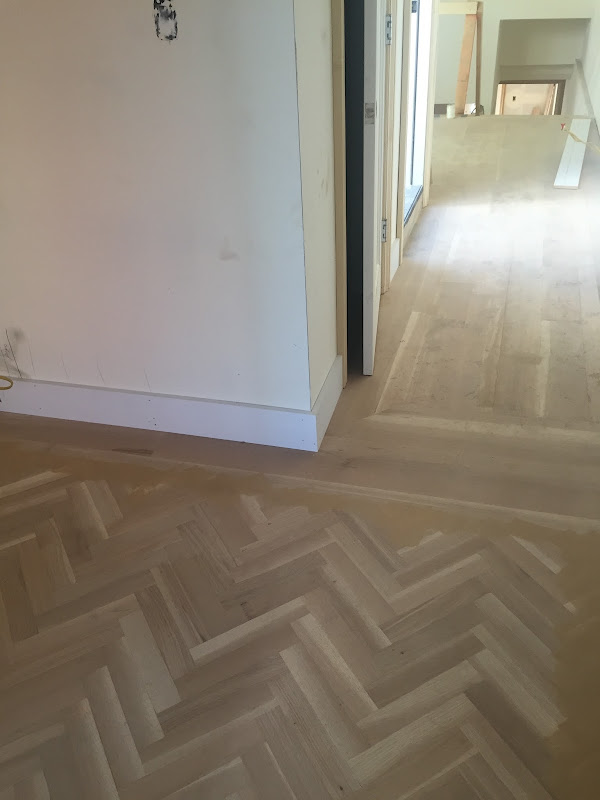 ...as did the entry.
For the rest of the house, we used random plank boards in 5 inch widths. 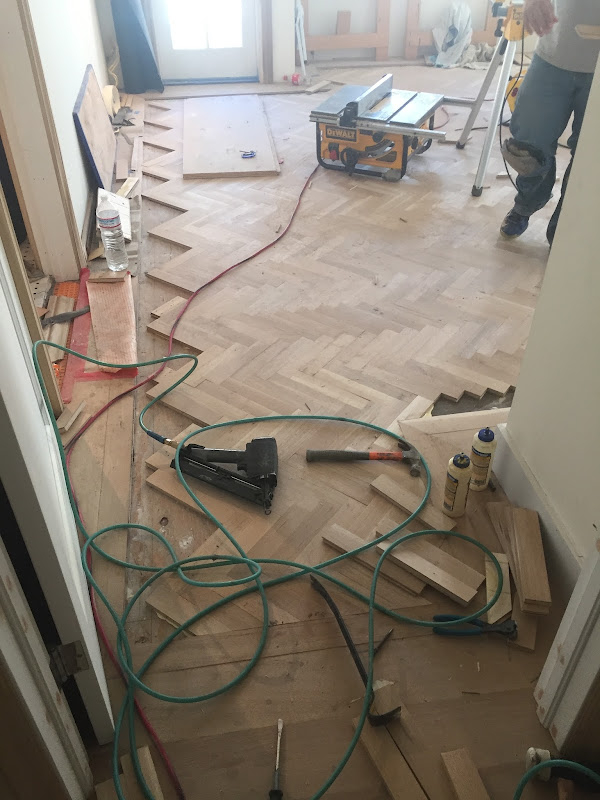 That is until we discovered that we had just enough herringbone left over to do the master bedroom!
Decisions, decisions... 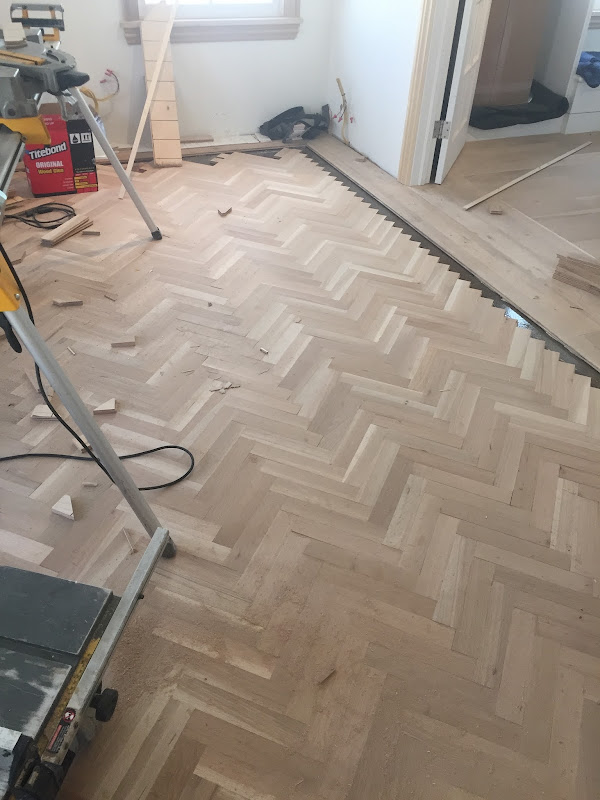 At first I was uncertain if herringbone should even be in the master, but then I realized that the leftover was like a gift.  I never would have considered herringbone for the master considering we were only going to do it in the dining room at first.
Now that the floors have been installed, they will be sanded and two coats of stain will be applied.
Then they will be covered up until the whole house is painted inside.
The final coat will be applied just before we move in.
Now all I have to do is decide on the color!

GORGEOUS, GORGEOUS, GORGEOUS WOW!! YOU are almost there!!! So happy and excited for you. We got our keys on my birthday and we have started taking things over to the new house. Lots to do and think about and ALL GOOD!! Aren't we lucky ladies to be able to do this at our age!!! New sure is fun and challenging in a good way. Come by my blog to check out my new home when you have a chance!
xo Kathysue

Wow, those are gorgeous, and I can just imagine how wonderful they will look finished!! How exciting!

Oh, your floors are gorgeous. The originals were beautiful too! So much work, I can't imagine! Your new home is going to be so gorgeous.
Be a sweetie,
Shelia ;)

This is beautiful! I have always admired herringbone flooring.
I can hardly wait to see the finished product - same for you I'm sure :)
Darlene
www.BundleMeBaby.etsy.com

Lovely lovely. Some many decisions and great choices! Cannot wait til you are settled.

Go for it. Why not. You will probably throw down a rug as well so you will only see part of it right? Like you said it is a bonus.
Looking forward to the finished project.

Hi Delores,
OMG, Gorgeous, Gorgeous, Gorgeous. WOW. I am insanely jealous, and even though I love our floors (random width natural hickory) I would trade them in an instant for yours!
Keep up the awesome design work, you are almost there. My goodness you are going to have a beautiful home!!
xo
Heidi

Excited for you that things are moving right along. Gorgeous wood floors.

Sharon
The House of Hampton

The floors are already gorgeous! I am so excited to see it all when finished!
And how nice to get a "gift" for the bedroom!
Shelley

Oh they are lovely! I can't wait to see the finished work!

Delores, Your house is coming along so beautifully and I'm enjoying watching your decision making! Now for the hardest part in my mind--choosing the stain color. I can't wait to see what you decide! Linda

They are amazing..cant wait to see them stained!

Oh, I love the herringbone Delores! I can't believe how gorgeous they look. And I LOVE that you are keeping the integrity of the style of the original, so few people actually do that. Hopefully you will be better than I was at picking floor stain! When we refinished our hardwoods I hemmed and hawed and finally chose one, only to walk in when it was all done and think I should have gone darker - ugh! I am sooo like you with the "Analysis Paralysis" - it takes me forever to decide and then I still seem to second guess myself afterwards!

Your house is really looking gorgeous, can not wait to see it finished!!

...beautiful...and...I love how the original floors told you what to do... houses do speak to us...if only we will listen...blessings laney