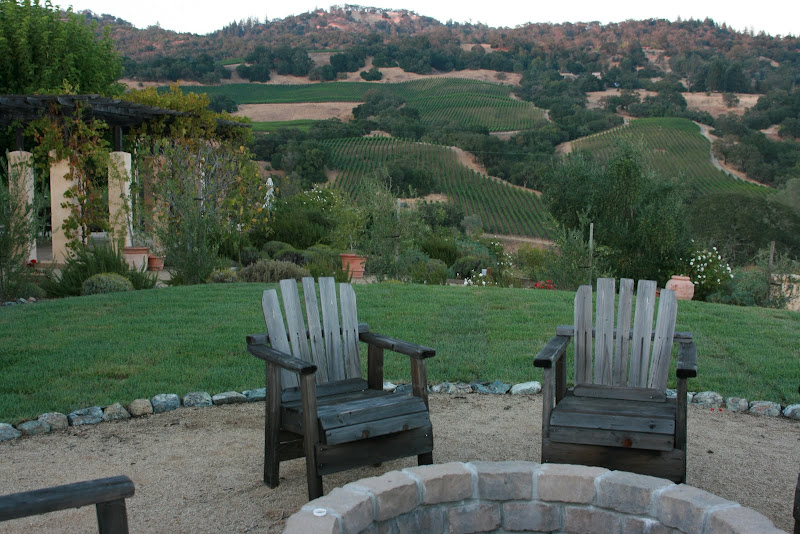 We are loving our new lawn surrounding the fire pit in Asti!
My latest landscape project is what I should have done to begin with back in January '09
When I first started blogging in November of '09, I wrote a post about how I landscaped this area above. You can read it here. Originally, this was an abandoned septic mound which I decided to build a fire pit in the middle and surround the outside area with French lavender. About 200 plants. 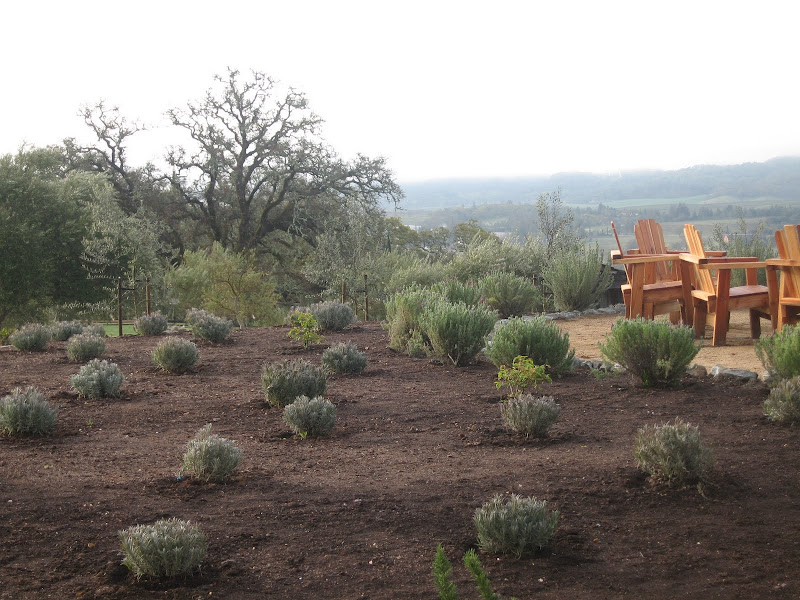 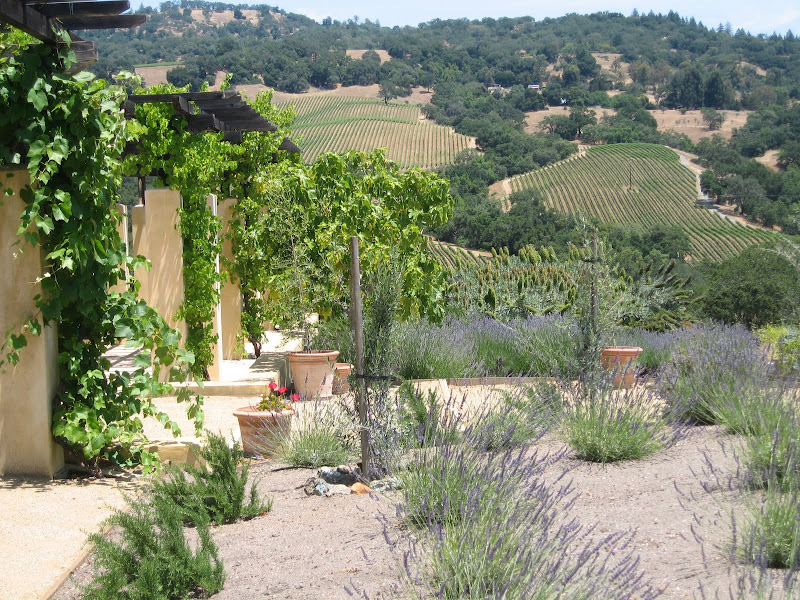 Here is what it looked like in June '09 when the new lavender bloomed. I was so excited about the lavender! We even harvested it and made sachets for Christmas gifts. The problem began when half of them died because of two reasons: too much water and the soil was too rich. 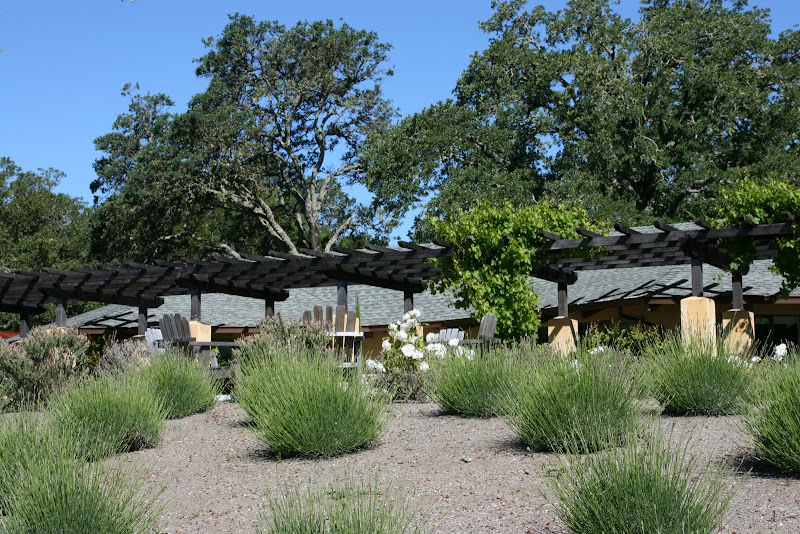 So I replaced the dead ones and began "chasing" the lavender....The new ones would never catch up in size with the older ones, and meanwhile I was still losing lavender plants! 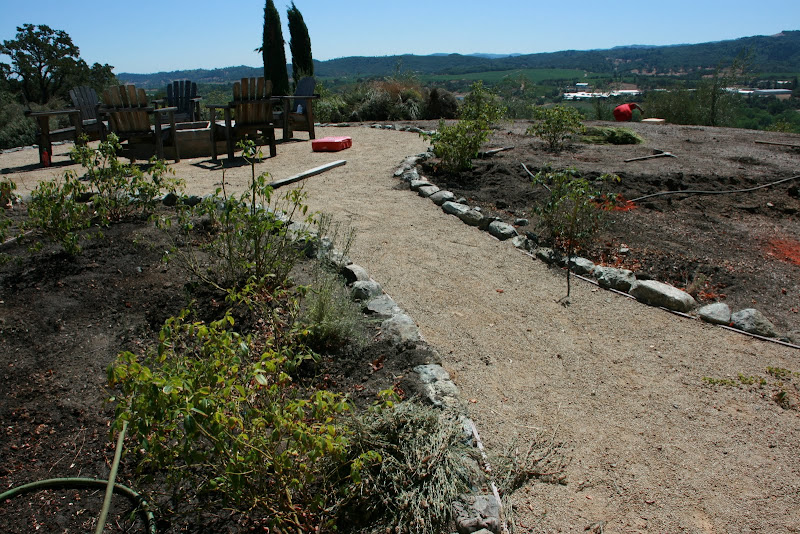 Last week I pulled up all the lavender. It was a tough decision, but the right one. 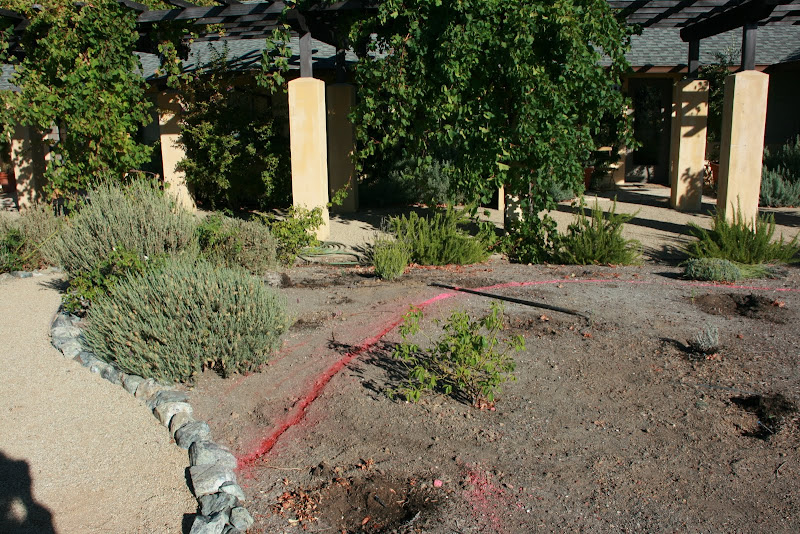 I had a can of spray paint and drew out where the bender board would go separating the grass from the border of olive trees, roses, rosemary and what was left of the lavender. 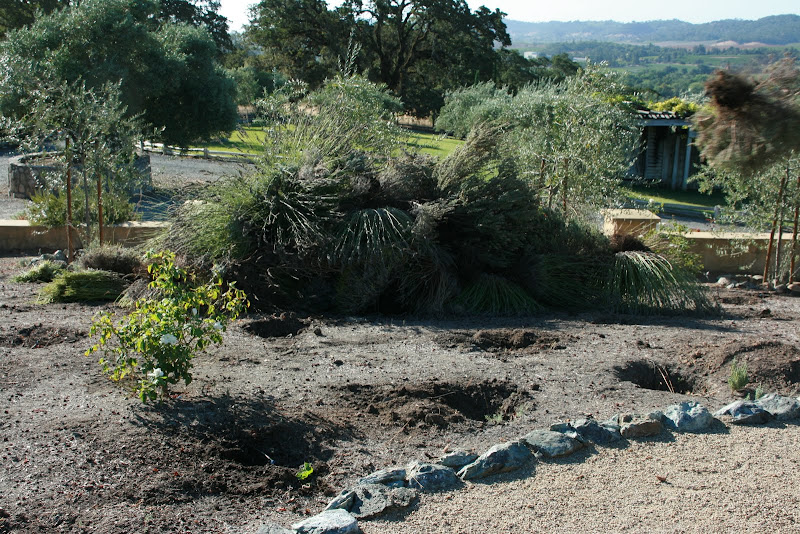 I felt kind of bad pulling up the lavender, but they were going to die anyway. 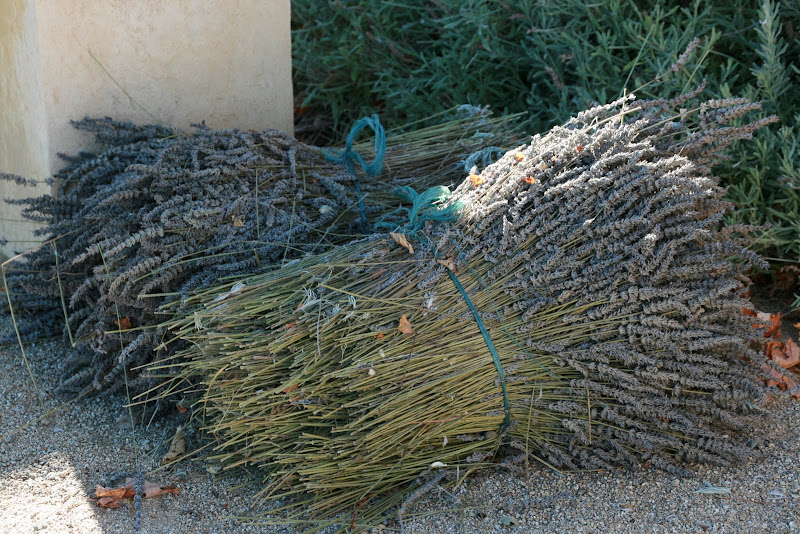 We did manage to save some for more sachets though. 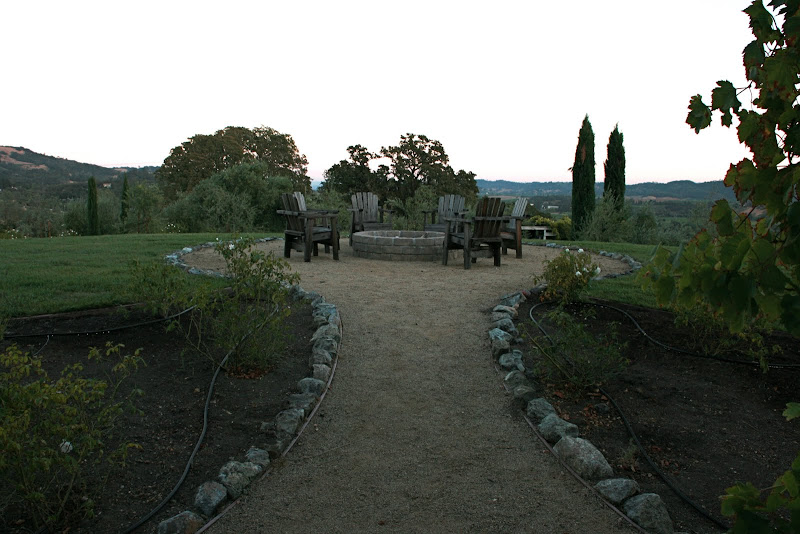 The final result! What a difference the new grass makes. No longer arid, but green and cool. 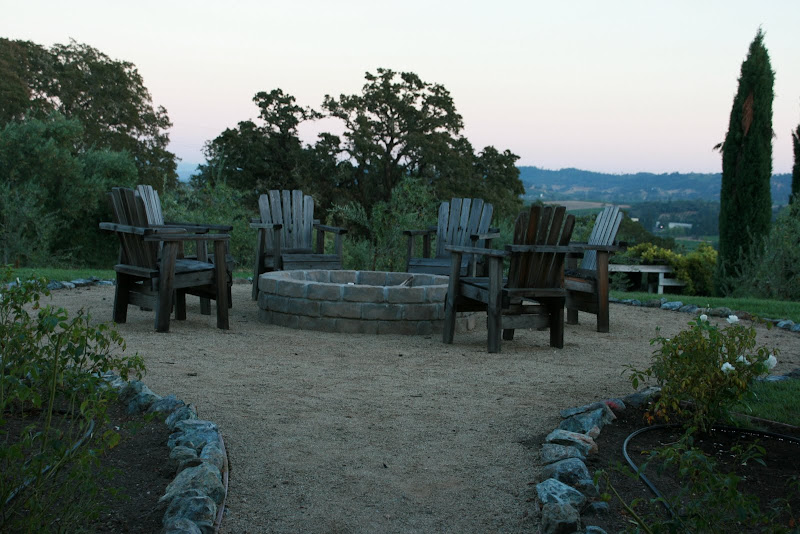 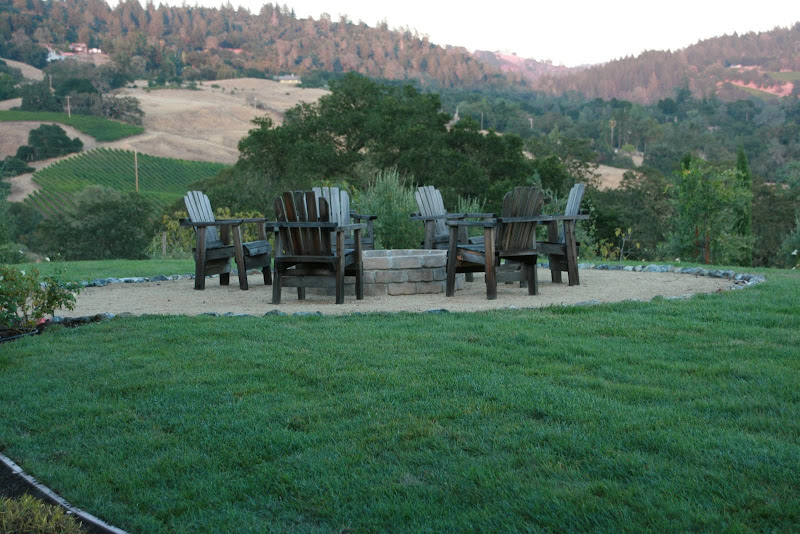 Our granddaughters can run and play here now. Before, there were so many bees on the lavender that it wasn't safe.
We can also lay on the grass and night and watch for shooting stars! 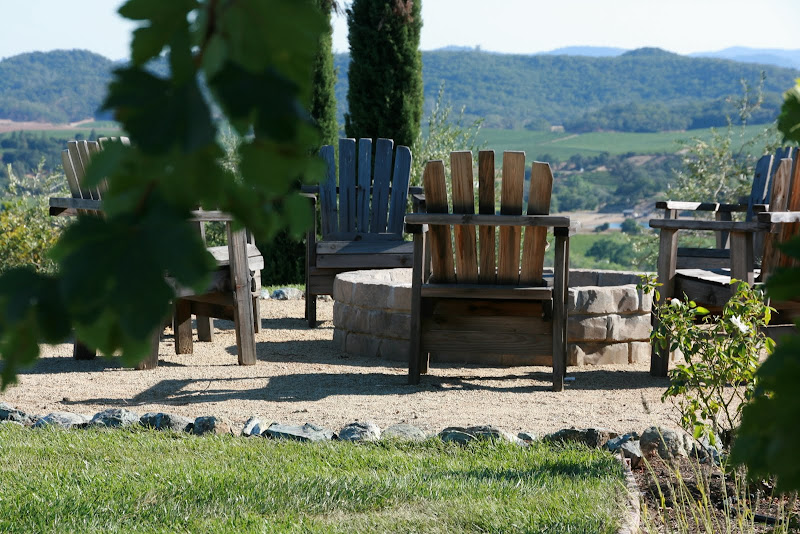 Or sit in the chairs in the morning and have our coffee without fear of getting stung. 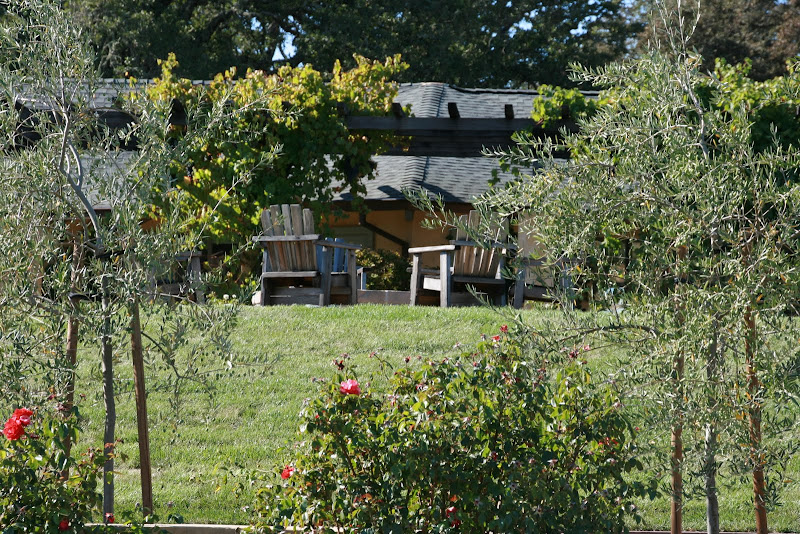 I think adding the grass was the best improvement to our property. It gives the house a homey feel too. 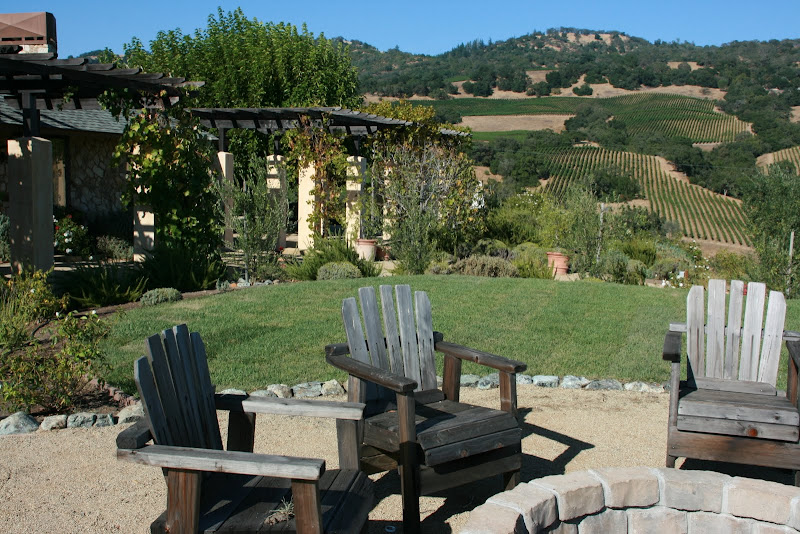 This was a huge project, but well worth the time and money to get it right.
I just wish I had gotten it right in the beginning, but that is how gardening is. Trial and error! 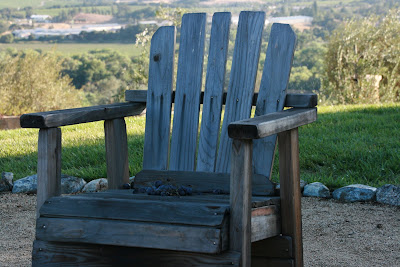 I'm joining Susan at A Southern Daydreamer for Outdoor Wednesday.
Be sure to visit and see some outside inspiration there.

Posted by vignette design at 6:37 PM

What a fabulous view! You have an artists eye for sure. Thanks for sharing.

Beautiful, Delores! I loved growing lavender, but the grass looks so much better with the hills behind.
What a wonderful place for a firepit!

Now that is a beautiful view. I would enjoy my coffee looking at the wonderful landscape too. sandi

Oh my word, how gorgeous! The grass does look nice!! How wonderful that you have that space!
Suzanne

This is my first time visiting your blog and all I can say is, "Wow!". Love your yard! Can I move in?;-) What I would give to have a view like that.:-)

Delores-That is absolutely beautiful. I love the grass! And..as much as I love lavender I think the grass is a much better option for optimal family use...Nothing like sitting around with your coffee in the morning and feeling cool grass on your feet. Love it- Diana

Oh my - what a wonderful spot. It looks so lush and relaxing.

It looks beautiful! Very peaceful and relaxing. I could sit there with a good book all day or cozy up by the fire pit at night with a cup of hot tea. We have quite a bit of lavender and I know what you mean about the bees. Your lawn was the perfect choice. Beautiful job, Delores!

Yes, it is trial and error. The grass looks great. The grands will like that much better.

Good point Delores it really is trial and error but I think you realllly got it right this time. I can only imagine how wonderful the lavendar bunches smell, yum!!! It all looks so picturesque what a fun place to sit and watch the fire and the shooting stars, Love your lifestyle, Kathysue

So you've been blogging for about as long as I've done it...
Too bad the lavender didn't make it but you are right for such a close distance to the fire pit grass is the best alternative! Looks very well tended this way.

Delores I think you were very smart to try something new when your original plan didn't work out the way you hoped! The new grass looks amazing, and I'm sure you will enjoy it even though your beloved lavender is gone!

Oh, that lavender is so beautiful, but the green color of the grass is so inviting! It makes you want to go sit in that cozy spot looking out over the hills! How beautiful and yes, worth the effort! Three Pixie Lane

Oh Delores,
I that looks great! I knew I'd get some good advice following your blog. We also have some trouble areas in our yard, mostly because of the deer. That was smart adding the grass for a feeling of cool green. I was going to add more lavender but may rethink this now. Thanks! Debbie

What a HUGE difference. That first picture just had me mesmerized, I couldn't stop looking at it...I might have to use that as my screen saver, I am blown away by your photography. I have many lavender plants but have never harvested them, they are almost gone now but next year I might just get your help in figuring out how to do that. We live in the NW and very near Sequim, WA where there are huge lavender fields and a Lavender Festival, so I am lucky in that regard that it doesn't take a green thumb to grow them.

I lost five lavender plants this year and it broke my heart. So I am sad your lavender did not make it. However the lush green grass looks really wonderful! I'll bet it feels really good on bare feet. :)

Oh, what a lovely spot and what a delightful thought to lay on the grass at night and watch the shooting stars.
~ Sarah

Dayle ~ A Collection of Days said...

I can relate to the trial and error part of gardening, although I'd never be able to tackle such an outdoor project as you've done here. Oh, to be so talented. It's beautiful!

So beautiful, Delores. What a great place to relax and enjoy your gorgeous view.
hugs, Sherry

and how bout the feeling in your bare tootsties?

LOVE the change ,,,
you just can't sit still can ya?
kind'a like someone else I know

Such a beautiful job. I was sad to see the lavender go, but it certainly sounds like it was the right thing in the end.

Oh my...this is beyond beautiful. Looks like somewhere in a movie..:)

Lavender...*sigh ..but the grass is beautiful and now you can enjoy this magnificent spot.
xo bj

Who doesn't like lavendar but the grass is so much softer and will bring musc more family pleasure. Well done! hugs♥olive

What a breathtaking view from your yard! I love your home inside and out and love your decorating style. Please stop by for a visit sometime.

Delores, your firepit area looks like the perfect spot to enjoy that fabulous view you have there!

I love lavender as well, but it doesn't like too much water...that's for sure. It's too bad you couldn't have moved the plants that were still alive. I love a green lawn as well...it cools and calms you in the summer heat. You are very right...gardening is totally trial and error and a little good luck thrown in for good measure!

Although I love lavender, this is so much better for you and the family. Love the fire pit, and the chairs are perfect.

Oh Delores, I can imagine how difficult it was to make the decision to pull up the lavender, but this did turn out so pretty and probably much more useful. (It looks like a wonderful spot to lay ont he grass to look at the stars). laurie

That looks like something that should be in French Architectural Digest! What a view! We are getting ready to do a major landscape project and I am scared to death because we are cutting down a huge magnolia tree. It's a decision that has taken me a year to come too and I am pretty sure I made the right one but still nervous. :)

I so love what you did here!!! Extraordinary and the surroundings are outstnading!!!!

It's funny that, when I came to visit, this evening, the first thing I did was to reread your profile blip. I haven't read it for a long time and that is when I noticed that you're interested in landscape design. Tom and I are interested but, hopelessly lacking in knowledge or understanding. There are certain things, here, that seem obvious - like it's just supposed to be but so much is a conundrum. Respect to you and your skill and your ideas. This is a very interesting post - the whole process and the ideas and the lessons learned. The lavender did sound brilliant but the "pros" for the grass is heartwarming! Congratulations on figuring it out and getting it done!