Murphy's New Yard: Behind the Scenes, Before and During Construction 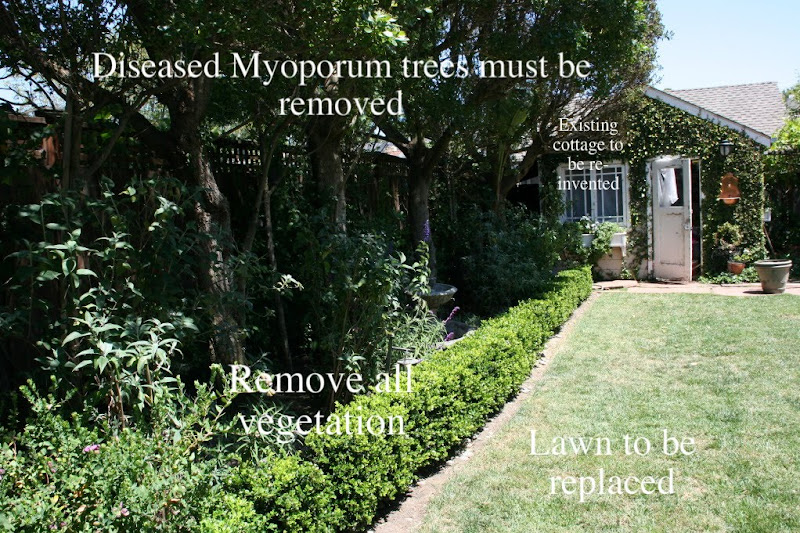 The Plan.
Two months ago when we tackled this project, the first issue to address were the diseased Myoporum. They had a thrift and even after spraying, it was clear that they were dying. I suggested Pittosporum in their place. They're evergreen and grow fast.
So out they came, along with the plants underneath. The lawn was also removed. 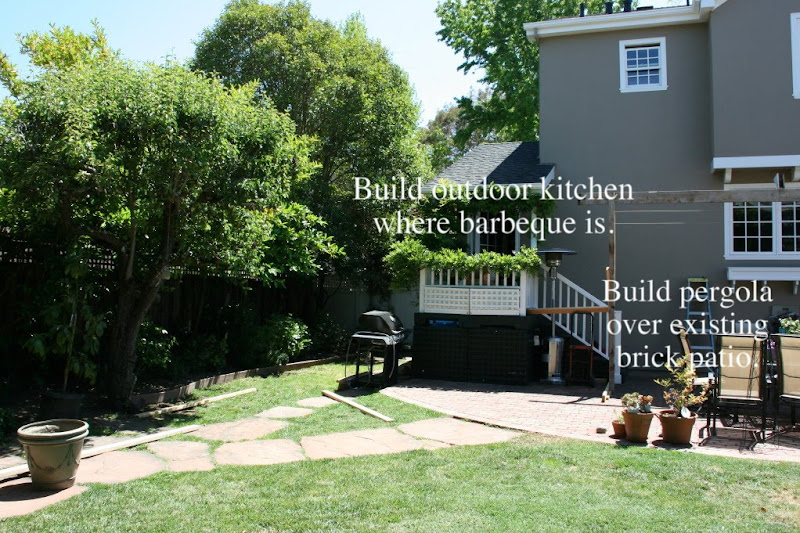 We decided on an outdoor kitchen, wrapping around the existing brick patio where the portable one is sitting. We also came up with the size and dimension for the pergola.
All the stepping stones were removed and a portion of the left porch would come out.

The plan included a spa, tucked behind the barbeque.
I was also pushing for a fireplace.
A lot of brainstorming, head scratching and trial and error went into the first days of construction. 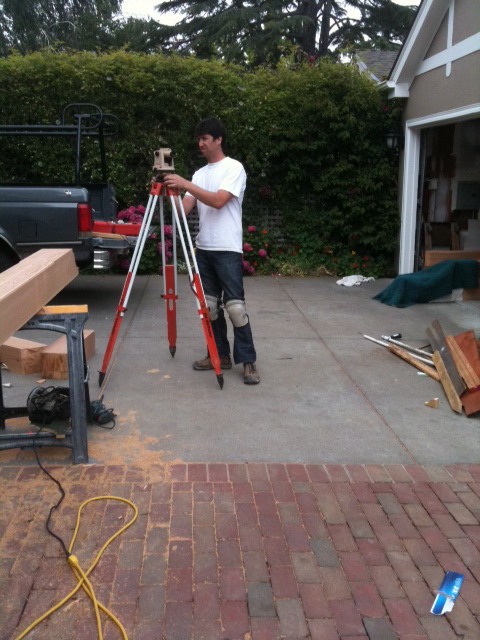 Construction Phase.
After the initial demo, construction began on the pergola and kitchen. 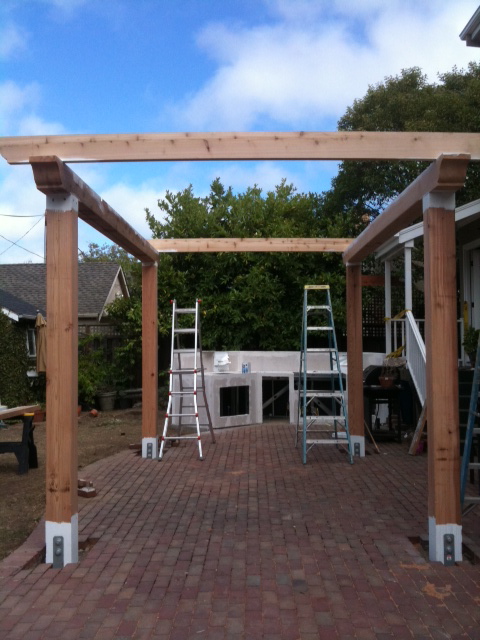 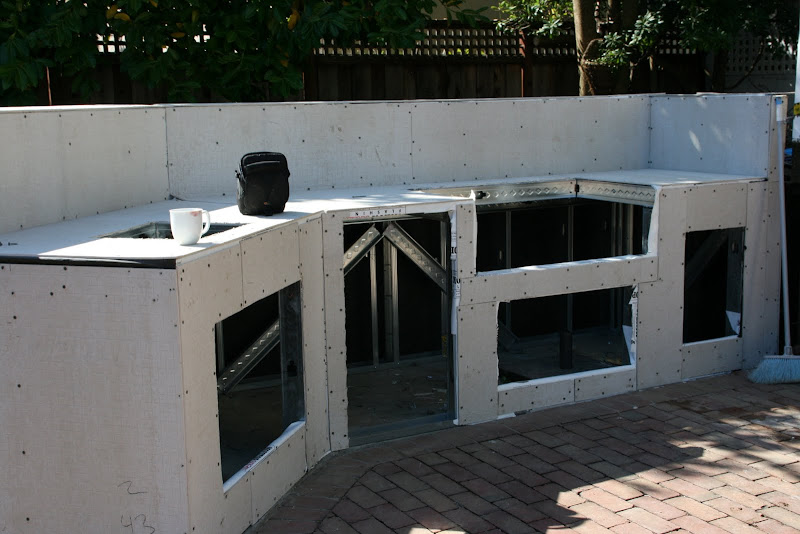 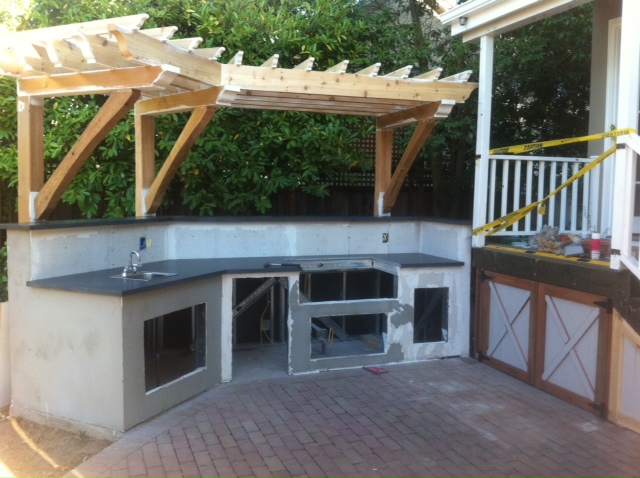 About 3 feet of the porch was moved, making way for the kitchen.
Ward built an arbor over, mimicking the pergola.
Maureen and I went shopping for granite! 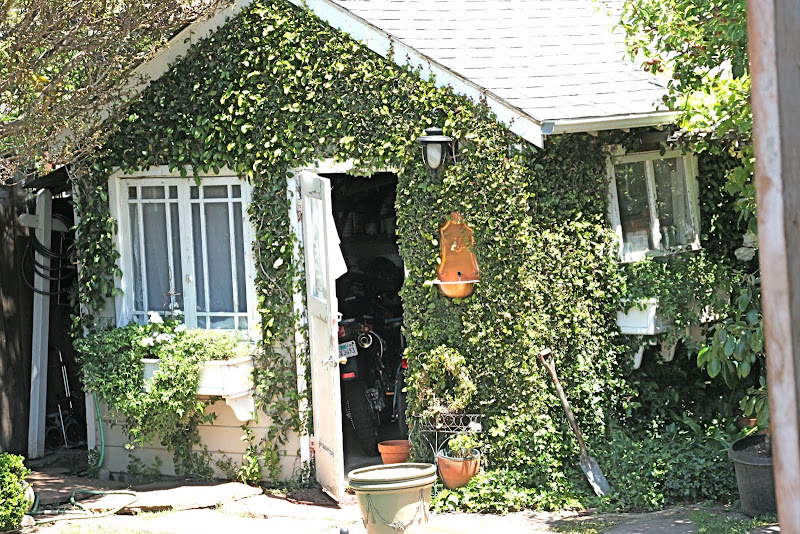 It was now time to address the cottage. We talked about making it a chicken coop with a sitting room.
I suggested replacing the door with new double French doors and creating a cottage retreat. 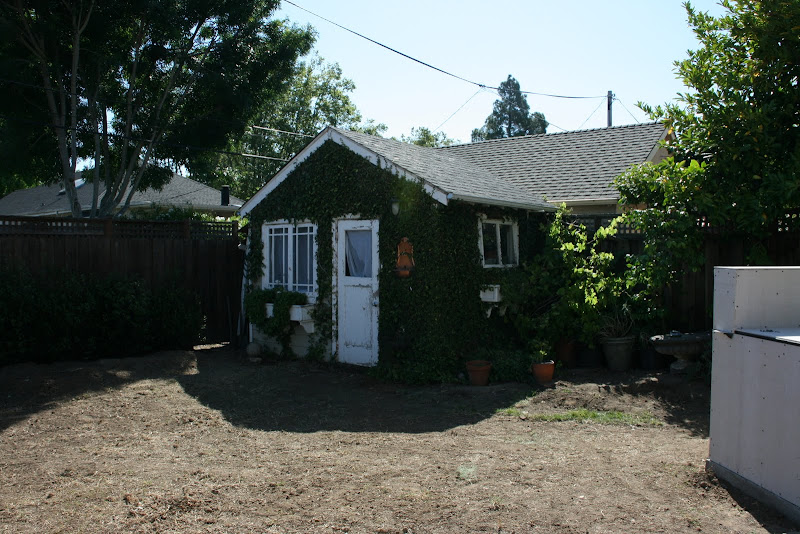 So, out came all the paint cans, tools and motorcycles! 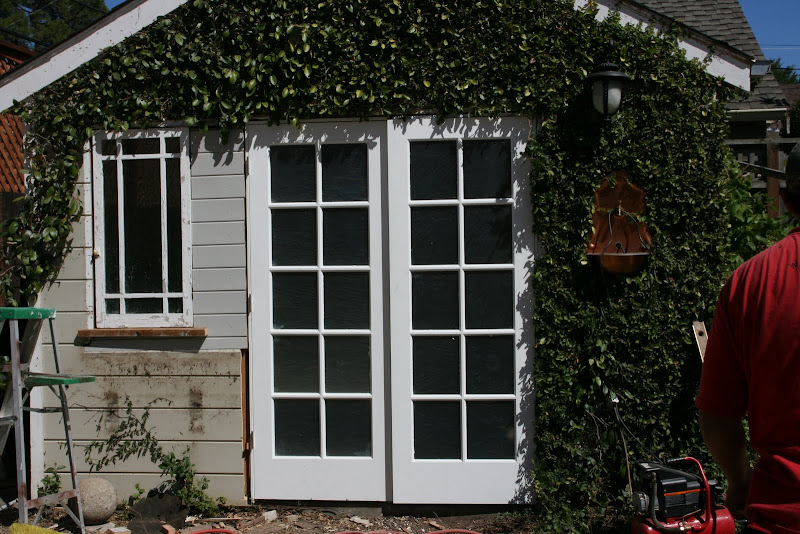 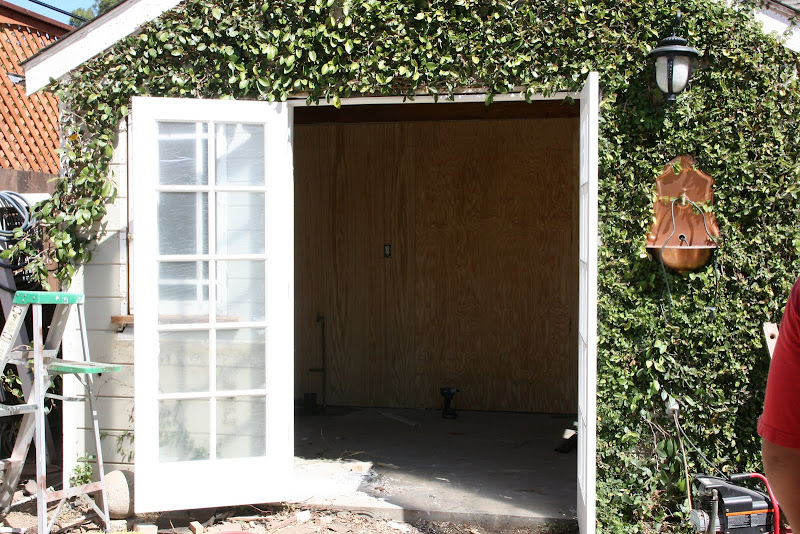 The new bead board will be painted white, the cement floor will be gray. 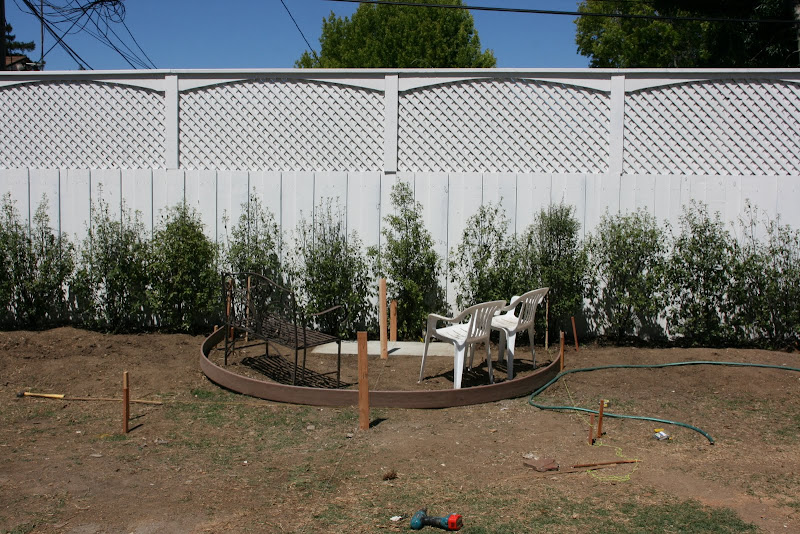 A trellis was added to the top of the fence for privacy.
Meanwhile, the design for the fireplace proved to be challenging.
Originally, it would be a half moon brick area, large enough for two chairs. 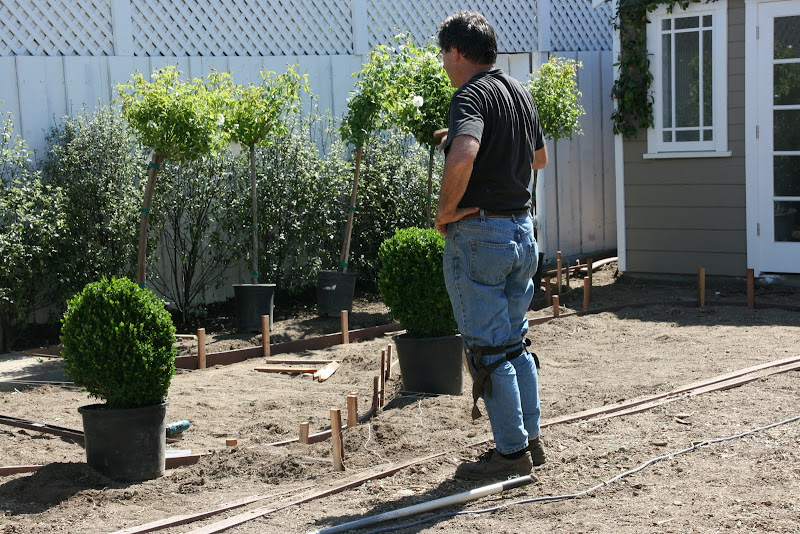 I came up with the idea of a gravel path that would wrap around the grass, connecting the fireplace to the cottage, the main patio and also behind where the spa is, ending at the gate.
Laying out the border was a huge challenge. I think we tried three times and eventually got it right. 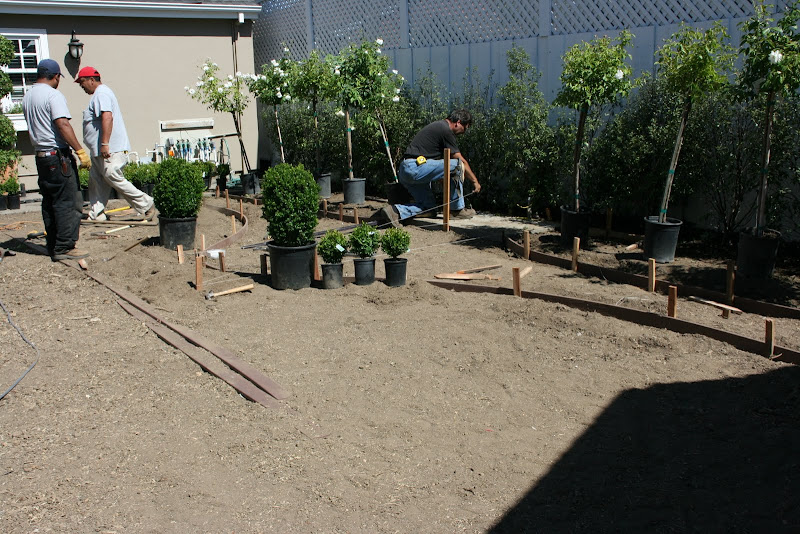 Laying out the border was a huge challenge. I think we tried three times and eventually got it right. 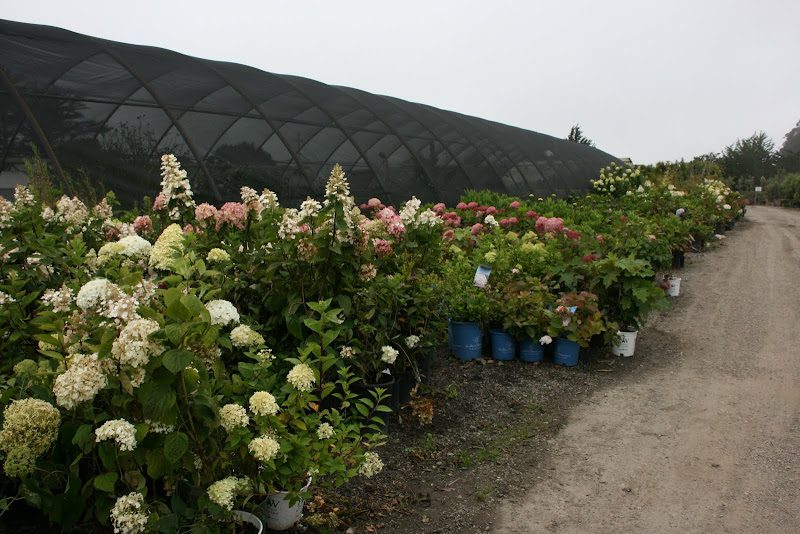 After the gravel went in, Maureen, Martin and I went shopping for plants at Pacific Nursery, a wholesale nursery in South San Francisco.
We bought three birch trees, four Japanese maples, lots of hydrangeas and azaleas, ferns, Mexican sage, and I don't know how many little boxwoods! Roses were previously ordered. 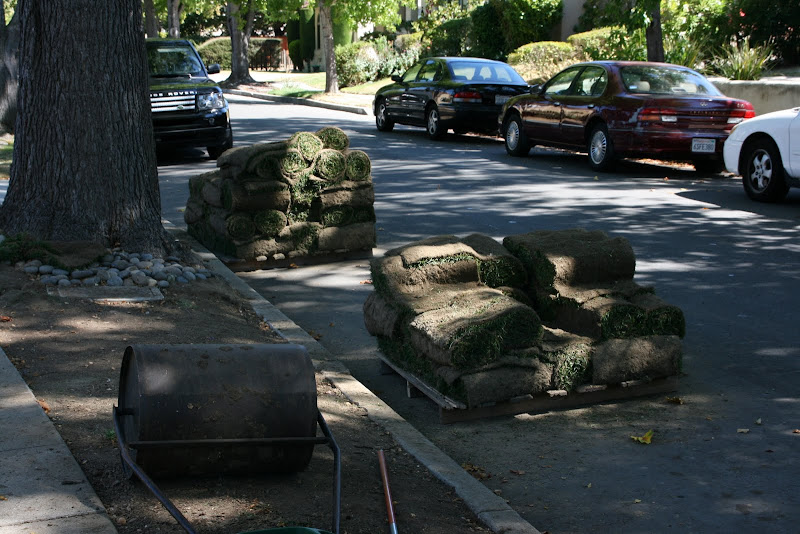 Ahhh, the homestretch!
When the grass gets installed, it is such a good feeling! 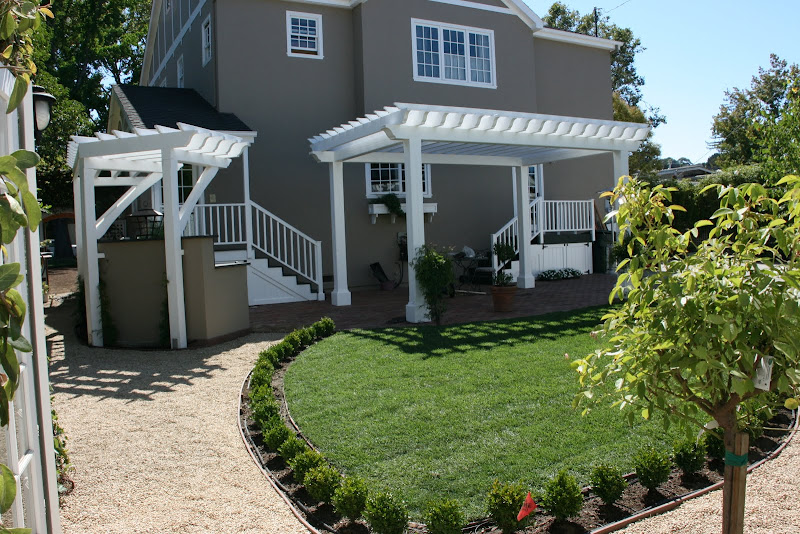 We were all very excited!
The only thing left to do now is finish up the painting, furnish the cottage and prepare for the party!

I enjoy designing gardens almost more than interiors! I have no formal education, just trial and error, and experience.
Here are a few tips, along with tried and true plants that grow in my zone:
*Favorite hardscape materials are brick, gravel and decomposed granite.
*Favorite shade loving plants are hydrangeas, azaleas, camelias, impatients and ferns.
*Favorite sun lovers are roses, Mexican sage, lavender, rosemary, geraniums and other bedding plants.
*Trees that do well in my zone are birch, maple, redwoods, locust and olive trees.
*Boxwoods always dresses up a garden.
*Bark or mulch added to the planting beds finish off the garden!

Posted by vignette design at 10:05 AM

Just fabulous, and I love the cottage!!!

What a fun project. It really turned out beautifully.

I've not tried Mexican sage, but use all the other items you have listed. I'm thrilled to have something new to try.

Beautifully done project! That pergola is perfect and the garden with the refashioned cottage is so inviting. Fabulous!

Definitely no small project. It all looks fantastic, Delores.

What a beautiful project -- I sure need help with our backyard - sigh!

Wow, you can see all of the hard work that went into this project. It was worth it! So beautiful!
Angela and Renee

Not only does it look wonderful Delores, it all looks as though it belongs - congratulations! Specially love the little cottage given a future again~

Delores, it looks beautiful! You are just so smart. Love the Fr. doors on the cottage and all of the plantings. Can't wait to see the cottage furnished. laurie

I am so glad your revealed the finished product in your previous post because this shows all the hard work and major decisions that went into attaining the beautiful results. It looks so natural and beautiful. Gorgeous!!!