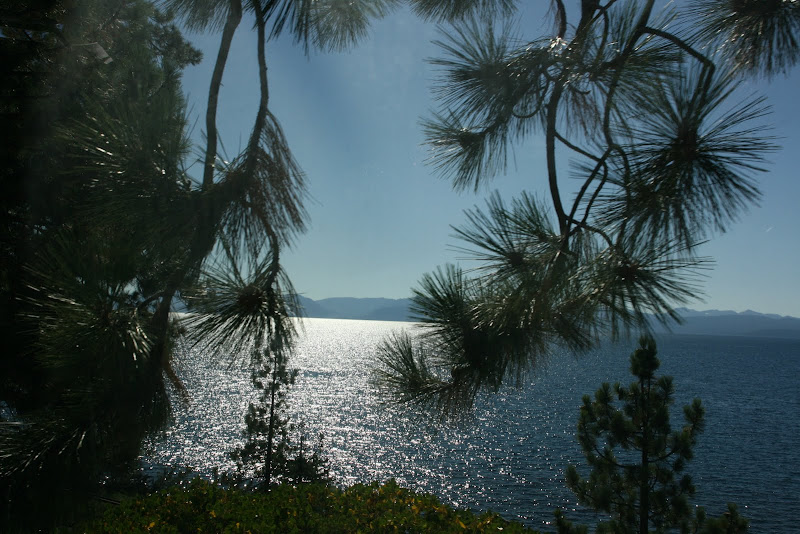 We escaped to gorgeous Lake Tahoe for a few days. It was heavenly!
While there, we toured the famous Thunderbird Lodge. 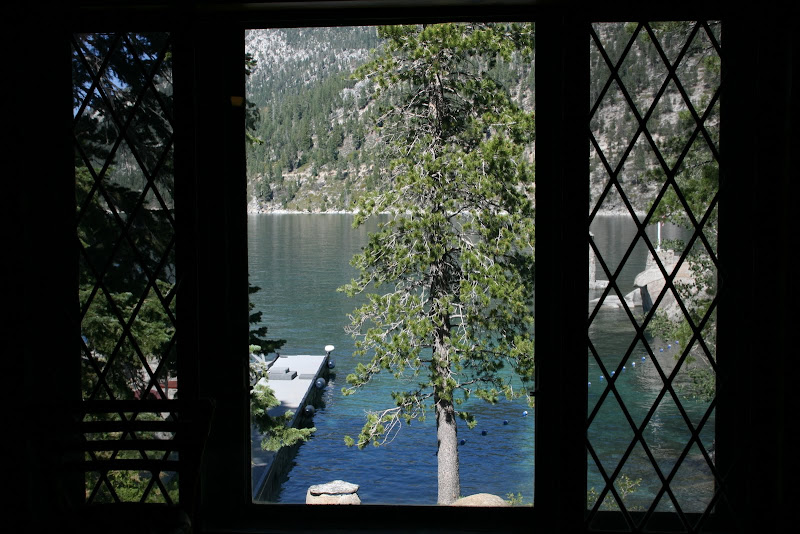 The Thunderbird Lodge pretty much defined "Tahoe Style" for me!
Called The Castle in the Sky, it was built in the 30's by George Whittell, an eccentric millionaire and bon vivant. 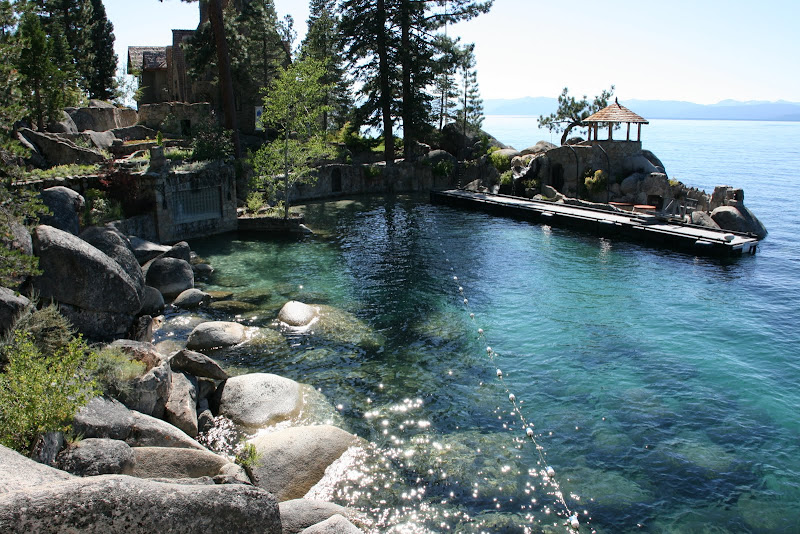 Because of George Whittell, most of the east shore of Tahoe is preserved. He at one time owned 29 miles of the shore from Cal-Neva to Zephyr Cove. Lucky for us, it is undeveloped to this day. 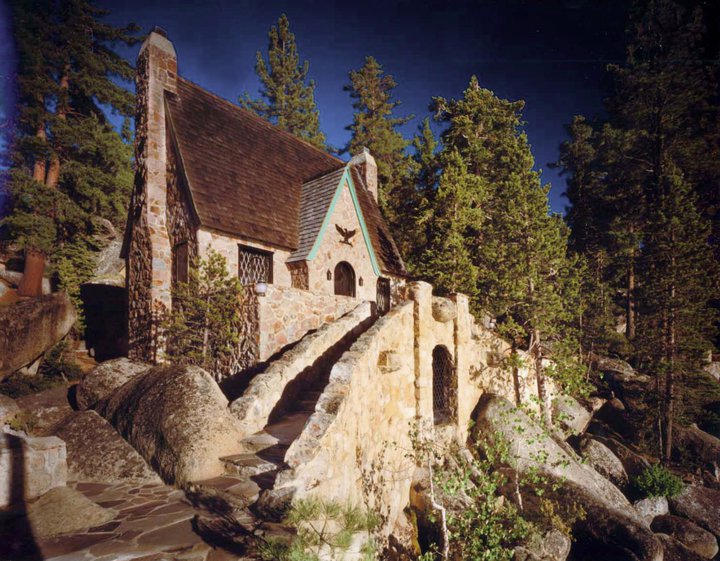 Thunderbird Lodge photo
The lodge is all stone, nestled in the pines and huge boulders that occupy this part of the lake. 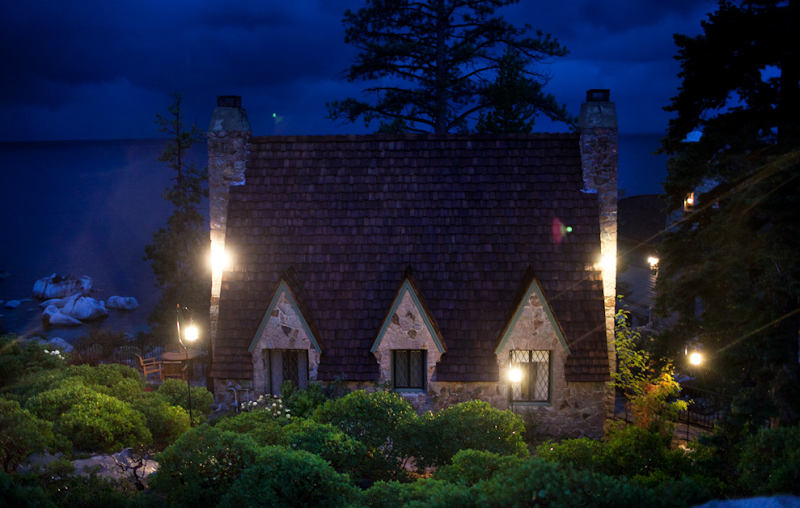 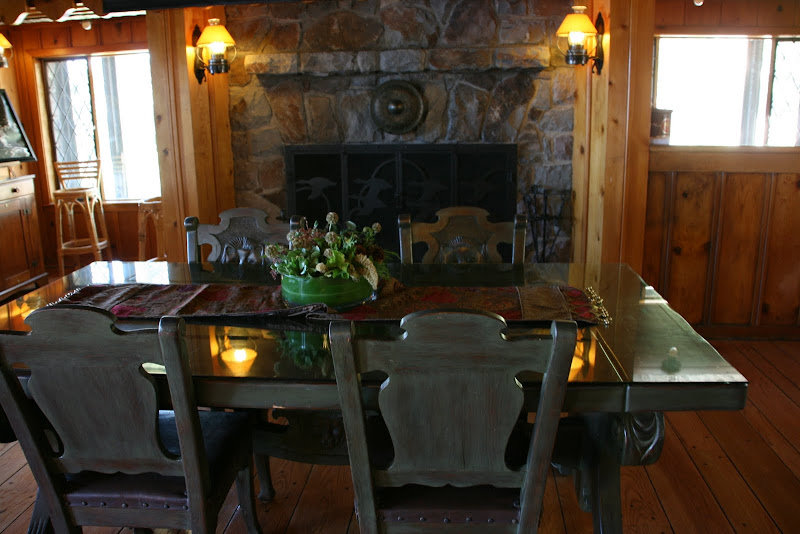 The property consists of several buildings, including the main house pictured here.
I was surprised how small and unassuming it is inside.
A great room with a bedroom upstairs on either end. One for George himself, the other for his mistress! 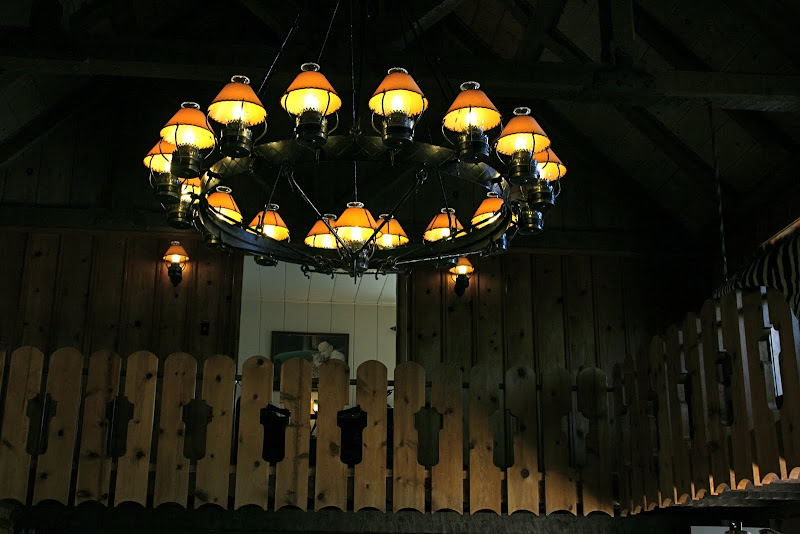 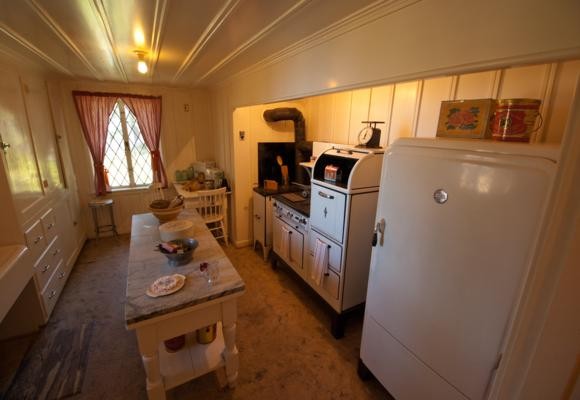 Gadling.com
The kitchen, laundry and maid quarters are in the basement. 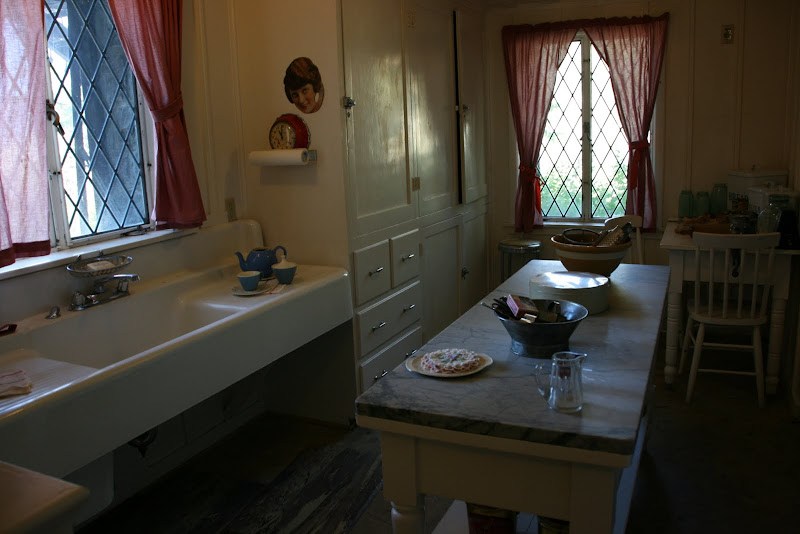 From the basement, we entered a tunnel that was carved out of stone by local miners, 600 feet long. 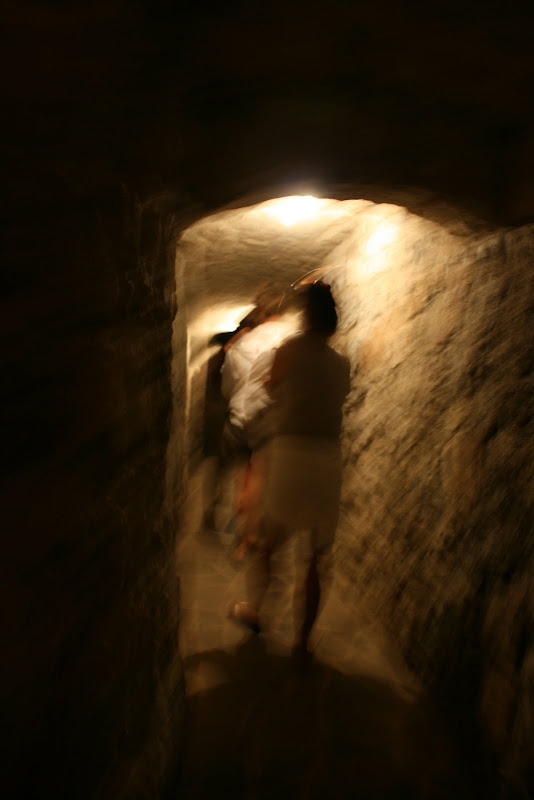 Being claustrophobic, I had a major panic attack and had to go ahead of everyone else to get to the end of the tunnel! That's why the photo is blurry--I was running! 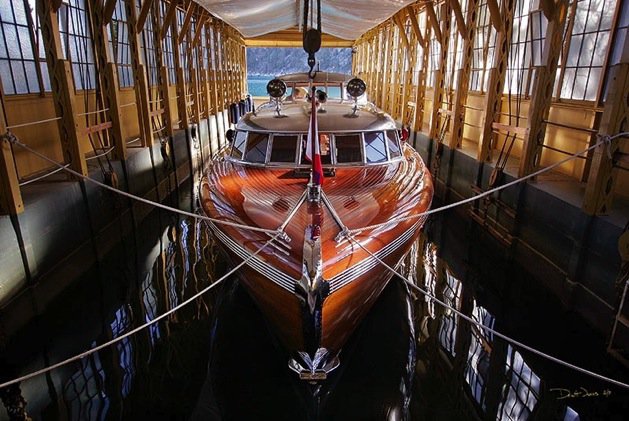 Thunderbird Lodge photo
This was the reward at the end of the tunnel!
The Thunderbird Yacht!
Isn't she a beauty? We were lucky that they decided to take her out for a spin on the lake. 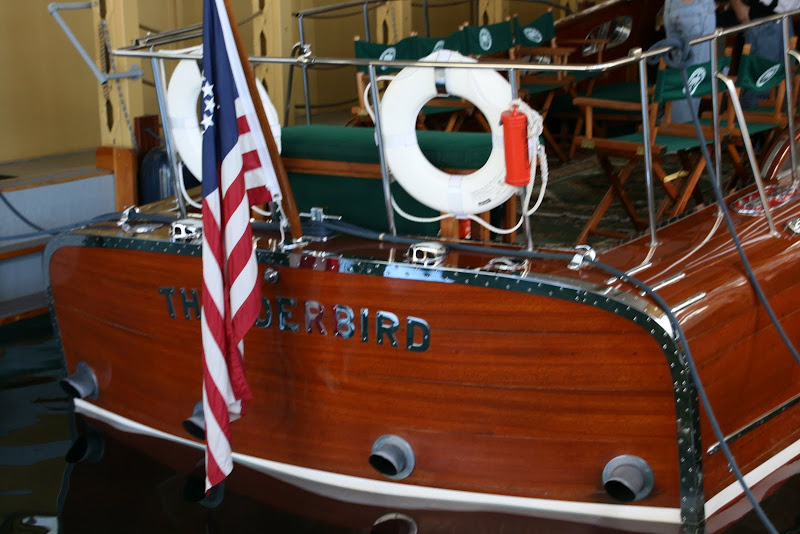 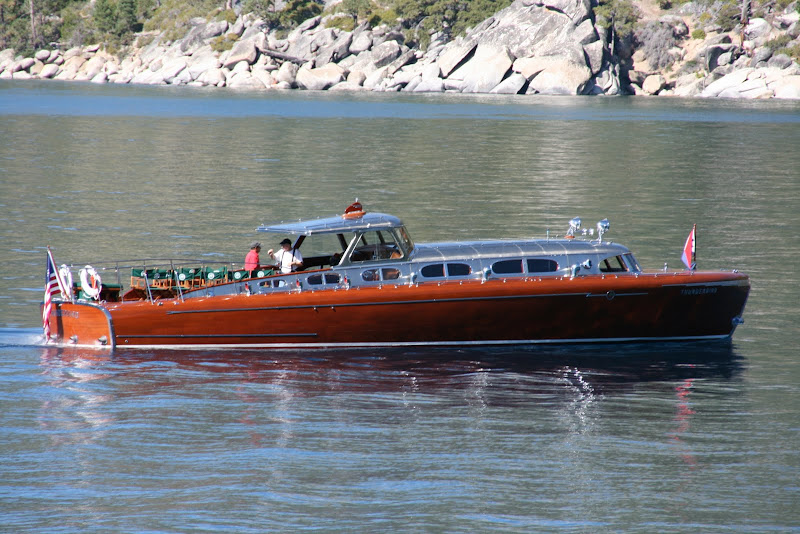 This 55 foot long yacht is probably the finest in the world! 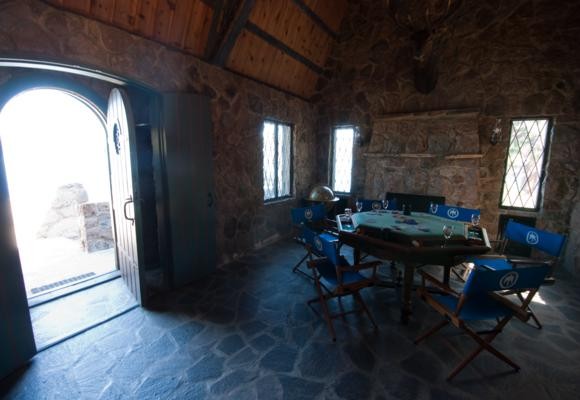 Gadling.com
This is The Card House where Mr. Whittell had many an all night, high stakes poker game with people like Jack Dempsey, Ty Cobb and Howard Hughes. If Michael Corleone was a real person, I suspect he would have gambled here too with George! 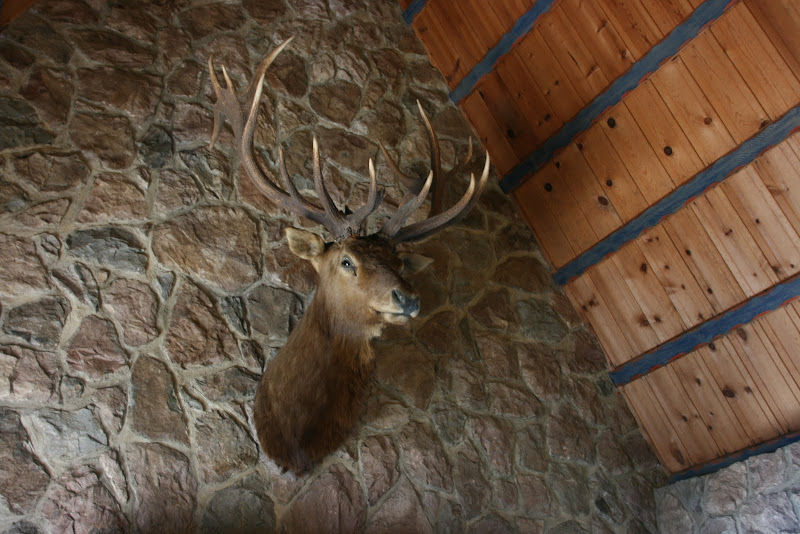 Some people think this property is haunted.
Indeed, we did see a cross on the ground of a closet. A woman felt the presence of a ghost while touring the lodge and threw a cross on the floor. No one has removed it since! 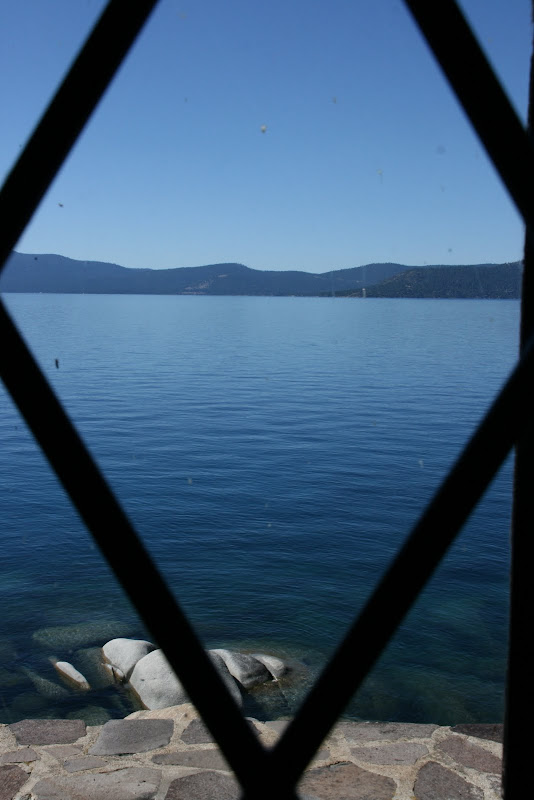 The views from The Thunderbird Lodge are magnificent!
To read more about the lodge, visit the Thunderbird Lodge Historical site here.
There is also a lot about George Whittell, the eccentric man who never worked a day in his life, and was known to tour about town with his pet lion, written here.

Posted by vignette design at 3:00 PM

Oh my goodness...these are such gorgeous pictures! I have never been to Lake Tahoe, but it is now on my list of must-visit places!

Wow! What beauty! I love how the lodge seemingly hugs the bluff! Stunning! Thanks for sharing. Hugs!

What a gem!! Last time I was in Lake Tahoe, was when I was a young teenager...I am due back! So funny when I saw the tunnel before I saw the caption below I was like nooooo way could I go down there, I am VERY VERY claustrophobic and then I read what you wrote...yep can so relate!!
Glad you had fun!

What a GORGEOUS property and lodge! When I saw the kitchen I thought,"now THAT is a farmhouse sink"!!!!! Just like I remember from my childhood with the built in drainer! LOVE!!!! I would have had a hard time in the cave too,I am not actually claustrophpbic but hate being UNDER things. I wouldn't have to run, but walk FAST:):) Thanks for sharing this, Delores! XO, Pinky

Well, to think I have been at Lake Tahoe and missed this gem! What a beauty and I never even heard of it! You can bet I will tour it if I ever get the chance. Great tour! xo Diana

what a treat, i grew up in incline and have seen this house many times from the water, how exciting to get inside! and that boat, classic tahoe, loved this post!

What a great place to tour. Your pictures are amazing. I loved that kitchen. Can you imagine cooking there!!! Wow, I am happy for today's spaces. Interesting history and beautiful scenery. Hugs, Marty

We have never been to Lake Tahoe but are putting it on our list of places to see. So beautiful. Hope you and your family have a great weekend!
Angela and Renee

We have never been to Lake Tahoe but are putting it on our list of places to see. So beautiful. Hope you and your family have a great weekend!
Angela and Renee

Delores, what a dream!! The setting in gorgeous! That yacht simply stunning. I would love to go visit Tahoe again it has been a while.

Come and join my new fashion Giveaway from Fresh Produce!

Wow, that Thunderbird Lodge is fabulous! It's very English looking isn't it? That yacht is spectacular to say the least! Oh my! Truly gorgeous! What a beautiful area to take a vacation!

What a gorgeous place. Thanks for sharing this. It's been years since I was at Lake Tahoe.
Have a great weekend!

What an amazing place, Delores! Thanks for taking us along. I'm not sure I'd like to be an eccentric like Mr. Whittell, but it might be great fun living life as a bon vivant!

Loved your Bridal Shower Luncheon post too -- so chic and elegant, beautifully done!

That kitchen looks like a little dollhouse kitchen! Is that soapstone on the island counter? Gorgeous! My boys would have had so much fun hooting and hollering in the tunnel. What a neat place to tour! Thanks for sharing.

i love it there.
you have totally captured tahoe in this post.
at least the 'tahoe' i keep in my head!

have a great weekend :)

I love Lake Tahoe.
Have a great weekend.
Victoria

Oh how beautiful! Can't wait to go back..we will be there in 3 weeks. This lodge is gorgeous..love the stone work. Tahoe is one of my favorite places. Thanks for sharing!

OMG! Such incredible photos, my dear! I love Tahoe, it's been 5 years since we went and that lodge is wonderful...you're having a terrific time, God bless you sweetie! Enjoy the weekend! Hugs, FABBY

I when to Lake Tahoe, while I was on a flying visit to CA. Trying to cover as much as possible in 8 days but I am glad we went there. It is one of the most beautiful places I have ever seen.

Thanks for sharing. I once took the boat tour and saw the house from a distance. What a charming house!
Makes me want to go back!
Char

LOve Tahoe!
I think the house is in Emerald Bay right?

And why did you go down that tunnel you crazy lady!
Makes me scared just looking at your photo.