A Wine Tour of the Italian Swiss Colony 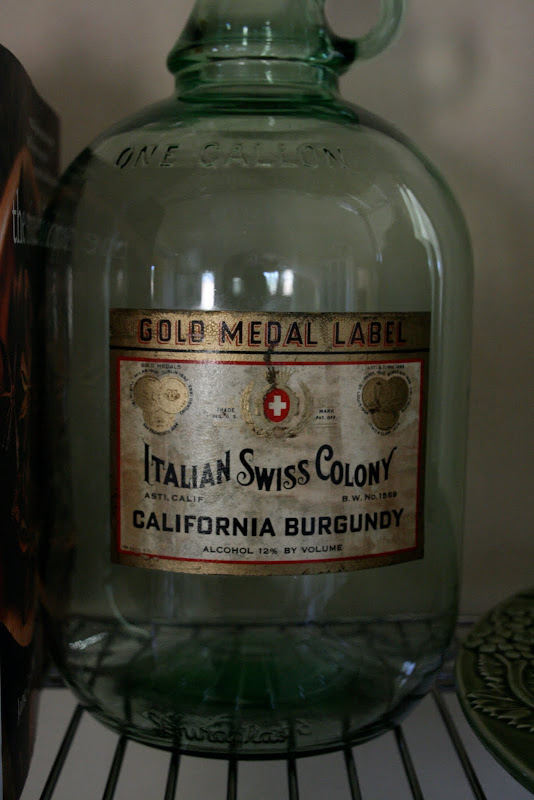 Our home in the wine country is located in Asti, home of the Italian Swiss Colony, which was founded in 1881.
The original winery is still here, although it is now called Cellar 8. It was closed for over 20 years and reopened the same time we bought our house just up the hill.
Recently, I found this old jug with the original label at an antique store.
It is a reminder of the history and rich heritage of Asti, California. 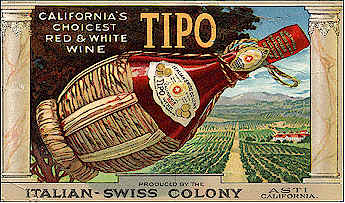 I remember the television commercials of the little swiss winemaker. At one time, this winery was the second most visited destination in California, next to Disneyland! 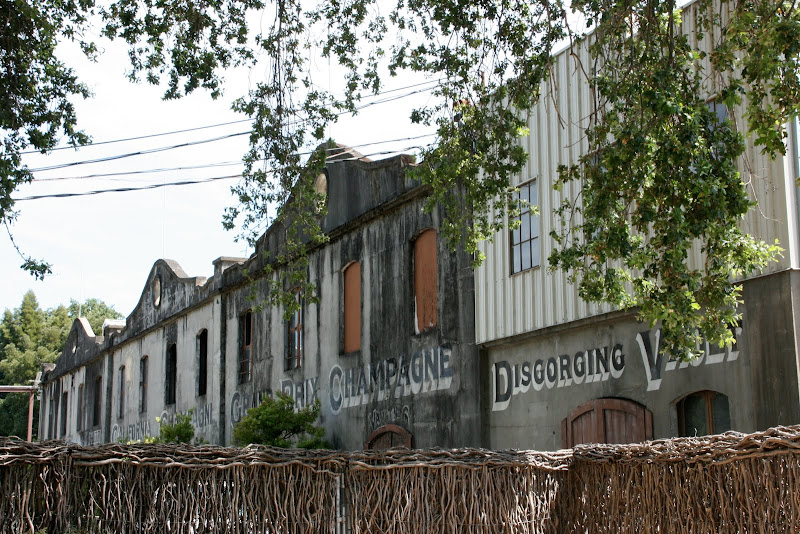 Whenever we have guests, we take them here for a tour. This wall is original, circa late 1800's. 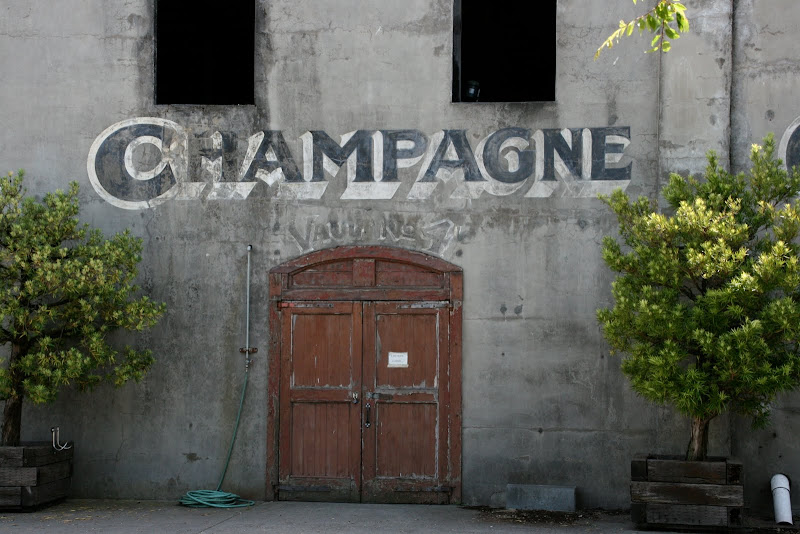 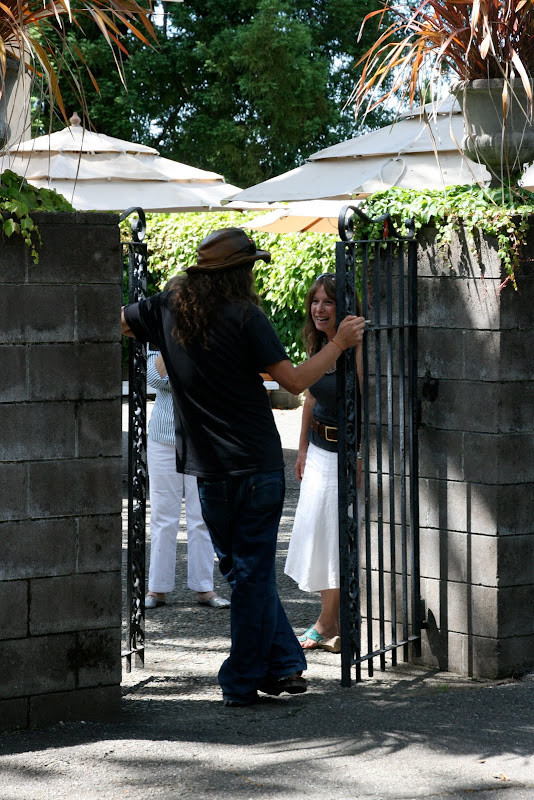 I took my daughter and her boyfriend here a few weeks ago for a tour. They are interested in the local history of our area and found the winery and grounds as fascinating as I do. 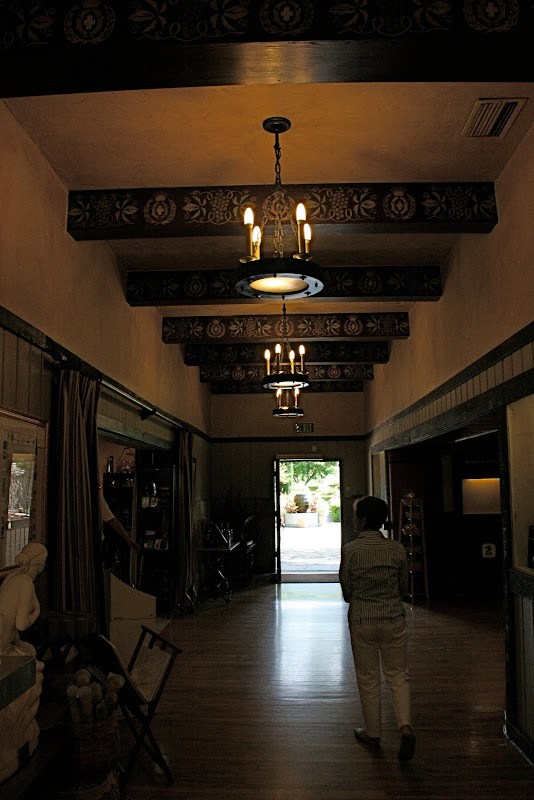 Inside the lovely tasting room, you can see the original stenciling on the beams, Swiss style. There is also a great gift shop here. 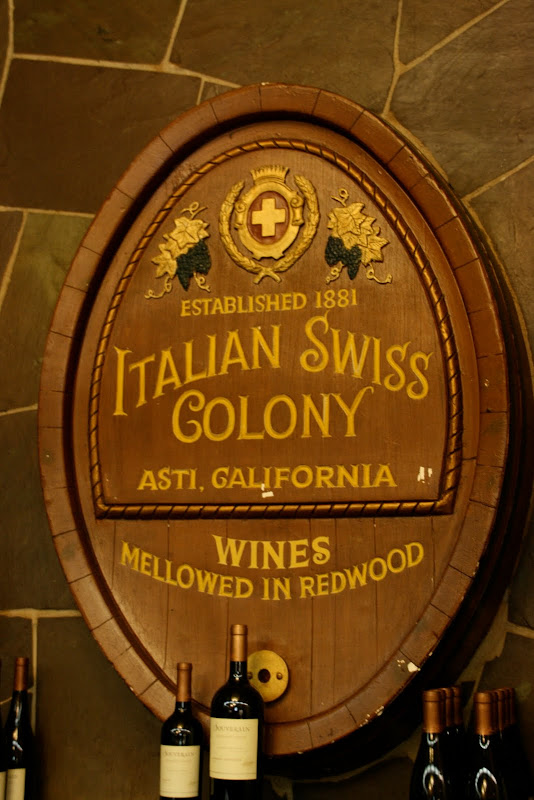 An original sign on the wall. "Mellowed in Redwood!"
A little history:
The origin of Italian Swiss Colony is in great part the story of Andrea Sbarboro, who came to San Francisco from Italy in the early eighteen fifties as a youngster to work in his brother's grocery store. Twenty years later, by working hard and saving, he bought his own store and turned builder and financier.
In 1881 he founded the Italian Swiss Agricultural Colony with the purpose of aiding Italian and Swiss immigrants to settle in their new land. Many of these were vineyardists by trade and a 1500-acre tract was chosen in Sonoma County, suitable for the planting of vines. The land was named Asti after the town of that name in Piedmont, Italy. Each immigrant was provided with room, board, and wages, in return for which a contribution was expected toward building up an equity in the land and eventually becoming an independent farmer. 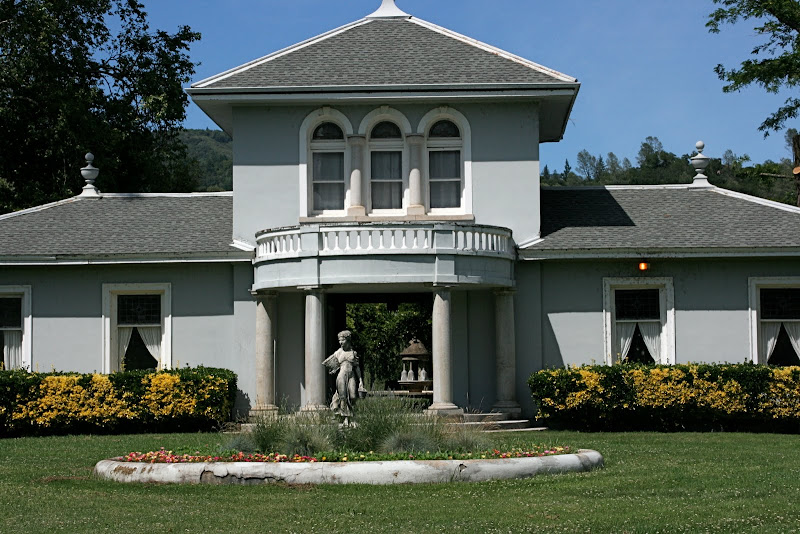 What I find fascinating is this villa that Andrea Sbarboro built in 1902. He called it Villa Pompeii. I was recently given permission by the caretakers to visit this deserted home. It is sad to see it in such a state of decay. 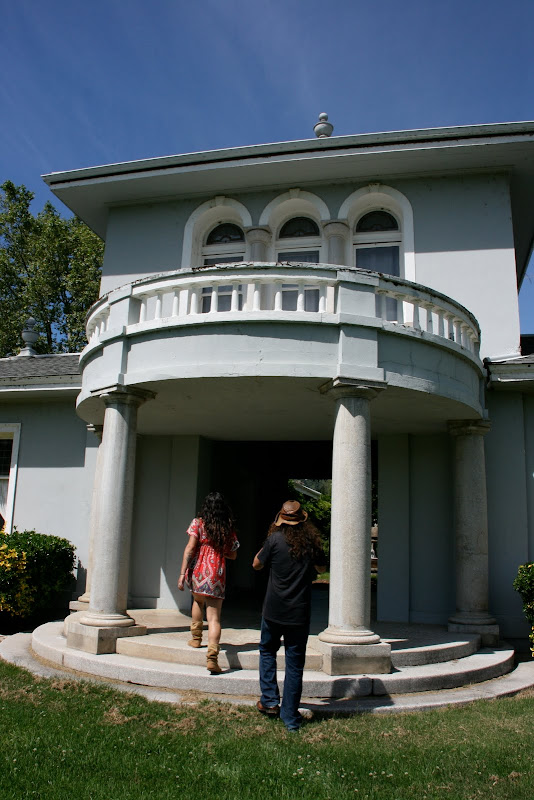 Upon entering through the portico, you can see the entry is actually a breezeway with a living room on the right, dining room on the left and master bedroom above. 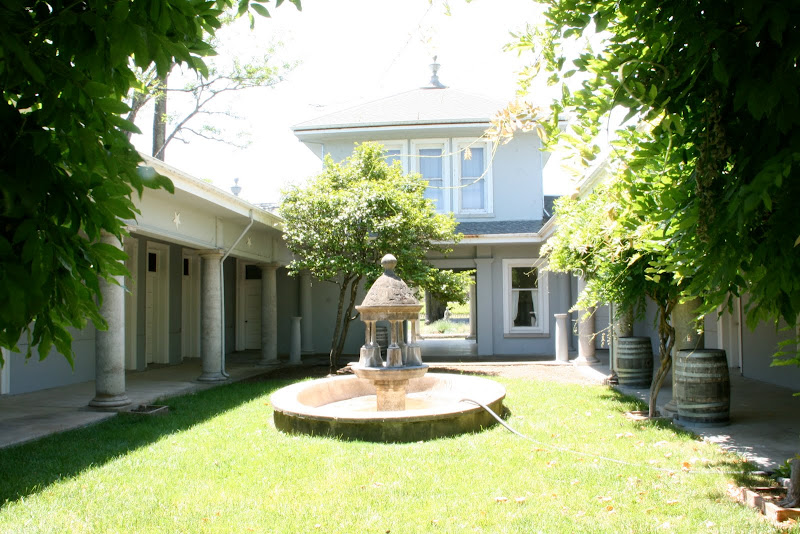 After walking through the portico, you enter the courtyard. Bedrooms are on the left, the kitchen on the right. It's a very unique design layout. 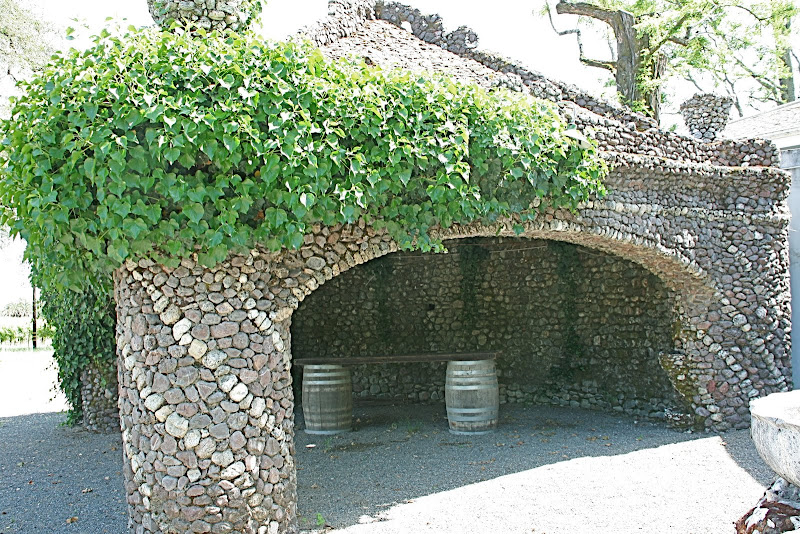 Surrounding the home are many rock structures. This one is a shelter for eating al fresco.
Notice how the whole structure was built in the shape of an old wine cask. 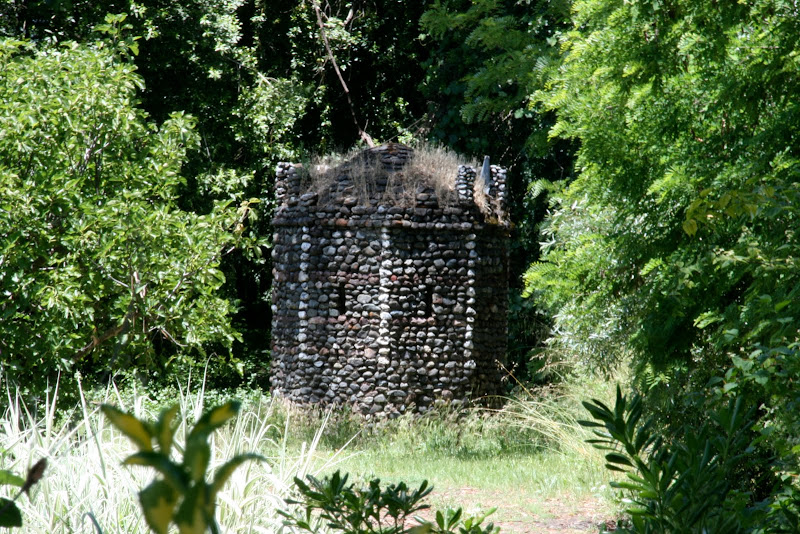 There are also many small structures as well. They were built as "meditation chambers." 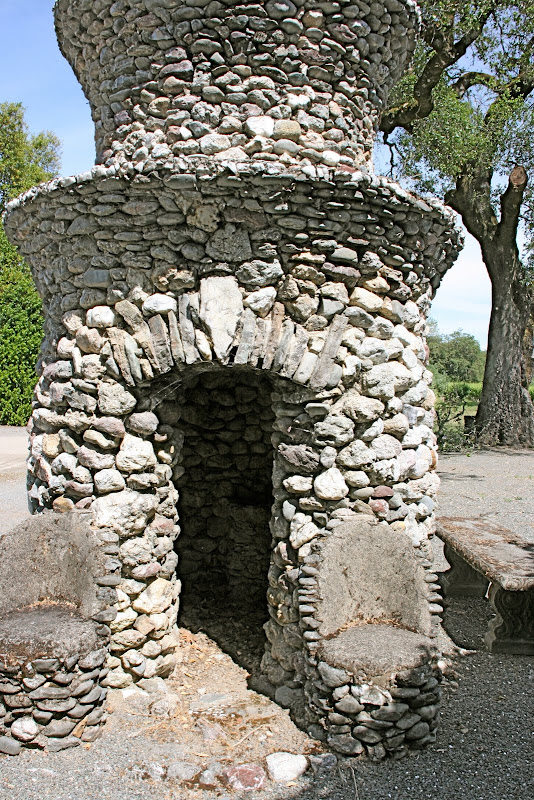 Or perhaps to escape the heat during the summer. 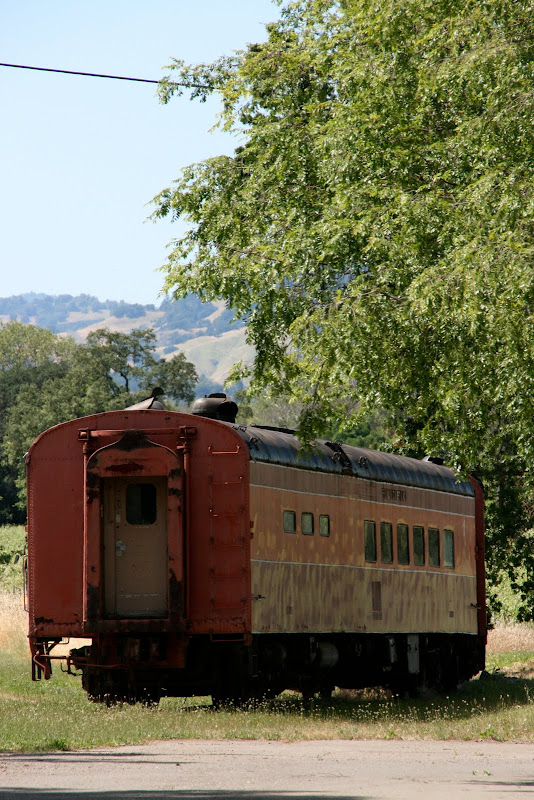 The train stopped here! Mr. Sbarboro brought his friends here from San Francisco on weekends and entertained many dignitaries too. 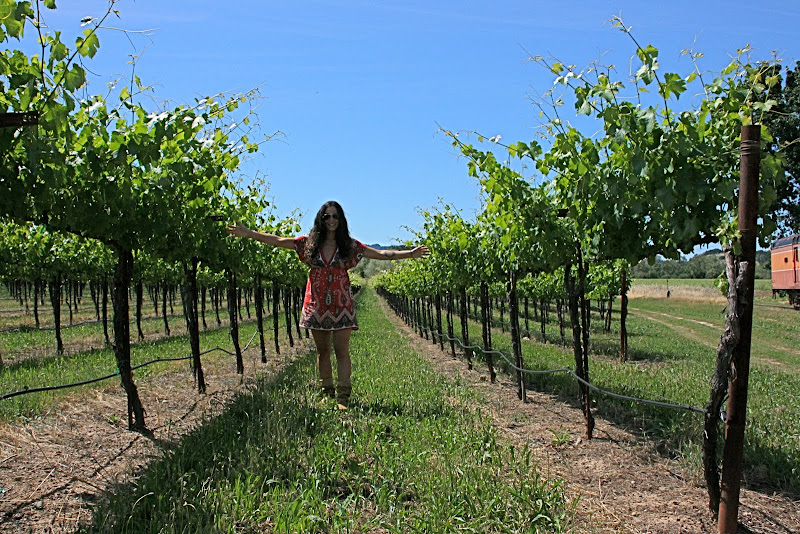 Ashley in the vineyard. 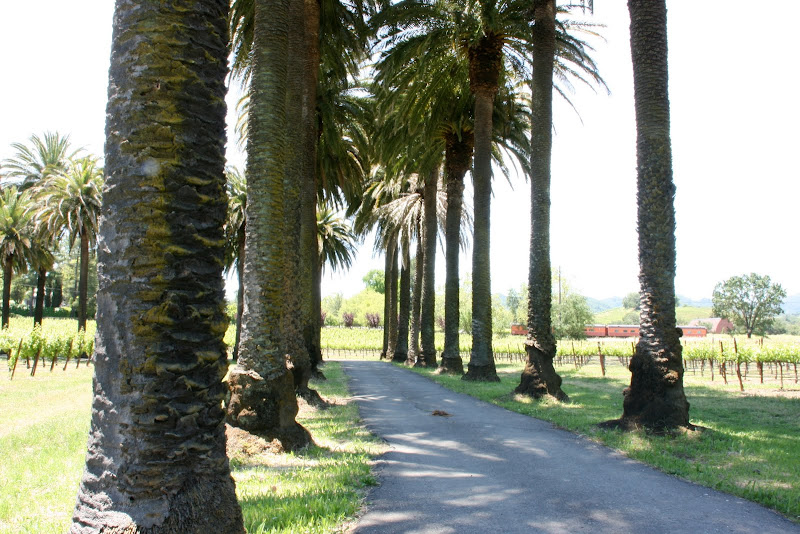 This is the road from the winery to Villa Pompeii. It is a gorgeous allee with the date palms dating back over a 100 years. 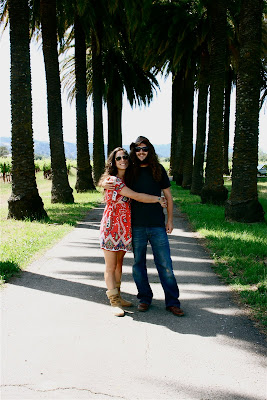 The "kids" loved the special tour. We were lucky to have been given permission. Apparently, no one gets to tour the old home for insurance reasons. 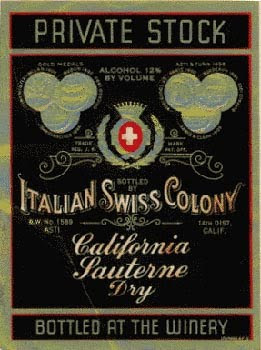 Another old Italian Swiss Colony wine label.
This is a vintage commercial from the 1960's for Italian Swiss Colony. It will take you back--if you are as old as I am!
This is a recently produced video about the history of this wonderful old winery. I hope you can take the time to watch it--it's quite good!
I'm linking up to Susan at A Southern Daydreamer for Outdoor Wednesday!
Thanks Susan for hosting!

Posted by vignette design at 9:03 AM

Thanks for such an interesting, fun, and informative post! We enjoy drinking Cellar No. 8 and so I especially enjoyed the video tour. We have friends in Sonoma and hope to visit there someday soon. Thanks for giving me an early taste!

What a gorgeous place. The old house is fantastic. I hope they restore it. Great video, thanks so much. Very interesting. Hugs, Marty

Oh My Gosh... What a great post Delores! From the Vintage gallon bottle to the You Tube commercial! (that yes, I do remember!) I loved the Villa Pompeii and have always loved that style of architecture! I would love a home with a courtyard like that here in the desert!
I like the new blog design too...
Have a great week end!
~Rainey~

I would use any excuse to go visit there on a regular basis. How interesting.

Wonderful post, Delores, from start to finish! Enjoyed hearing the history as well as seeing your wonderful photos. I would love to visit California's wine country.

German immigrants settled near where we live, in Hermann and other areas of our state and began winemaking during the 19th century. There are many wineries in our area. Just down the road from us is the weinstrasse. We enjoy spending the day traveling the road and visiting various wineries. Especially during Fall when the weather is cooler.

I don't think many people know about Missouri's rich winemaking history. I should write more about it sometime. You've inspired me.

Nice post - Thanks for the tour and I enjoyed reading about the history of the winery. Hopefully, someone will buy the old home and restore it's beauty.

Absolutely LOVE your blog ~ also can tell that your interior decorating tastes are similar to my own! I am a new fan and follower!!

Just beautiful...the winery, as well as the house. The home needs someone to bring it back to it's glory. I have always loved mediterranean style homes and especially those with a courtyard.
xo, Sherry

Delores, I love that wine bottle and I do remember that little jingle to that commercial. Thanks for sharing the history of the winery with us.

Very interesting. I feel sad for the house, which would have been so pretty. Thanks for the tour, Delores!...Christine

Delores, This post is so interesting. The way Swiss colony got its start is such a wonderful story. The buildings look as if they are in Italy. I loved seeing them. I'm so glad that someone reopened this remarkable place. Now if someone would just do something with that villa. Those garden structures are incredible. What workmanship went into the winery and the villa. Loved the old commercial! The video was very good too. So many reasons I would love to visit Asti-this winery, your guest house, the gorgeous scenerey, and you. laurie

My goodness, what a great walk down memory lane. I remember those old commercials with the little winemaker in them but forgot all about this brand over the years. So interesting and fun. I hope someone restores the home and outbuildings some day...I'm sure it would be so gorgeous.

How beautiful, but what a pity that the house has just been left like that!

What great history! Such beauty in all the rock structures!

What a wonderful post!!! I remember those commercials! That home is gorgeous, what a shame that it's vacant!

What a beautiful place so full of history.
Thanks for the tour!
Pamela

That was quite an educational blog! Great job done on photos and for putting those two videos up as well. It is a shame though that the present Asti Winery doesn't preserve Italian Swiss Colony's history by renovating the great Villa Pompeii... The USA has so little history and it breaks my heart each and every time I see some of the few gems they HAD to see going down into decay.
Love to see my favorite date palms! Great time for your daughter and her boyfriend; quite a unique opportunity to tour with you all these historic buildings!
Thanks for pointing me into the right direction for the button. You can grab yours now on my blog; got it on!

I've been flying below the fifi radar ... but I'm back
you're making me thirsty

stop over for a chat

Unique tour. Can't remember if I was ever there?
Joyce

What fantastic information! I had no idea this was there! Such a beautiful place, it is sad that it's not being better taken care of.

Just came across your blog, What a great place. I love those Stencilled Beams :-)

Hi Delores...wonderful! As much as love Provence...I also love our Napa, St. Helena, Sonoma backyard. Thank you so much for the great tour. Especially loved the Champagne photo...saved in my files under your blog name. Gorgeous! Trish

Hi Delores,
I so enjoyed your post today! The old villa is so charming with great history, you can almost feel it come alive. Wouldn't it be a great wedding spot if re-built..... wonderful photo ops...
Take care and enjoy your day,
Hugs, Elizabeth

Delores, I loved this post but I pretty much love allll your post, I too, remember the commercial. How special that you were ablt to tour that wonderful old building, but sad that it is in dis-repair. Cute pictures of Ashley and BF!! You looked great in your pict. also, Hugs Kathysue

Wow!! What a great place and how fortunate you were to get to tour the place.

This is a wonderful post! I am totally intrigued by every part of it! All those rock structures are incredible, especially the one shaped like a wine cask!

Loved the tour -- when I am down in that area I will sure and visit this beautiful place. I agree it is a shame to see that villa in disrepair. I love the unique stone structures and outdoor buildings I believe they are called garden follies.

Love the tour and the photos are beautiful. What a shame about the house.

Your blog is just gorgeous.

What a wonderful tour you gave us and how lucky you are to live in such a beautiful area. Thanks for sharing!

Oh those pictures are just amazing! so much history and so much to learn about the way that wine was made in this Italian-Swiss colony. Thanks for sharing your story with us. Now I need to get myself out there and enjoy the beautiful area and have some great tasting wine!

What's a wonderful pics. i like it. thanks for sharing Italian wine pics and information. if any body want to know more information then please visit: Italian Wine Tours and Cooking Tours in Italy

this was great to see but somewhat sad to see the state the villa is in now,i was married there 25 years ago and just spoke to a manager at the new cellar no. 8 he is going to grant my husband and i permission to the villa on our anniversary this year on august 31st,but now i think i might cry when i see the sight of it in it's state in 2010,it brought us much luck and we are happy for that!