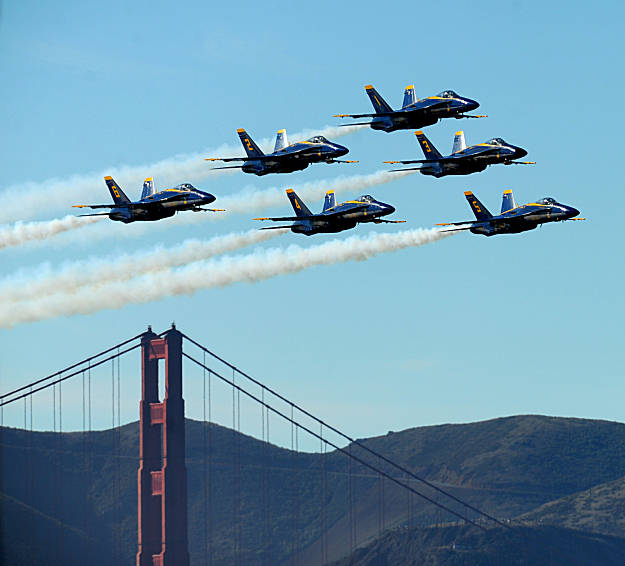 The Blue Angels were in town this weekend for Fleet Week in San Francisco. As we were trying to get over the Golden Gate Bridge Sunday afternoon, they were flying over and performing their stunts on the Bay. 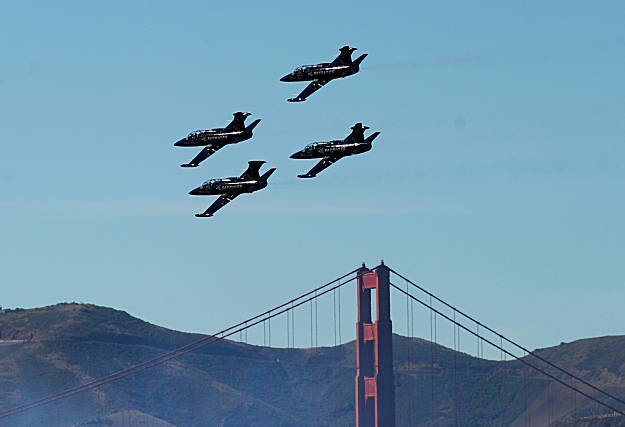 What a thrill to look up and see them flying over! 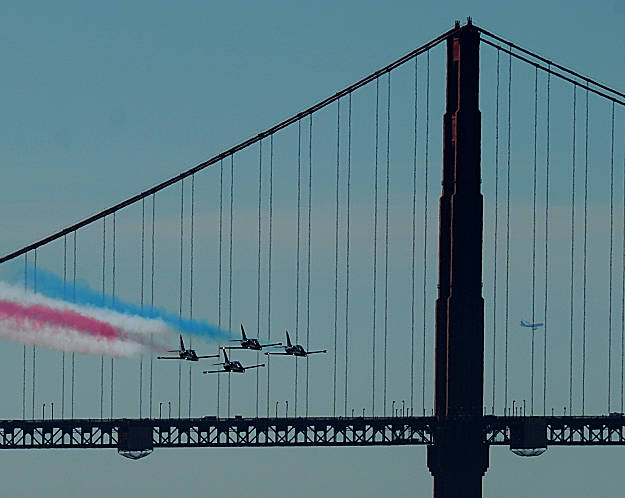 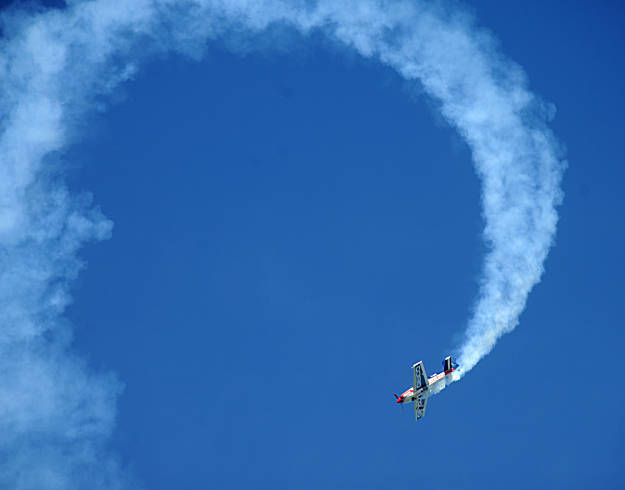 These photos were taken by a professional photographer for the Chronicle, but I attempted to capture the excitement below with my Canon Rebel and telephoto lens. 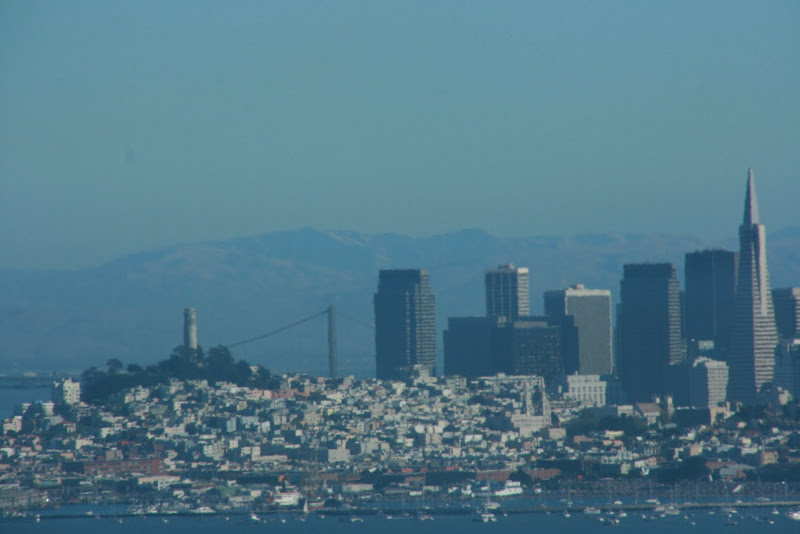 Keep in mind, I took these photos in a moving car! 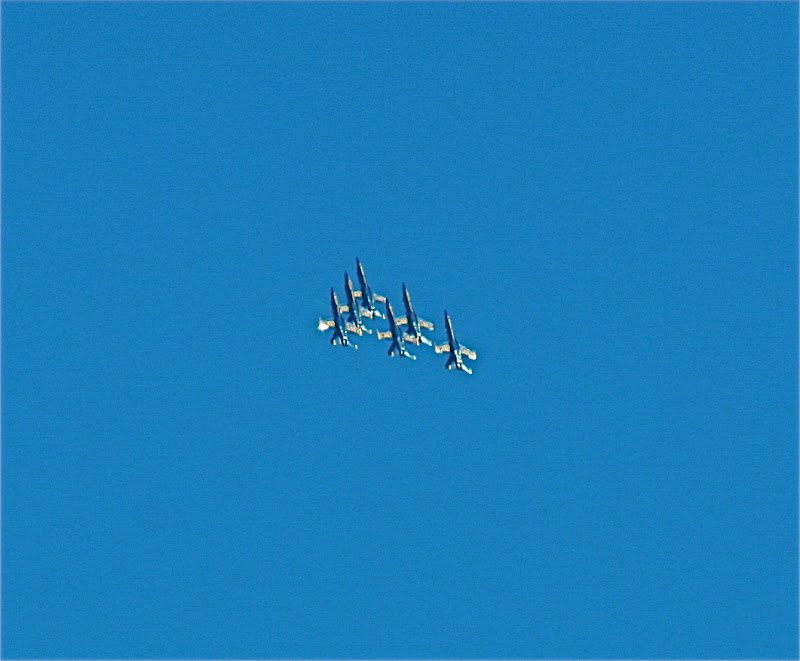 I just clicked away and hoped a few photos turned out. 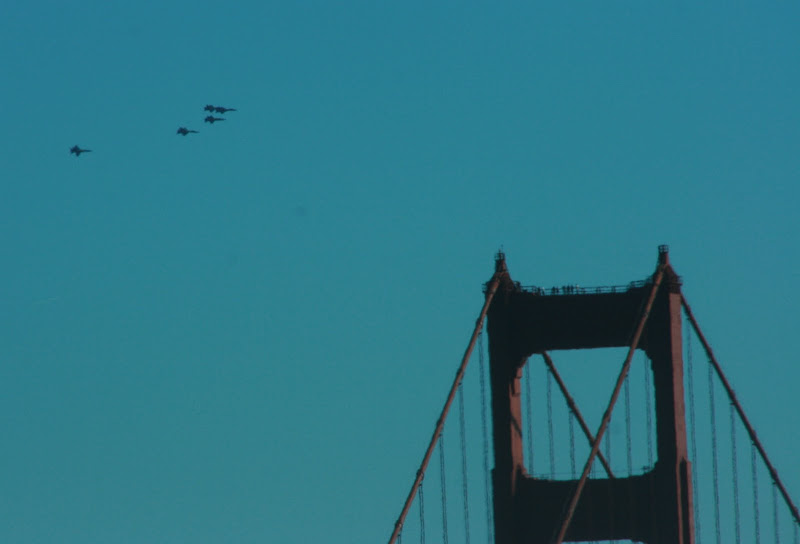 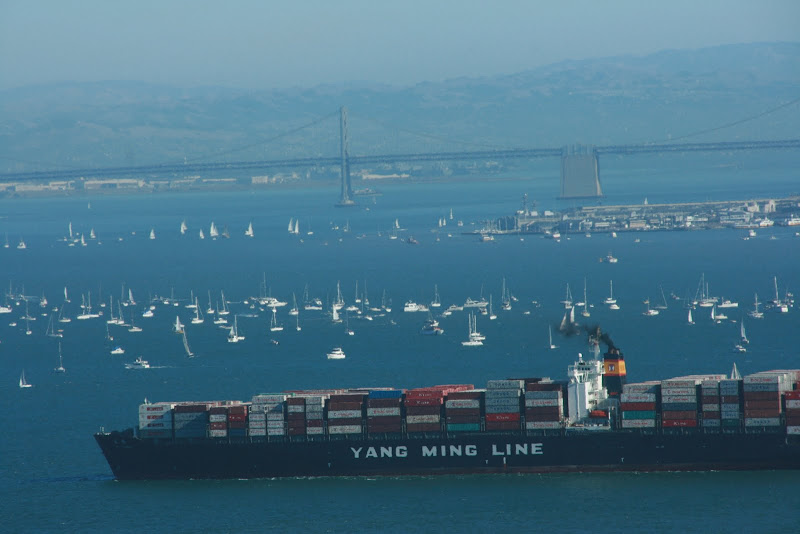 It's so cool to see all the ships and sailboats on the Bay. 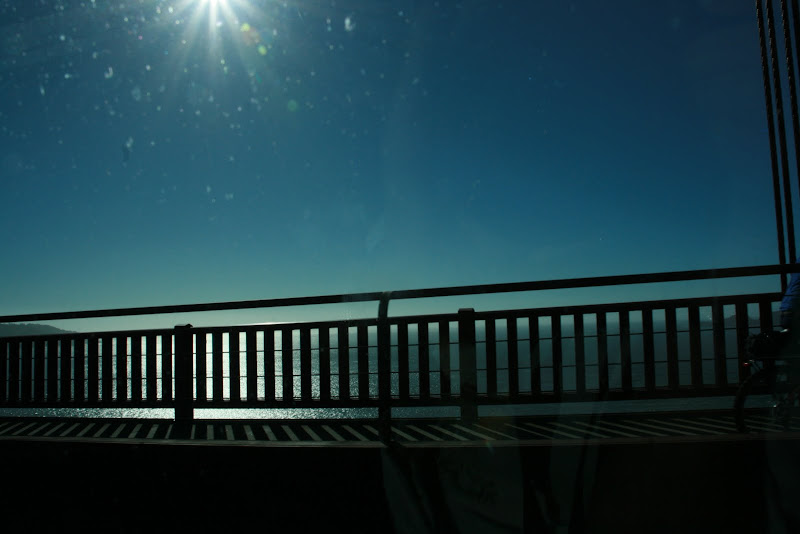 Looking west, the sun's reflection on the Pacific Ocean was blinding. 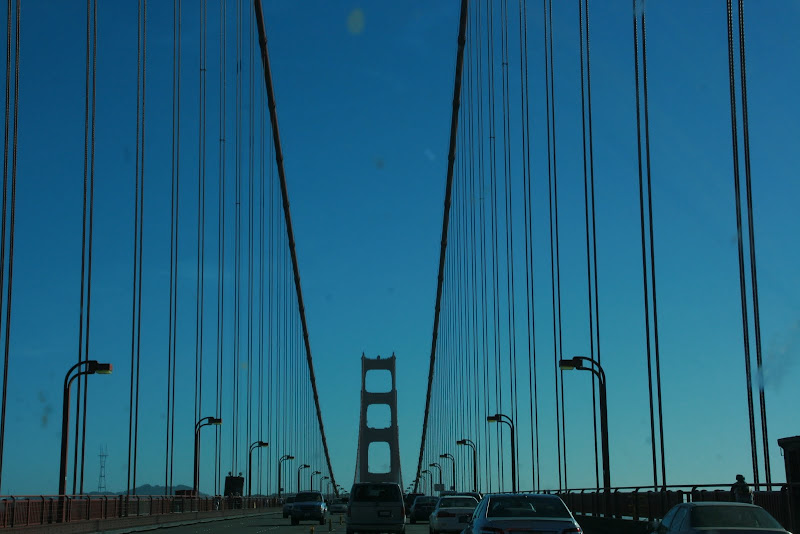 It was one of those rare days in San Francisco. The temperature on the bridge read 75 degrees.
It's usually 58! We had the Giants game on the radio and the Blue Angels overhead! 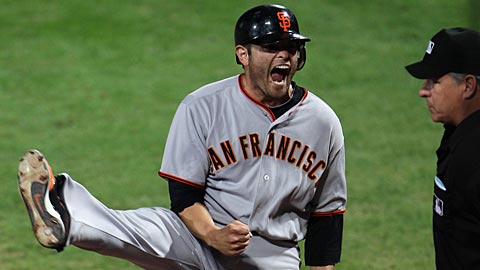 We got home just in time to see our beloved San Francisco Giants beat the Atlanta Braves!
It was all good on 10-10-10!
I'm linking up to Susan at A Southern Daydreamer for Outdoor Wednesday.
Just for fun, check out the video below. It really captures the exciting Blue Angels air show over San Francisco Bay.

Posted by vignette design at 10:54 AM

Oh this is simply lovely.. I love watching the air show as well...

Hope you have a fab week ahead..

Oh.. and do come and join my weekly weekend wrap up party.. (when you've got some time) :-)

Beautiful Blue Angels and you did great in a moving car!

Awesome! The Blue Angels are pretty amazing--& so is Sf Bay!

Fun that you took me back on the Golden Gate Bridge where I drove many times before. One time I even had the pleasure to take my Dad along, visiting from The Kingdom of The Netherlands. No Blue Angels flying overhead though... That must have been awesome and as you said; ALL was good on 10/10/10...

Sunny greetings from the heart of Georgia,

I have seen the Blue Angels perform many times since my hometown is also the home of the Blue Angels, Pensacola, FL. Often they will do a show in Pensacola over the Gulf of Mexico which is always fascinating to watch. That was breath taking seeing pics over the Golden Gate bridge. Thanks for sharing.

Delores, seeing these photos of the Blue Angels reminds me of my childhood. When we lived on St. Simons Island, Ga. my dad took us every year to see them perform. I was amazed at what they could do. It was so thrilling. When we went to San Francisco many years ago it was above normal temps, but nice.

How fun! I was there for Fleet Week in San Francisco about 20 years ago and it was so fun. It was the first and only time I've seen the Blue Angels. And believe me my photos from my sad little camera back then just didn't do the job. Thanks for triggering some fun memories for me!

The City by the Bay - never changes much, just as beautiful as always and I love to visit!

Your news is exciting Delores - my wishes for a fabulous time!!

They are an amazing group. I was wondering how you managed to take such awesome shots from the car.
Not that yours aren't great too but the pro ones...well.
What is the best time of year to visit San Fransisco? We keep talking about heading down there but neither one of us have been before.

You did a great job taking the pictures while moving in a car. :D
Great shots of the bay.

Great photographs! We watch the Blue Angels every year when they come to Traverse City, Michigan. They fly over Lake Michigan during our Cherry Festival.
Stop over at my blog and check out my Barnes & Noble GIVEAWAY!

The Blue Angels are pretty amazing and so are your photos, Delores. The Chronicle ones are good but you also got some great ones! I have to say I felt terrible for my husband yesterday. He's from Atlanta and is a die hard Braves fan.

WOW! What a glorious weekend you had! Or should I say day... I would have loved to see the blue angels, being an Air Force brat. I saw them several times as a girl... it is something you never forget. What gorgeous photos you borrowed to show us, and yours are great too!
Congratuations on your hometown team win.
Gotta love a true fan!
What a fun post!
Sharing your joy!
Yvonne

Our son called us from atop the GG Bridge as he was biking over it Sunday.... He wanted to tell us he could almost touch the BLUE ANGELS... An experience, I am sure, you will hold for a very long time. Sounds like the perfect Sunday(except for the Braves losing game #3 !@#$%^&*)
Take care

Stunning! And what a backdrop! Just breathtaking....

I have seen the Blue Angels in Tampa, Florida and they are amazing!!

What a beautiful part of the country you live in...

Have a great week!

I can imagine how awesome that was! Just wanted to let you know that I mention you on my Comforts of Home blog today.
Penny

Hi, Delores,
I came here from The Comforts of Home and I love what I see! Such a gorgeous blog and I'm going to spend some time reading and getting acquainted.

We were in San Francisco a little over a year ago and the Blue Angels were 'rehearsing' a fly over for a special event. We were down on the wharf and - oh, my! - I didn't have my camera. I had carried it all day and had left it in the car while I ran into a business to get that special something I just had to have! My sweetheart sat in the car and enjoyed the site of the wonderful planes, never thinking to grab my camera and get it to me. Thanks for sharing your photos - it brings back such happy memories.

I will be back again soon.
~Adrienne~

The Blue Angels are amazing. We have the EPA here in WI and they always make an appearance. You did great for taking those shots from a moving car...wow! xxoo Diana

The Blue Angels are amazing, it must have been spectacular to watch them flying over the Golden Gate Bridge. . .They came to Idaho this summer, what a show they put on!

Delores, what awesome photos from a moving car. You are amazing!
I grew up near an air base and saw the Blue Angles perform many times. They put on an wonderfu show. Thanks for sharing this. It brought back fond memories. ~ Sarah

How fun to see them while you were driving over the Golden Gate! That's not something you see everyday!

such fun shots of the bay. the nut tree had an air show this weekend too, far cry from the blue angels, but still fun to see~

What a cool sight to see the Blue Angels flying over the Golden gate Bridge. Wonderful photos.

I have seen the Blue Angles, but never photos of them this good. These are breathtaking by the professional and you as well.

What photos and what a day. Made me feel like I was there.
That one pic looking up the bridge is incredible.
Ya...canon rebel!
xx
C

What cool pictures!! We've become Giants fans since Brian Wilson & Mike Fontenot are on the team. Both played college ball at LSU & we've been season ticket holders for years. It's fun to see them so successful after watching them when they were just poor college kids.

The Blue Angels are from Pensacola, Fl and they would put on airshows over the beach several times a year. We would sit on our second floor porch and watch the show!
Hugs, Sherry

Wonderful photos! I think watching the Blue Angels is so exciting...your photos were wonderful!