Tourshi Catering is on a roll right now! For those who don't know, this is #2 Daughter Ashley's catering company -- until recently. Now, it is a family affair with the addition of her brother (the dessert guy), her Mom (the tablescaper) and her Dad (the financial backer)! 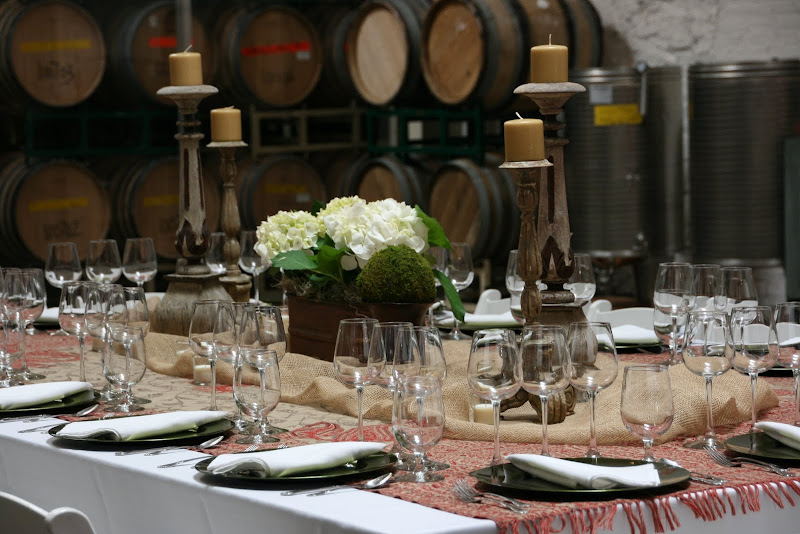 We pooled our talents last Saturday for a dinner party at Bluxome Street Winery.
The event was for "The BNO Wine Group," the wine group that Mr. A belongs to. The wives were included for this particular event. I was a working guest, so to speak, since I was called upon to set the table for the 16 guests. 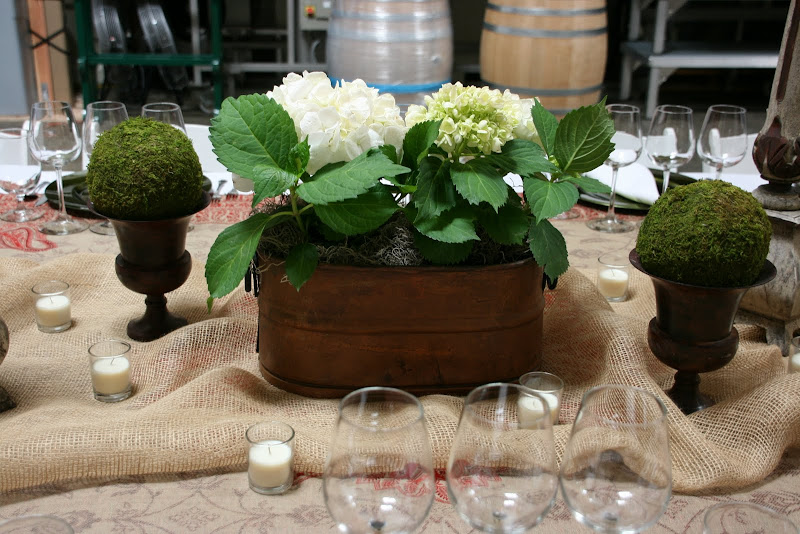 I rented the tables, chairs, tablecloths, plates and wine glasses, but brought in the wool paisley table topper and charger plates and other tabletop accessories. Since the theme for the dinner was Southern Italy, I tried to give the table a traditional feel, perhaps suggesting that everything used has been in the "family" for generations. 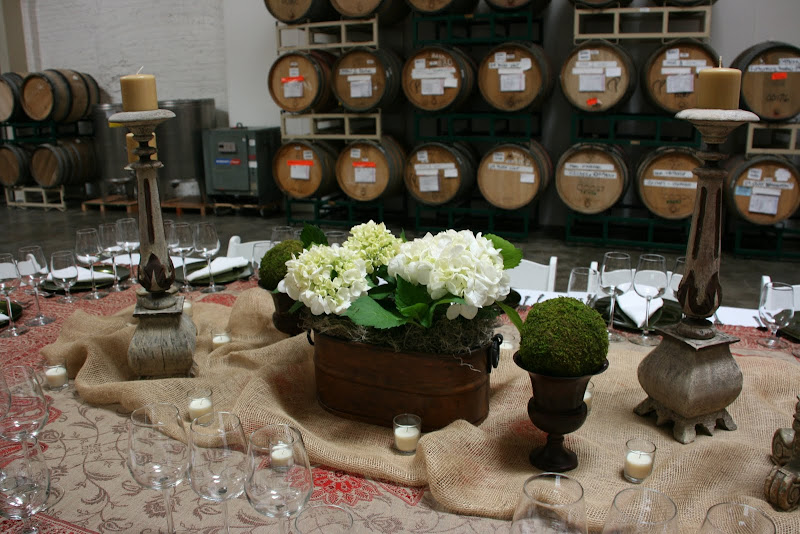 I crumpled up garden burlap in the center, mostly to cover the wax spills and to protect it from more spills! A copper tub filled with hydrangeas served as centerpiece with copper urns and moss balls. I added large wooden candlesticks on each end. 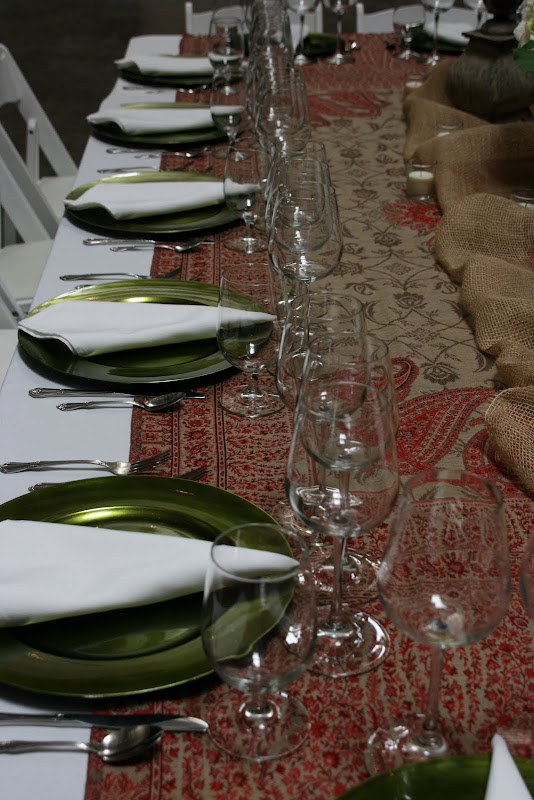 I thought about writing little Italian or Sicilian proverbs on tiny cards, then tying them with twine around the napkins, but ran out of time.
Sayings like "Di guerra, caccia d amuri, pri un gusto milli duluri"
(In war, hunting and love, you suffer a thousand pains for one pleasure!)
next time... 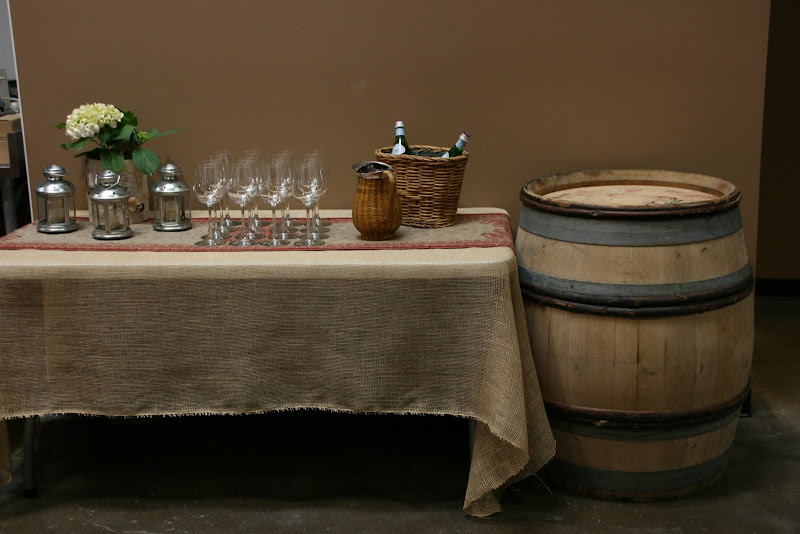 I set up a bar at the entry of the winery. Again, the garden burlap came in handy for a makeshift tablecloth topped with the paisley runner that matches the main table's paisley cloth. 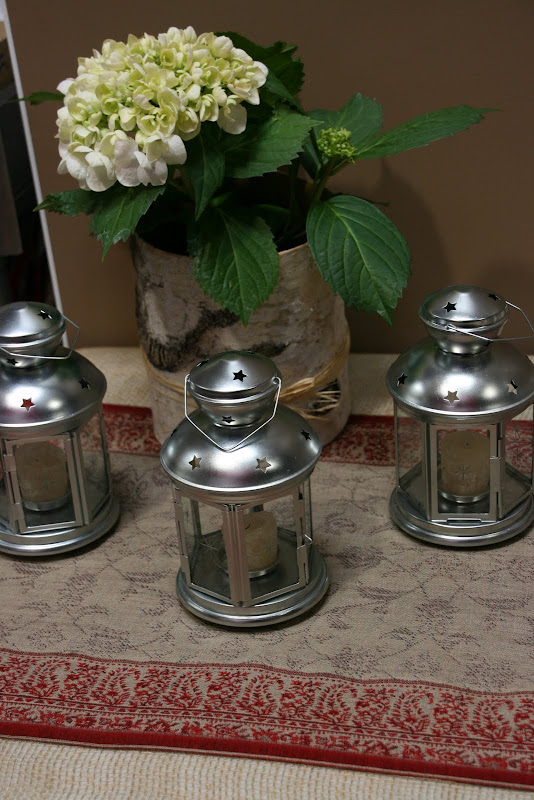 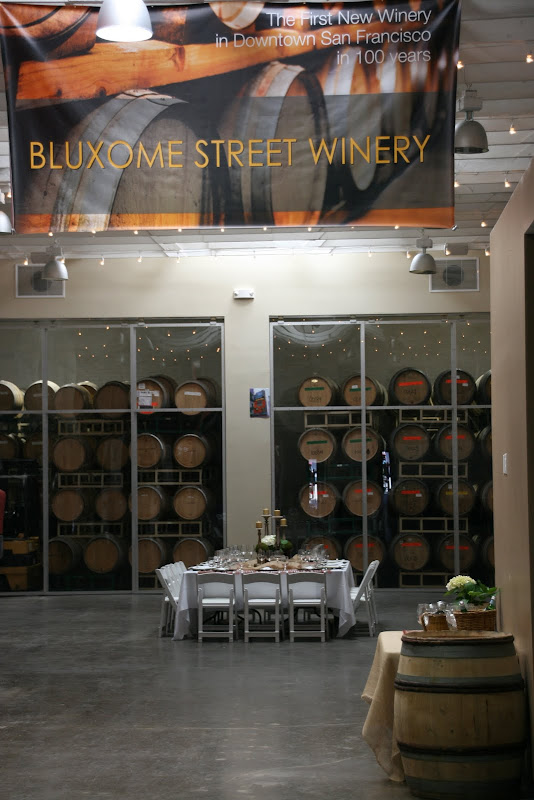 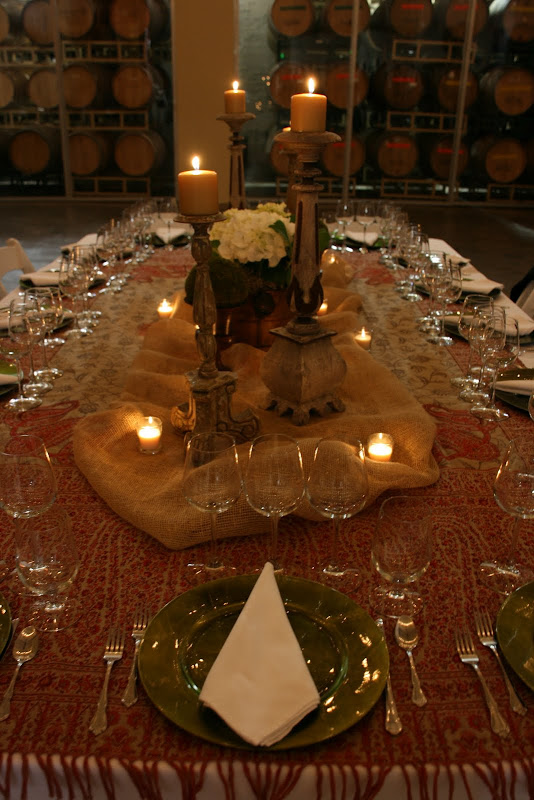 The table looking very festive at night with all the candles lit. 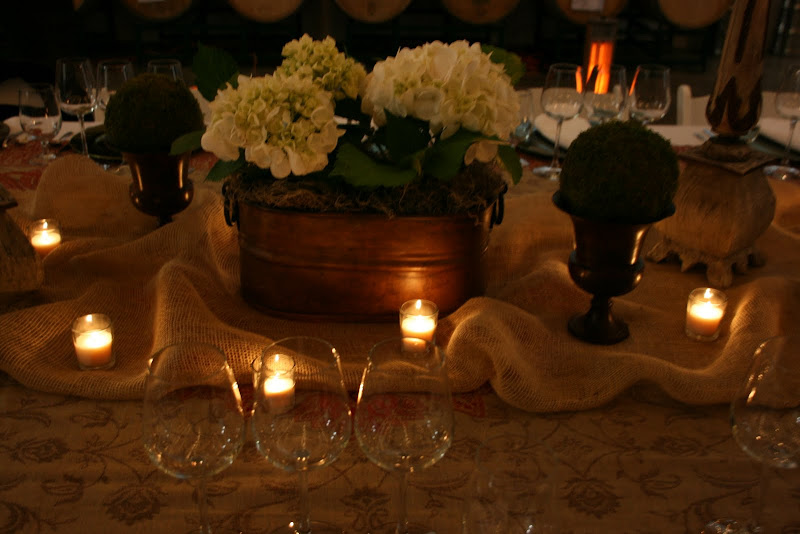 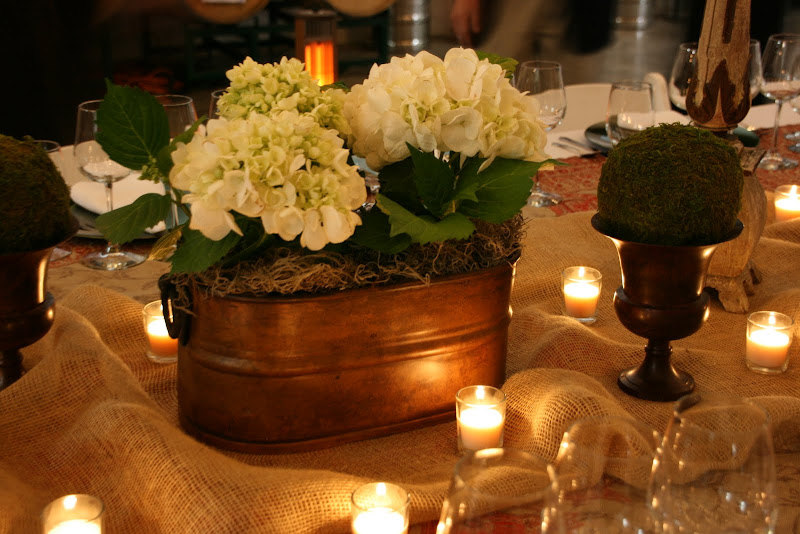 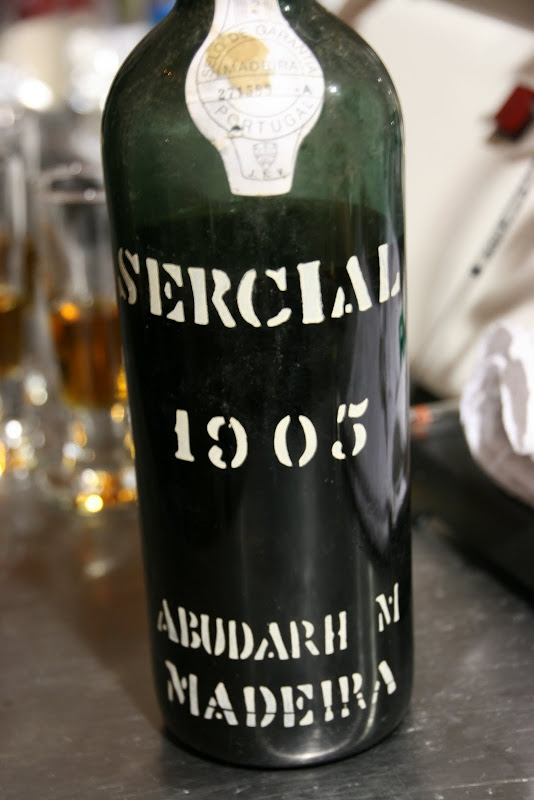 One of the BNO members brought this 1905 bottle of port to begin the evening. He chose it in honor of Bluxome Street Winery being the first urban winery in over 100 years in San Francisco! 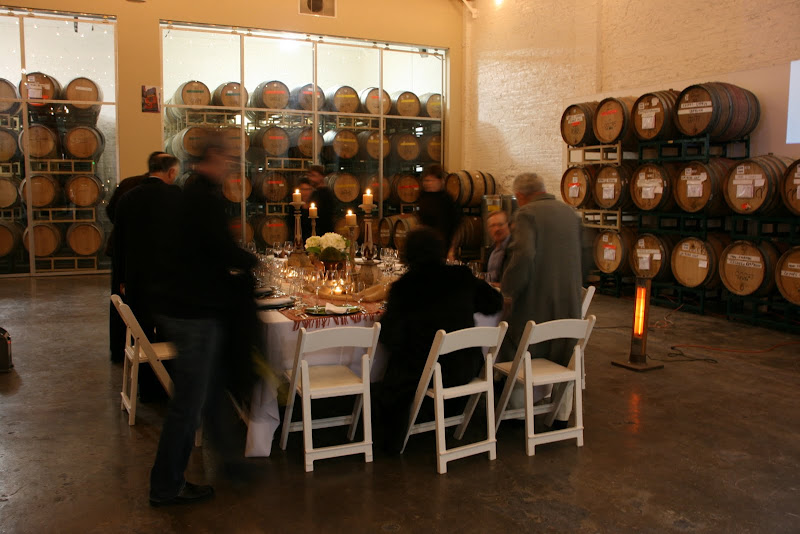 Dinner is served!
The first course was a farro risotto with arancini, a sheeps's milk ricotta, paired with a beautiful rosè from Mt. Etna, Italy 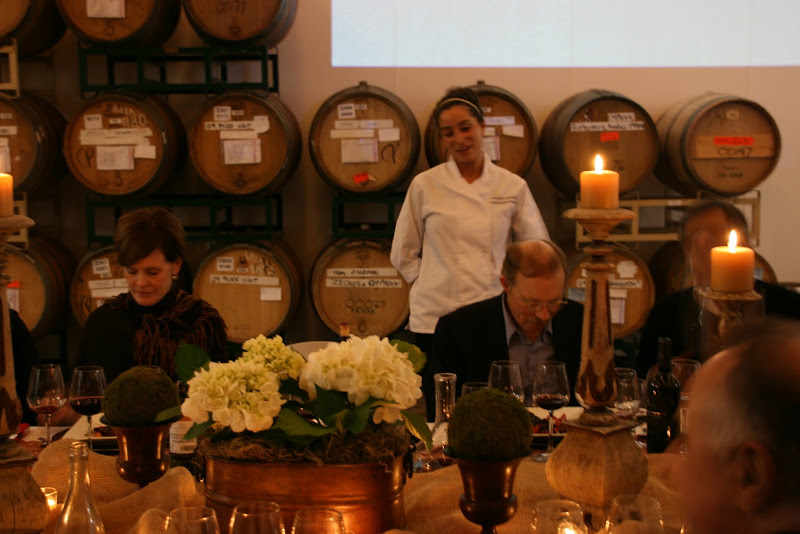 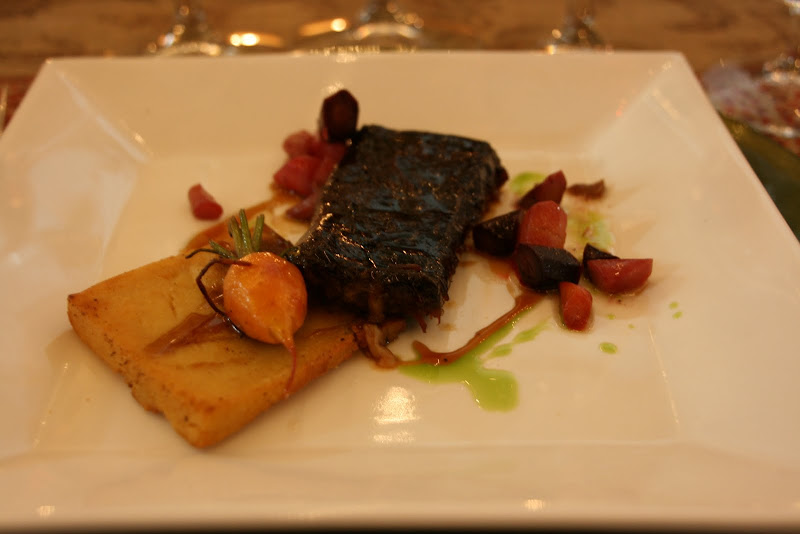 The fifth course: braised goat rillettes, agrodolce, chickpea panella.
I was quite skeptical about the goat, I'll admit, but it was absolutely incredible. 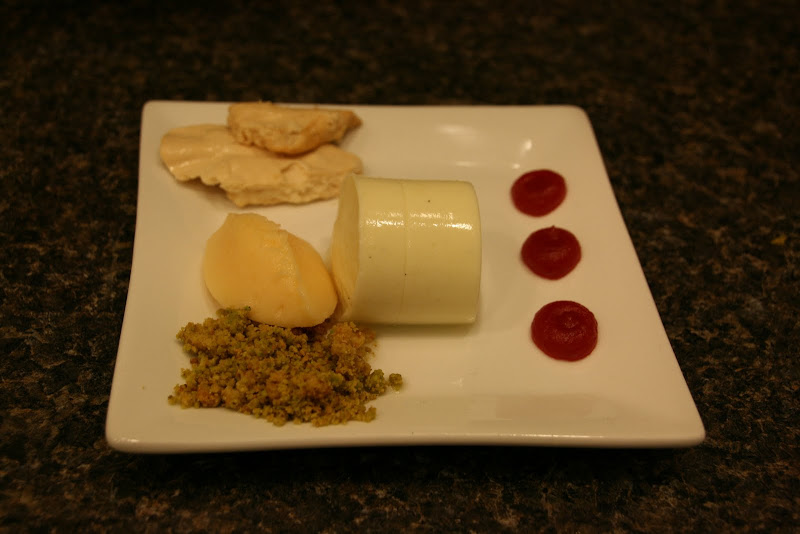 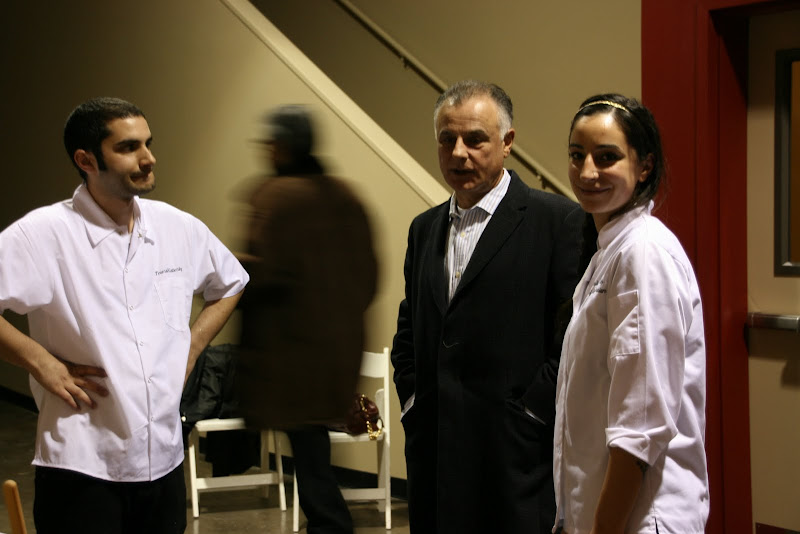 Three quarters of the Tourshi team! 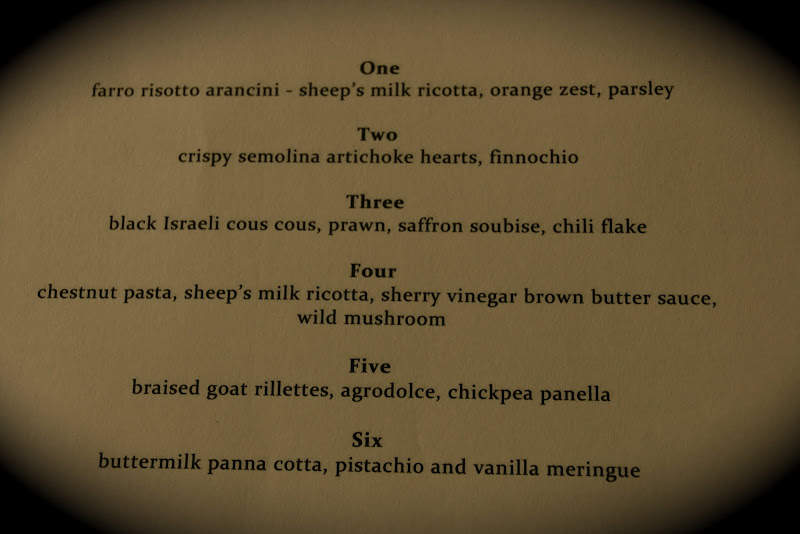 Le menu!
A huge thank you to Bluxome Street Winery for hosting this memorable event.
It was amazing exploring both the food and wine from Sicily and Campagna.
This is the second event I have created the table setting for at Bluxome Street Winery.
The winery plans to be open to the public in the spring. Visit their website here for more information. 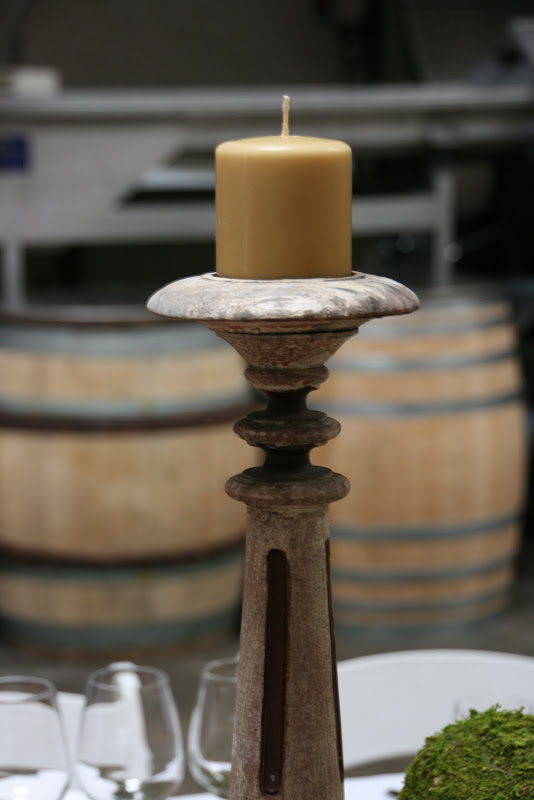 Tourshi Catering now has a website too. We are working on a link that will include Aaron's desserts and my tablescapes.

I'm joining Susan at Between Naps on the Porch for Tablescape Thursday,
On Friday, I'm joining Foodie Friday at Designs by Gollum.

Posted by vignette design at 3:18 PM

Beautiful tablescape as always Delores! The menu sounded devine, just not to sure of the goat. How nice it must be working together as a family. Martina

Gorgeous table in a great setting. What fun to do this together. How nice to have kids that cook like that. Yum! The table looked so good in the candlelight.

The table is stunning! Even the side bar table is gorgeous! I always look forward to seeing your tablescapes. You really have such a talent!
Shelley

What an absolutely lovely table! The Paisley tablecovering is really beautiful. Putting the burlap down is a great idea to save a tablecovering! Lovely centerpiece too. Perfect for the setting. What a scrumptious menu. A truly lovely and gifted family!

Bravo Arabians! This is what family is supposed to look like!

Delores, Congratulations on a successful family venture! You have a beautiful family! Now I'm thinking you have one in college abroad in Europe, so this son must be another one? The food looks delicious. I have never had goat either! Did it taste like chicken, as always seems to be the explanation for unusual meats? I think that I would fill up on the ricotta and the artichokes, before I even reached the goat course! I would like to steal your idea of the proverbs on twine napkin rings. Your tables and posts are always an inspiration to me. I have been thinking about my own bucket list! Linda

Beautiful family,food,and tablescape, WOW!, Yall got it going on.
Good luck!..can't wait to see, more, this is so exciting, I can't wait to see your families next creation.
~Jo
LazyonLoblolly

Bravo=Beautifully done, my dear! And what fun...I love that Dad is the financial "officer"...my kids just call Dad the "bank"....lol..financial officer sounds so much better. xxoo Diana

Where do I begin.....!? First, Congradulations to your daughter and your whole family, I am so hapy for you!!!
And the table is just perfection for a winery. I love your use of garden burlap~ who knew it could be so very chic and upscale. I also LOVE the wine barrel next to he table. I can imagine how your fabulous table set the tone for the whole evening!
Oh my.... the menu! Oh!I hope you got to sample all these delicious courses and the port!
Tourshi must be a smashing success!
I am thrilled for all!
Yvonne

How wonderful to have a family business. Your table is beautiful and the food looks fantastic!

Beautiful! How wonderful your family is working together.

It's all so lovely. I particularly like the pop of the green plates. Yum!

Your table is just gorgeous. I love the way you use the burlap and I have taken a cue from some of your other posts and am now using more burlap. I finessed some wide burlap on my mantle after the holidays and am having a garden dinner party soon and will use burlap tablecloths with white hydrangeas. DH is going to hollow out some branches from our farm that we can place glass cylinder flower holders inside to hold the hydrangeas as the arrangement on round tables. You have some wonderful ideas to share and I have been cataloging them in my head. Thanks. This post was exceptional and good luck to your DD's new catering venture. BTW, the menu.......amazing.

Hi D!! Love it all and what an amazingly talented family you have. Will you adopt me? xo Kathysue

How neat that your family is working together and the results are AMAZING.

as always you've out done yourself.
I'd put in for a raise ...

Lovely collaboration
of lovely people,
tablescapes, food,
wine.....WOW, could
it possibly get any
better? And I LOVE
how you are supporting
your gal in her endeavors.
Delicious post!
xx Suzanne

Not only a beautiful table, but what a great story behind the setting. Your life is so different than my Oklahoma life. That is what is so wonderful about the blog world. We get to be exposed to so many different worlds. Love your tables every week. Lori L

Delores, what a delightful evening this must have been! The menu was incredible, the dessert sounded divine and, well, the tablescape was simply gorgeous! Talented family!
~Tammy

What a talented family you all are!!!
Brava!!!!
Everything looked amazing.
My compliments to the chefs.
And to you Dear Dolores... well, you rock my friend!!!!!
XO

Gorgeous table, gorgeous setting, gorgeous food, and gorgeous family! I's say the Arabians have it covered.
Thanks for sharing another beautiful post. ~ Sarah

GARDEN burlap!!! But, of course! I keep trying to struggle with that heavier stuff, and it never works out the way I'd like for it to. Garden burlap is lighter weight and easier to wrangle. Makes MUCH more sense! Thanks!!! The table is beautiful, and you lent great authenticity to it! Your "team" hit the nail square on the head!!! I admit, I would've been a teensy bit skeptical about the goat, too. I guess we never know until we try, though! :-) Thanks for stopping by my blog earlier tonight, and I hope you and yours have a great week!

I love keeping it all in the family! The table and the dinner are magnificent....you must all be proud of Chef Ashley! Thanks for stopping by today, yes, very excited for Italy! I am adding you to my sidebar today, not sure why I did not before...ciao :)

What a great family venture. I hope you have tons of fun.

ok. I promise not to repost this post. But I do love it as much as I loved the other one. Again, my invitation must have gotten lost in the mail. Its ok. I understand...lol

What a talented family you have! All of it looked beautiful and yummy. You must be very proud.

What a gorgeous setting. The ambiance was inviting. nice to work with family.

Where did you find the paisley tablecloth and runner? They look too precious to use as table toppers. The food looks fantastic! Congratulations on a wonderful presentation.
Gayle from Vintage Farmhouse

Delores,
Exquisite! The candlelight shots are amazing! The addition of your daughter's dishes made this a vision of loveliness! I adore how the "Old World Charm" is presented in the food and wine, decor, financial. . . all in the family. So European! Thank you for sharing this inspirational post!
Fondly,
Pat

Delores,
Beautiful tablescapes and how fun to have a daughter and son in the catering business...yummy!

OH my what a great backdrop to your wonderful table setting. The food looks absolutely wonderful. I know how proud you must be of your son and daughter's accomplishments! How fun that you get to do the tablescaping! Sounds like the job I'd want (plus sampling all the good food)
Thanks for stopping by my blog and commenting, I'm honored!
Liz

The food looks fabulous! What a great setting for dining. Love the family business - sounds like work, but fun work.

What a perfect setting for a dinner. Your table is just wonderful. I love to use garden burlap too. The food kills me it looks so fabulous. San Francisco for heaven's sake! The labels on the barrels! All the glasses lined up! The PORT! So glad I stopped by.

I love the idea of a family enterprise -- you are such an attractive and talented family.

I loved reading this post - how wonderful that you were all able to work together on this project. Reading over the menu made my mouth water. And I adore your tablescape - the burlap is the perfect touch, especially mixed with the white linen and wine barrels. Love the bar table too. Very nicely done.

Best of luck to the catering company.

Fabulous table and mouth watering menu! There is a lot of talent in your family. Enjoyed your blog:)

Not only is everything just perfectly beautiful...the table settings, the food and presentation...but I love that this is a family effort. You must be bursting with pride with such talented children and they obviously trust and respect your talents as well. Family...nothing better!

Delores, this is beautiful. It looks like a scene from a movie. What a talented team the three of you make. I love that you all work together to produce such fabulous events. OMG! That food presentation is beautiful too! laurie

WOW AND DOUBLE WOW ! You guys are on to something. 5* I came by today to ask you to come by my blog please, I want your input. thanks