Traditionally, the Armenians and Greeks dyed their eggs red for Easter, using the papery skins of yellow onions. The red eggs symbolize the blood of Christ.
I dyed my eggs yesterday, and they turned out beautifully! 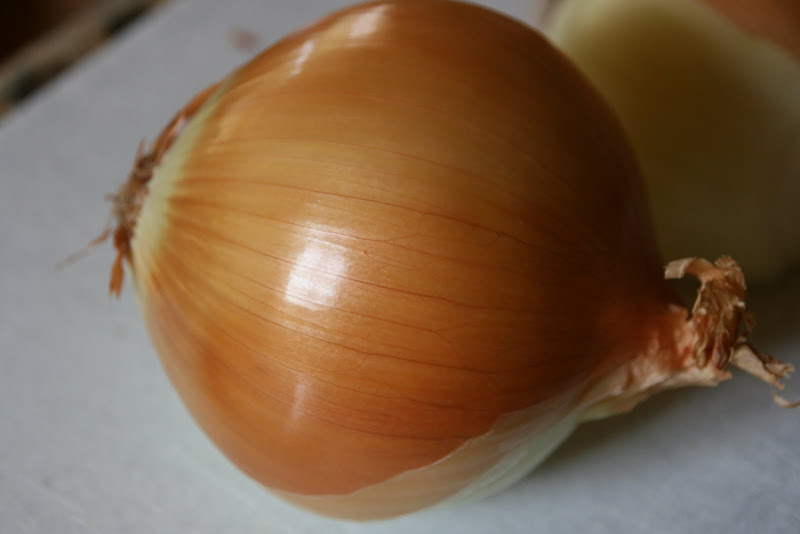 First, I took the skins of about 5 or 6 yellow onions and boiled them in water for at least 30 minutes. 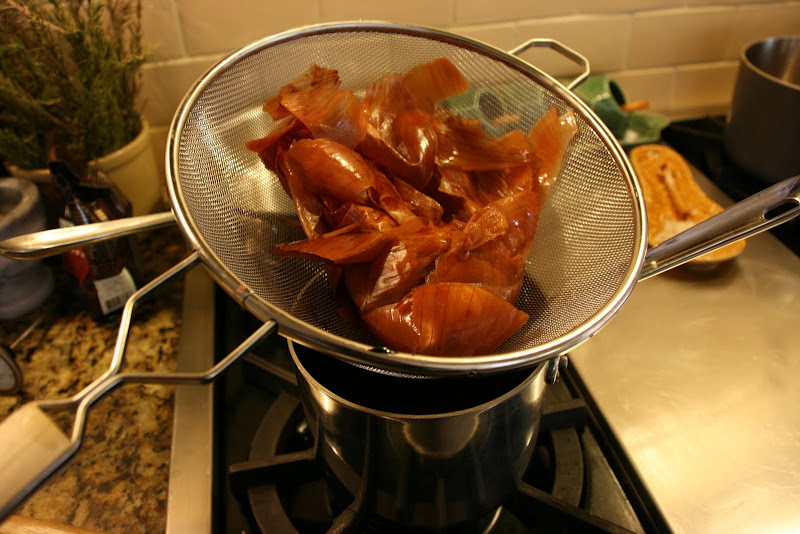 The liquid is then strained out... 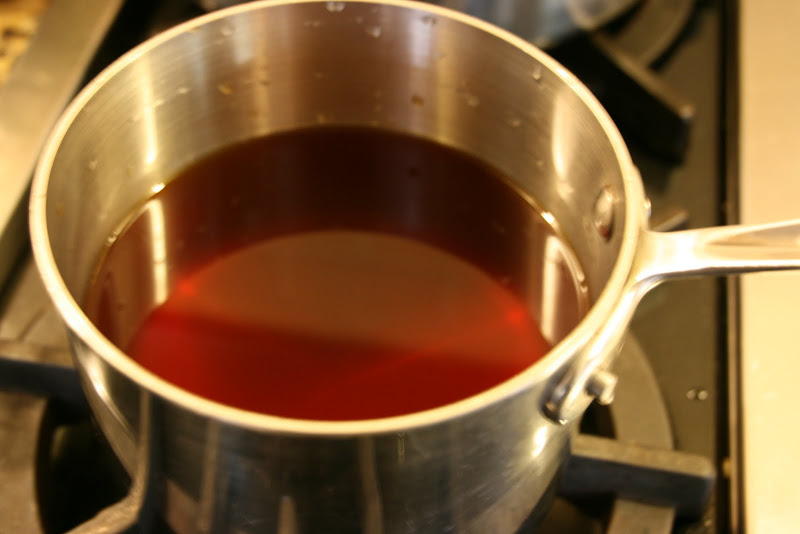 ...and the result is this orange color. 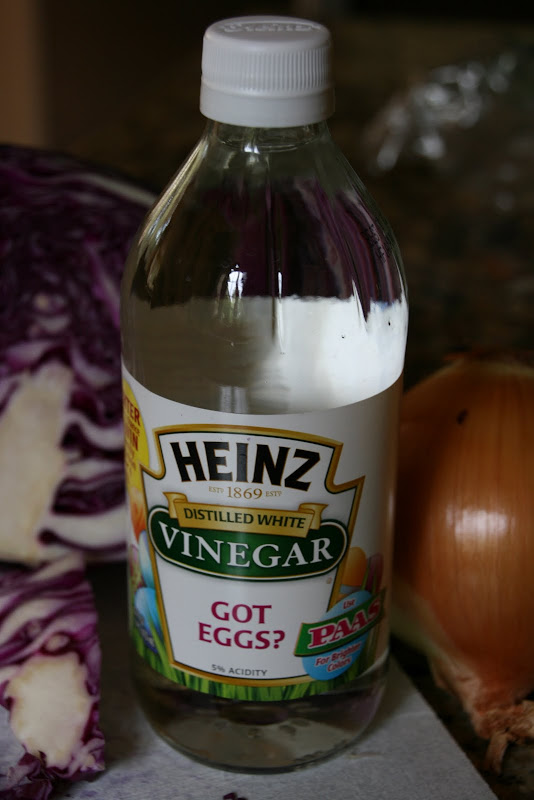 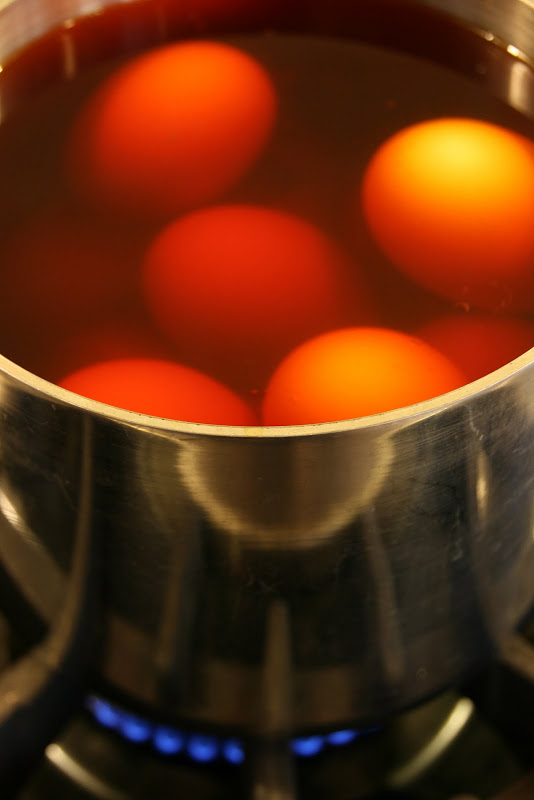 After the water is cooled, I put in the eggs and boiled them for 5 minutes, then turned off the heat and let them sit for a half hour, absorbing the color. 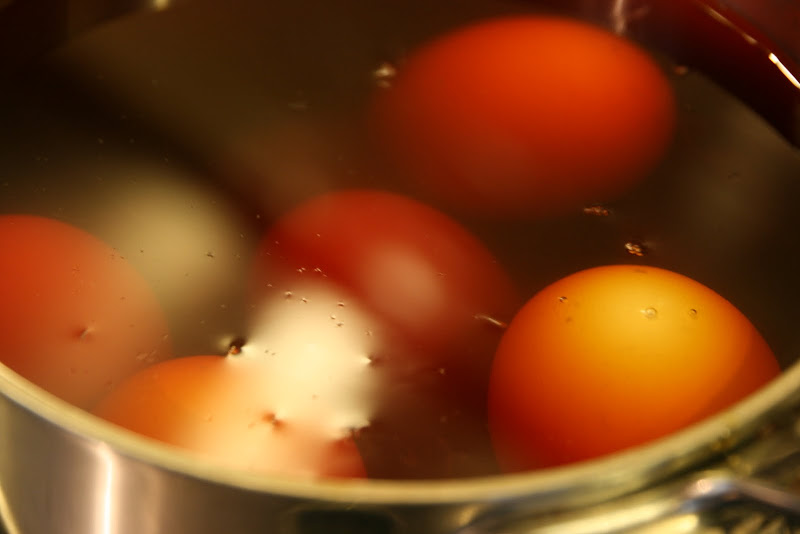 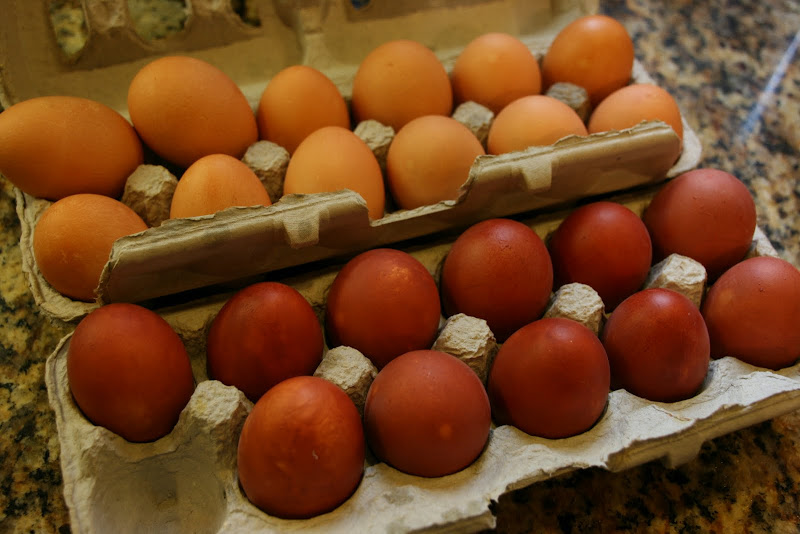 For variance of color, I pulled out some of the eggs earlier. They are a nice orange color. 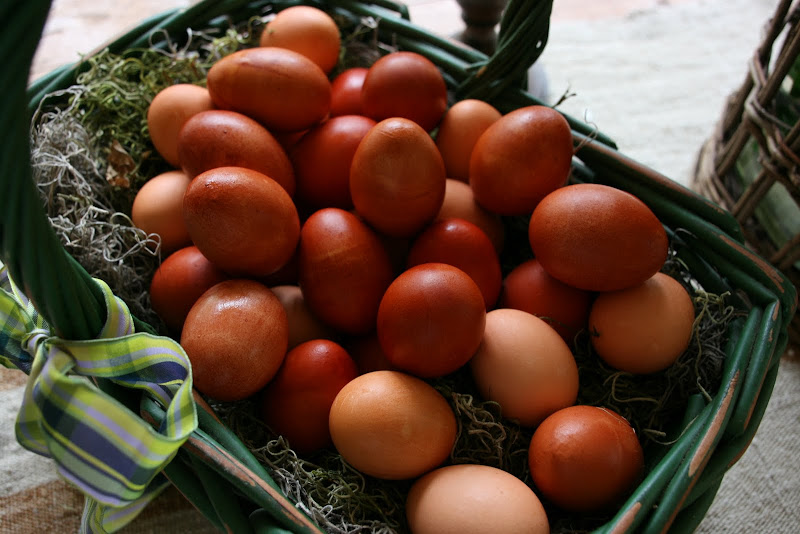 After the eggs are cooled, they are then "polished" with olive oil.
Aren't they beautiful? 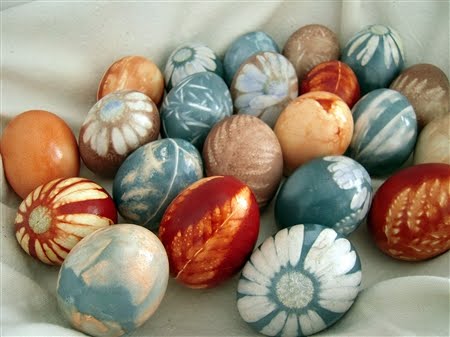 Bigsislilsis
What I also attempted to do, but failed miserably was to dye my eggs like this!
I saw this idea in April's Country Living magazine.
Blogger Sonia Bauer from Bigsislilsis.com wrote an article about dying Easter eggs with natural ingredients, even using flowers and Country Living put her right on the cover! 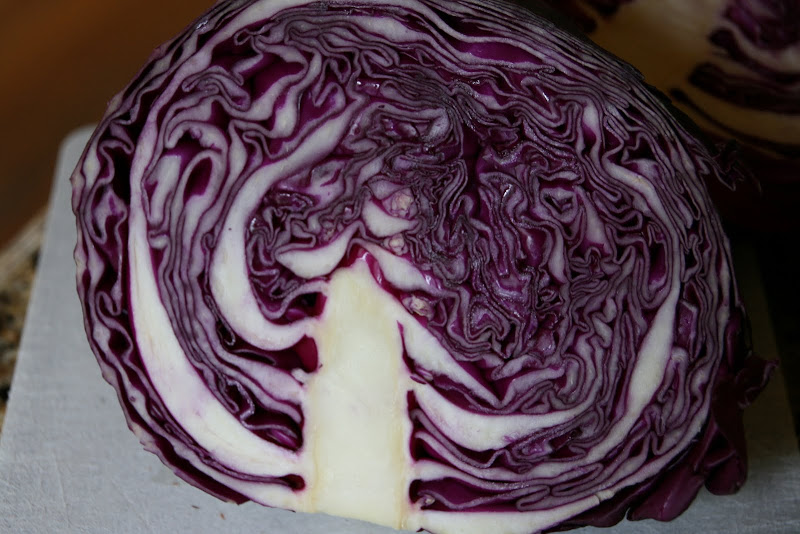 She said that purple cabbage makes blue eggs. However, my eggs didn't absorb the dye for some reason. The water was intensly purple, but it probably was too diluted. 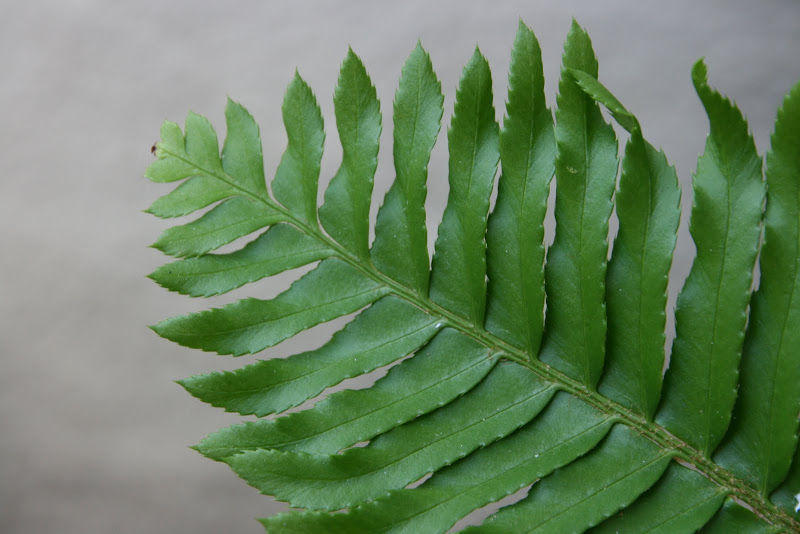 It looked like a lot of fun, so I gathered leaves from the garden to decorate the eggs. 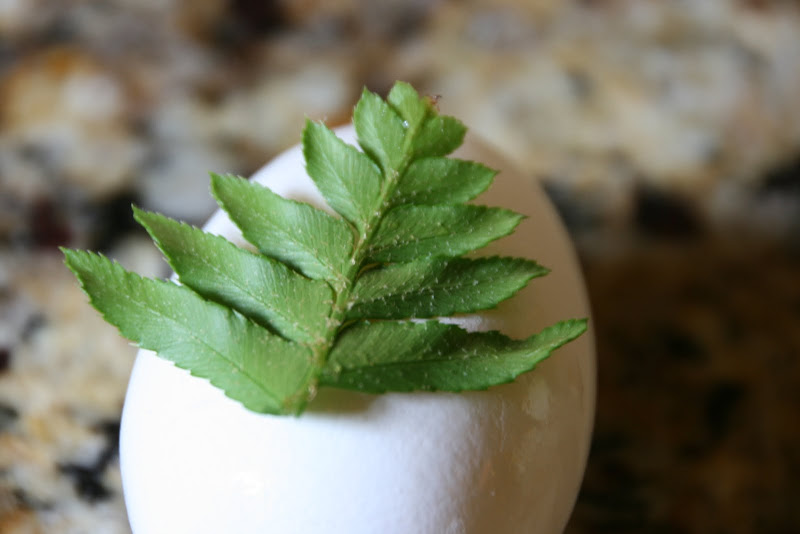 Laying the leaf on the egg.... 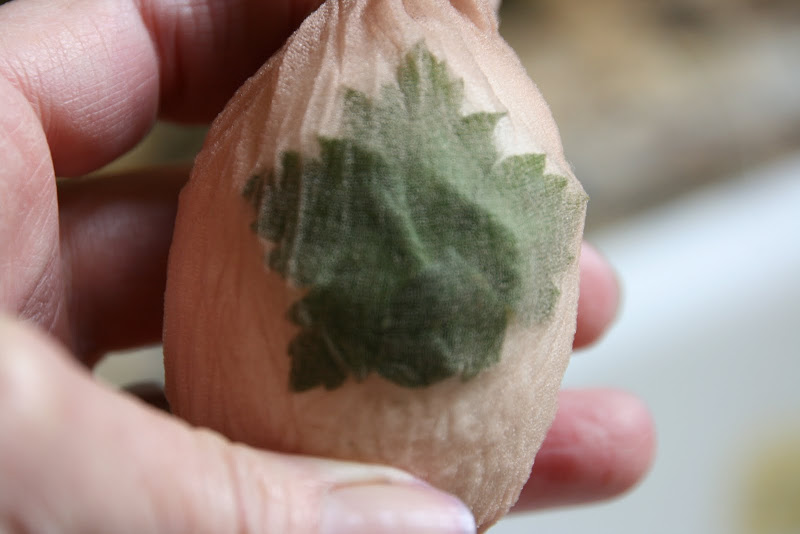 ...pantyhose is then wrapped around the egg before boiling.
Like I said, I failed miserably with this idea too! 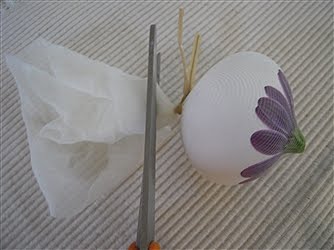 Bigsislilsis
If I had read the article before attempting this project, I would have known that the pantyhose must be wrapped tight and secured with a twist tie. Also, wetting the egg before putting on the leaf makes it stick to the egg better. 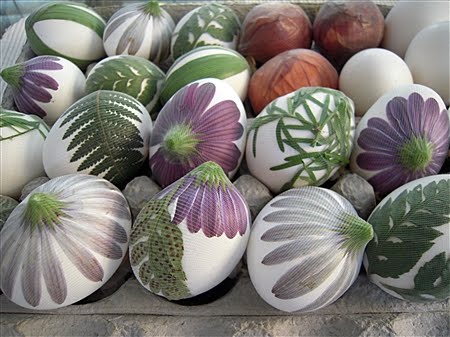 Bigsislilsis
Here is how her eggs looked before she dyed them. 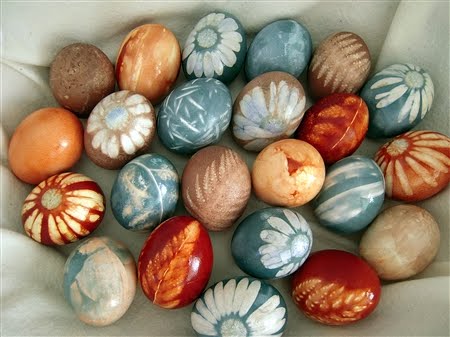 Bigsislilsis
The end result!
The step by step instructions are here. 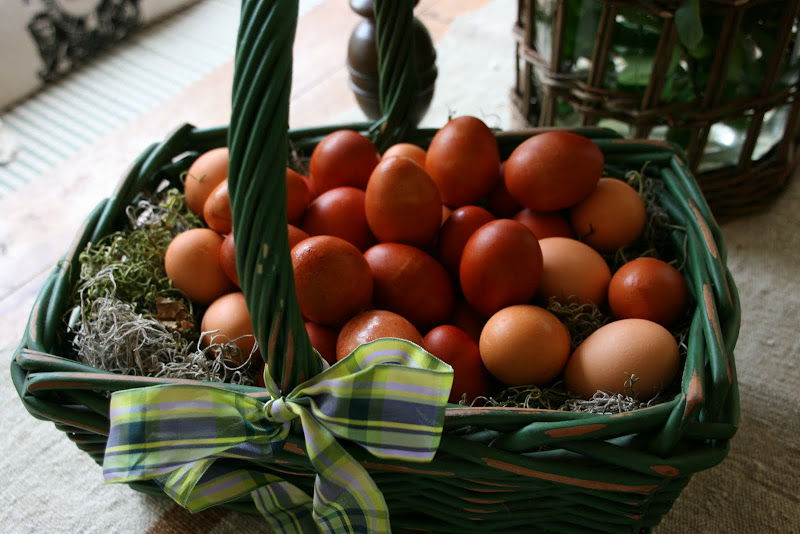 Although the blue botanical eggs didn't turn out, the red ones did.
My Mother-in-law will be happy to see that I honored the old tradition of dying eggs red.
Later today, we will have the traditional Armenian "egg fight!" More on that later.... 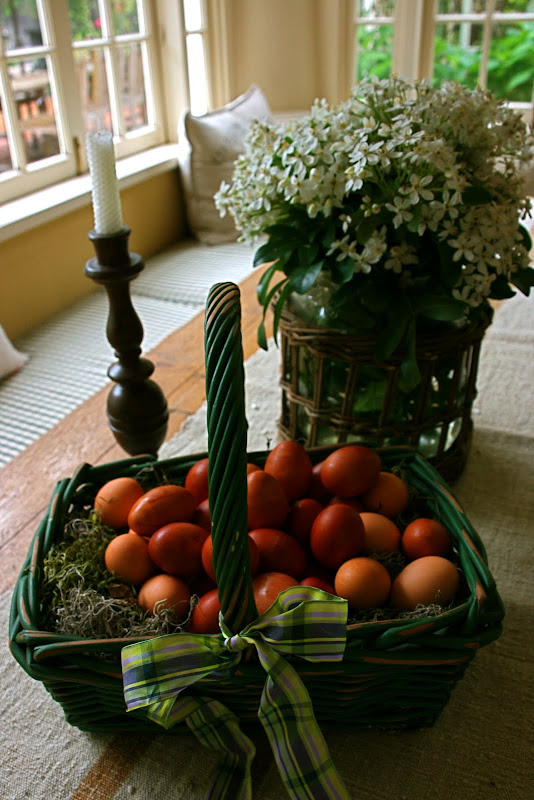 Posted by vignette design at 9:25 AM

I don't quite see how you failed I think they're lovely. Perfection looks mass produced, these look very artesianal.

All your eggs are beautiful !!! Ag from Greece

They turned out beautifully. We never color eggs having no particular tradition and preferring the chocolate variety around here. How long can a cooked egg sit out and still be edible?

These are gorgeous and I enjoyed this post. What a nice blog you have. Happy Easter.

Your red eggs are just beautiful..I love the color! Your process of dying is new to me but very interesting. Have a wonderful Easter.
Linda

Delores, I wanted to try this too, but just didn't get around to it. The natural dye is so pretty. Love the red eggs.
Hope you and your family are enjoying a delightful Easter Sunday. ~ Sarah

Wow! I'm impressed...such a creative endeavor that also has the potential of bringing the kid out in you. Happy Easter!

We're both enjoying natural eggs this Easter. It's great to have you be a part of Seasonal Sundays.

How interesting to learn about the Armenian and Greek traditions of egg dyeing for Easter and what they represent. The artistic designs from natural flowers and herbs are delightful. Look forward to hearing about the egg fight.

Blessings to you and your family this Easter.

Delores, thanks for sharing that tradition. Those red eggs are gorgeous. Sorry the other ones didn't turn out. Happy Easter!

Oh, I like your red eggs - what an amazing colour!!

Dear Delores, Your eggs are beautiful. I love their deep rich colors. We grew up using onion skins and red cabbage and red beets. I now use Acrylic paints but I still love the natural colors most of all.
Happy Easter to you and yours.

These are wonderful! And so creative. I don't want to wait until Easter rolls around again....I may need to serve them at breakfast for guests. I can't wait to try this! Thanks for the tips. -susan

Yours turned out pretty. I had no idea the brown onion skins would create that dark of a dye for the darkest ones. Another blogger tried the others with little success, but I can't remember who it was.
Hope you have had Happy Easter.
Glenda

Your eggs are very pretty! I can't wait to hear about the egg fight:@) Happy Easter!

I was telling someone about this process the other day. We used to do that too....and it seems to me we used blueberries for some deep blue ones. And I know mustard for some yellow ones. What fun those old methods are! Thanks for the post- lovely! xxxoo Diana

Hi D, I am so impressed once again with your talents!!!Love your Armenian traditions and next year I am going to do the Egg fight, that is so cool!!! Your eggs and table look wonderful as always. You are such a wonderful lady and decorator my dear friend. xo Kathysue

Absolutely stunning eggs. I love the materials you use. I am saving this post to use as my how to for Easter Eggs next year............We have ham on Easter too.

Delores, your onion dyed eggs are beautiful! What a wonderful idea! The traditional egg fight sounds like so much fun. I wish I had seen this before Easter. We might have tried incorporating that as a new tradition for our Easter gatherings. We eat ham for Easter dinner, but your dinner looks delicious. laurie

Delores,
Love your eggs and especially the tip to polish with olive oil. Great tip!!! Enjoy so much your posts and appreciate them so much....Thanks!
Happy Easter,
Gwen